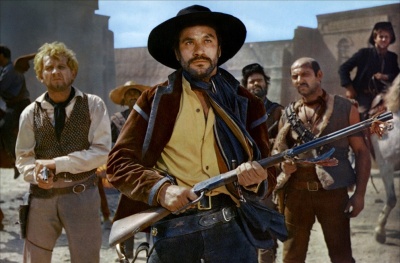 Alfredo Sanchez Brell (1931 – 2010), known as Aldo Sambrell, was a Spanish film actor, director and producer who made over 150 appearances in film between 1961 and 1996. He was best known for his roles of henchmen in "spaghetti westerns" (A Fistful of Dollars, For a Few Dollars More, The Good, The Bad, and The Ugly, Once Upon a Time in the West, A Fistful of Dynamite and others).