Eagle Eye is a 2008 American action thriller directed by D.J. Caruso and starring Shia LaBeouf as Jerry Shaw, a college dropout who finds out that his identical brother has died and then discovers that he is being framed as a terrorist and must go on the run in order to clear his name. The cast included Michelle Monaghan, Billy Bob Thornton, Rosario Dawson and Michael Chiklis.

The following weapons were used in the film Eagle Eye:

A blued Desert Eagle in .50 AE is seen in Jerry Shaw's (Shia LaBeouf) apartment when he is framed as a terrorist. 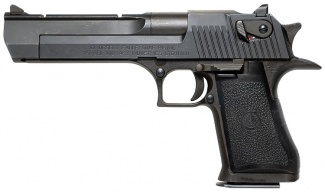 A close-up of the Desert Eagle.

The Glock 17 is used on several occasions in the film. Police officers are seen pulling their Glocks on the armored car guards. A Glock is also pulled on Jerry during his confrontation with ARIIA. Jerry Shaw (Shia LaBeouf) also fires a Glock while wearing a Capitol police uniform at the Library of Congress.

A police officer holds his Glock 17.

A Glock 17 is taken from a fallen Marine.

A Glock 17 is also pulled on Jerry during his confrontation with ARIIA.

Jerry (Shia LaBeouf) fires a Glock 17 while disguising as a Capitol policeman at the Library of Congress.

FBI Special Agent Thomas Morgan (Billy Bob Thornton) uses a SIG-Sauer P229R as his duty weapon. He later gives it to Jerry Shaw along with his badge. Jerry also grabs this gun in the airport scene after Morgan drops it. Jerry later puts it on a metal cart when he escapes the airport. In the tunnel scene, Morgan's weapon changes from a P229R to a P229R DAK (Double Action Kellerman). 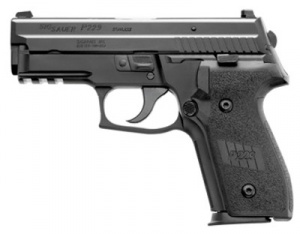 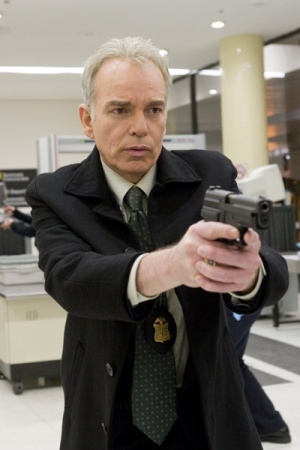 Thomas Morgan (Billy Bob Thornton) with his SIG-Sauer P229 in a promotional still.

Thomas Morgan (Billy Bob Thornton) runs through the airport with his SIG-Sauer P229.

Thomas Morgan (Billy Bob Thornton) runs through the airport with his P229.

Air Force Office of Special Investigations (AFOSI) Special Agent Zoe Perez (Rosario Dawson) uses a SIG-Sauer P228, the AFOSI standard issued weapon. In a continuity error, Jerry (Shia LaBeouf) has a P228 instead of the P229 Morgan give him in the tunnel scene.

Jerry with Morgan's pistol. This appears to be a P228 (this is a continuity error since Morgan gave his P229 to Jerry and this ISN'T the P229 which Morgan had).

An FBI agent bursts into Jerry Shaw's apartment with his MP5A5.

Jerry Shaw (Shia LaBeouf) and Rachel Holloman (Michelle Monaghan) each take a pistol-gripped Remington 870 with a high-capacity magazine tube from the back of an armored car, and they use the shotguns to threaten the guards that are carrying the package. 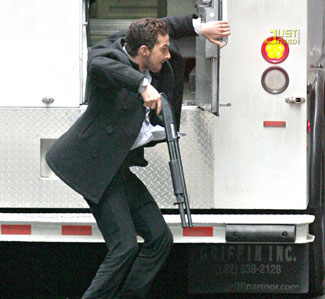 At the beginning of the film, an AKM fitted with a GP-25 grenade launcher is seen in the hands of a tribal fighter.

An AKM fitted with a GP-25 grenade launcher is seen in the hands of a tribal fighter.

The AKM in the background.

An Armalite AR-10 fitted with a scope and a suppressor is held by a Special Forces soldier tracking terrorist target.

The Barrett M82A1 sniper rifle is seen disassembled in one of the packages that Jerry Shaw opens, along with a few dozen rounds.

Jerry Shaw finds a Barrett M82A1 in his apartment.

What appears to be an M16A2 is slung on the shoulder of a US soldier at the airport.

A US soldier attached to Homeland Security guards the airport with an M16A2.

Other Special Forces soldiers are seen with what appear to be M4A1 Carbines.