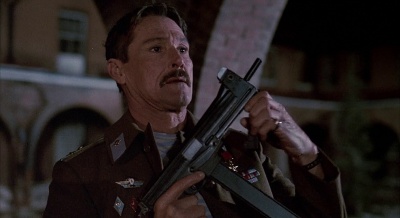 William Smith holds an Iver Johnson Revolver as the Store Clerk in The Outsiders (1985).

William Smith (1933-2021) was an American actor who made a career of playing tough guys. He gained early fame playing cowboys and later bikers or thugs. He did a stint as a regular in Season 12 of the television show Hawaii Five-O as Detective James "Kimo" Carew, and is most remembered to movie fans as Conan's Swordmaker Father in Conan The Barbarian and as the complex Colonel Strelnikov in Red Dawn. His career spanned approximately 75 years, he appeared in almost three hundred feature films and television productions. He passed away on July 5, 2021 at the age of 88.