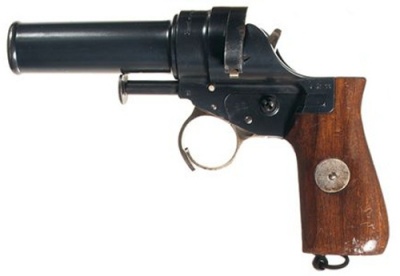 The vz. 30 was a signal pistol produced in Czechoslovakia by CZ for military use. Manufacture was halted by the outbreak of World War II with just over 24,000 having been produced, and the Vz. 30 went on to be used by the occupying German forces so a large number can be found stamped with the Nazi Eagle acceptance markings. The weapon feature a somewhat atypical loading mechanism whereby it has a breechblock that swings out to the side allowing a cartridge to be inserted into the fixed barrel, with empty/unused cartridges being removed from the breech via a manual extractor located under the barrel.

The Vz. 30 Flare Pistol and variants can be seen in the following films, television series, video games, and anime used by the following actors: