From Internet Movie Firearms Database - Guns in Movies, TV and Video Games
(Redirected from The Big Trail)
Jump to navigation Jump to search 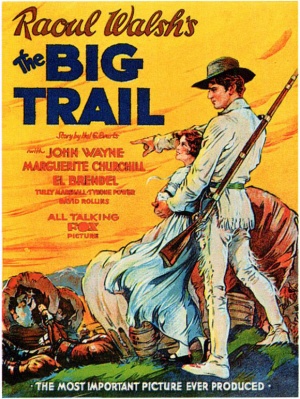 The Big Trail (1930) is a little remembered Western masterpiece directed by Raoul Walsh (The Roaring Twenties, White Heat, The Enforcer (1951)). Filmed entirely on location and featuring stunts that have never been duplicated or topped, the movie was the first starring role for John Wayne. Most moviegoers only saw the 35 mm print of the film, but the screenshots below come from the seldom seen, 70 mm Fox Grandeur version, which was the first but short-lived widescreen movie format in America. The two versions differ in story, script, direction, and stunts, with the 35 mm print vastly inferior to the 70 mm version. The film also starred Marguerite Churchill, El Brendel, Tully Marshall, and Tyrone Power Sr. (as Tyrone Power). An honest scout (Wayne) keeps a close eye on a trio of thugs, who lead a wagon train across canyons, rivers, deserts, blizzards, and Indian land to California in the 1850s.
The following weapons were used in the film The Big Trail:

Throughout the film, scouts and settlers carry the Enfield Pattern 1853.

Breck is welcomed to the train.

Breck hunts buffalo with the Enfield.

…and take up weapons.

Zeke and Breck deliver the wagon train to California.

Throughout the film, Breck (John Wayne) carries a Remington 1858 New Army revolver. While billed as being a percussion revolver in the film, in reality the gun is an original nickel plated Remington New Model Army cartridge conversion that was altered to fire .38 S&W blanks. The use of cartridge conversions in place of actual percussion revolvers was a common practice in Hollywood throughout the 20th century, due to the ease of using blank cartridges as opposed to loading blank charges in a percussion firearm. For more info on this gun, click here. 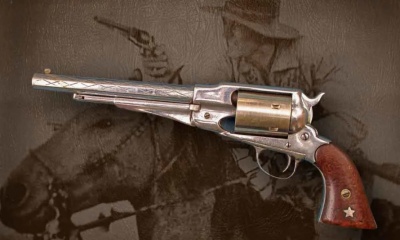 The actual engraved, nickel-plated Remington New Model Army cartridge conversion used by John Wayne in The Big Trail. This gun is currently in the collection of Al Frisch. For more info on this firearm, see this article. Photo courtesy of Phil Spangenberger of True West magazine.

Breck turns in his Remington for repairs. Note the distinctive Remington top strap.

Breck with his holstered Remington. Note the grip screw, distinguishing it from a Colt.