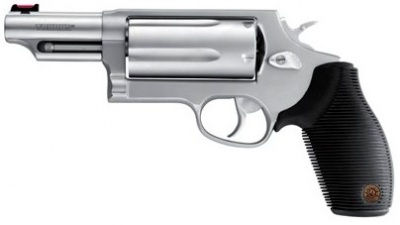 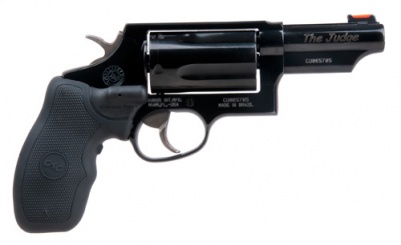 The Taurus Judge is a Brazilian hybrid revolver. The revolver is noted for its ability to hold five rounds of either .45 Long Colt cartridge or .410 bore shotgun shells. Both are the same dimension and fit the cylinder the same (similar to .38 Special and .357 Magnum). This allows the stopping power of a .45 LC to stop a charging animal or the scattering capability of a .410 round to kill a snake. In most cases for films, .45 LC blanks are used.

The Judge was originally a derivative of the Taurus Tracker and formerly designated the model 4410. It earned the current name in 2006, when Taurus learned that the revolver was popular among judges in Miami, Florida as a personal protection weapon. The current production model is designated the model 4510 (a blending of ".45 Long Colt" and ".410 bore").

The Taurus Judge and variants can be seen in the following films, television series, video games, and anime used by the following actors:

The Taurus 4510PLYFS is a compact version of the original Judge that also possess a lighter polymer frame. 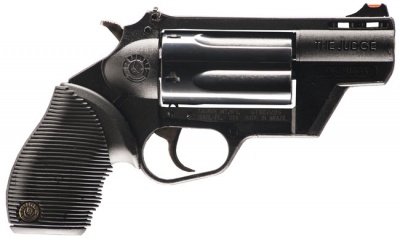 The Taurus 4510PLYFS and variants can be seen in the following films, television series, video games, and anime used by the following actors: 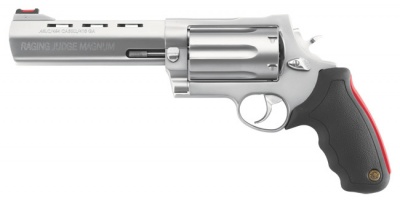 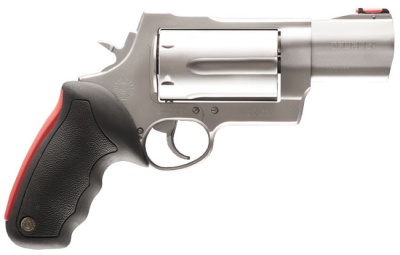 The Raging Judge is a derivative of the Taurus Judge designed to accept the same .45 LC and .410 shotshell rounds as the Judge as well as the significantly more potent .454 Casull round.

The Raging Judge XXVIII was a prototype of the Raging Judge chambered in 28 gauge shotshells unveiled at SHOT Show 2011. It never entered production due to legal issues: while it is not legally a handgun (as it is a smoothbore) or a shotgun (as it has no stock), it would be an NFA-restricted "any other weapon" as it is small enough to be "readily concealable" and could also be restricted as a "destructive device" as it exceeds the caliber limit (28 gauge being 0.55 inches, while the limit is 0.50) and was unlikely to pass the sporting purpose test for shotguns. Taurus claims they invited members of the Bureau of Alcohol, Tobacco, Firearms and Explosives (BATFE) to discuss the legality of the variant and that no determination was made at the time. Despite this, the weapon never saw mass production and no statement about its fate was ever issued by Taurus.

The Taurus Raging Judge and variants can be seen in the following films, television series, video games, and anime used by the following actors: