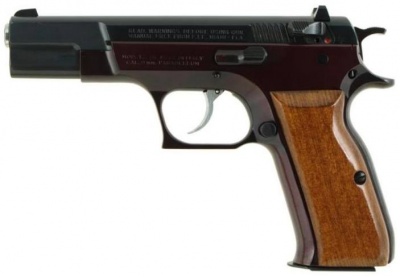 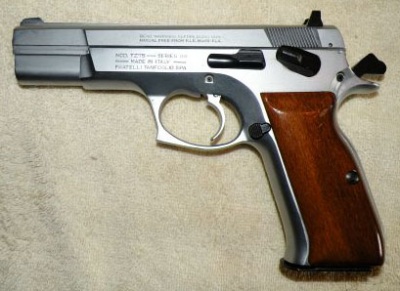 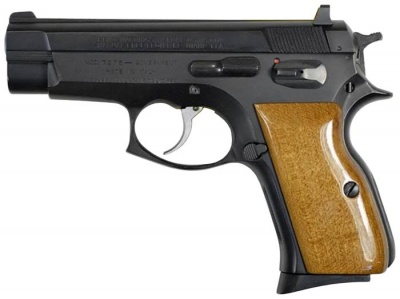 Tanfoglio TZ-75 Government - 9x19mm. This is the compact variant of the "Series 88" guns and features a 3.5 inch barrel and 12 round magazine.

Tanfoglio TZ-75 is a clone of CZ-75 produced by Italian manufacturer Fratelli Tanfoglio S.P.A.. "Pre-88" version of TZ-75 has a slide-mounted decocker safety while "Series 88" has a frame-mounted manual thumb safety, like the original CZ-75. The "Series 88" was capable of being converted to other calibers by simply changing the barrel, recoil spring and magazine meaning that it is able to fire 9x19mm, 9x21mm, .40 S&W and .41 AE ammunition. Both models were also produced in compact versions, as well as various custom models. The TZ-75 was originally imported into the USA by F.I.E. between 1982 and 1989. It was also imported by Excam between 1987 and 1991 as the TA 90 and although still stamped "Tanfoglio" was marketed as a "Tanarmi" (a contraction from the name of the original Italian manufacturer, "Armi Fratelli Tanfoglio"). Eventually the TZ-75 evolved into the T95, which was imported into the USA as the EAA Witness.

The Tanfoglio TZ-75 and variants can be seen in the following films, television series, video games, and anime used by the following actors: