Angel of Evil (Vallanzasca – Gli angeli del male) is a 2010 Italian crime drama directed by Michele Placido. It is based on the biography of notorious bank robber of 1970s Renato Vallanzasca.

The following weapons were used in the film Angel of Evil (Vallanzasca - Gli angeli del male):

Enzo aims his Python at security guards during the robbery of cash truck.

Armando holds his Python at the right during the bank heist.

Rosario holds the revolver during the robbery of the cash truck.

Armando fires the revolver during the shootout on Piazza Vetra.

Most widely used handguns in the movie are Beretta 92S pistols, indetified by the rounded trigger guard, the magazine release catch on the bottom of the grip and non-ambidextrous safety. Their appearance in pre-1977 events is anachronistic. Beretta 92S is the preferred weapon of Renato Vallanzasca (Kim Rossi Stuart). Several of his accomplices and numerous police officers also use Beretta pistols. 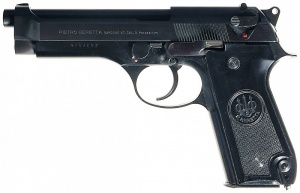 Beretta Model 92S - 9x19mm. This is one of the earliest Beretta 92 variants. Note the magazine release button on the bottom of the pistol grip and early style magazine floor plate.

Renato with Beretta 92S and Norinco Type 56-1 during the robbery of the cash truck. 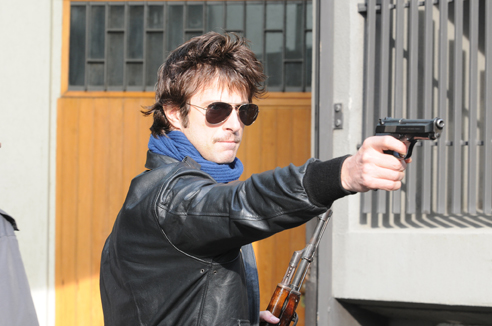 The same scene on the promotion still.

Renato holds a prison guard at gunpoint while releasing his friend Beppe from prison.

Renato fires his Beretta during the massacre of Turatello's henchmen.

Sergio (Moritz Bleibtreu) fires his Beretta during the shootout on Piazza Vetra.

A police officer fires his Beretta in the same scene.

A police officer draws his pistol during the ambush on the road.

Renato fires in the same scene.

During the shootout on the road block Nunzio (Lino Guanciale) uses the Tanfoglio TZ-75 pistol. 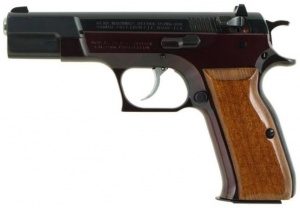 Nunzio fires his Tanfoglio during the shootout on the road block.

During the shootout on Piazza Vetra in Milan Fausto (Gaetano Bruno) uses the Walther PP.

During one of the bank heists Rosario (Nicola Acunzo) is armed with the Walther P38.

In one scene an unidentified pistol is seen in hand of dead Renato's elder brother Ennio (uncredited).

The pistol appears to be some compact Beretta.

A police officer holds his Beretta M12 on the road block.

A police officer fires the Beretta M12 during the shootout on the road to Bergamo.

Another police officer fires the Beretta M12 in the same scene.

The unloaded MP40 is seen at the left, over the bag and the shotgun.

A pair of Sten Mk II SMGs is seen among the guns that Renato purchase for his gang. They aren't used in action.

Two Stens are seen on the table.

During the first robbery of cash truck, commited by Vallanzasca's gang, Nunzio (Lino Guanciale) is armed with the Mossberg 500 shotgun.

During the massacre of Turatello's henchmen, Fausto (Gaetano Bruno) uses the Mossberg 590 Compact Cruiser with rifle sights. This gun is anachronistic for 1970s.

The shotgun is seen at the left (below the MP40) when Vallanzasca purchases weapons.

Renato aims his Type 56-1 during the robbery of the cash truck. Note the hooded front sight.

Renato with Beretta 92S and Type 56-1 on the production image of the scene.

Sergio holds the Type 56-1 during the bank heist.

Another view of the gun in Sergio's hands.

The gang leaves the bank.

The AKS-47 (note the open front sight) is seen at the far right when Vallanzasca purchases weapons.

The open front sight is seen.

Full-stock AK-47 or Norinco Type 56 is used by Sergio (Moritz Bleibtreu) in one scene. It isn't seen clear enough to identify the exact model.

Norinco Type 56, milled receiver without the under-folding ("pig sticker") bayonet - 7.62x39mm. This is the "sanitized" (M22-code) exportversion made with no factory markings and the selector markings in the latin alphabet (L for full-auto and D for semi-auto).

Sergio holds the full-stock AK at the left. 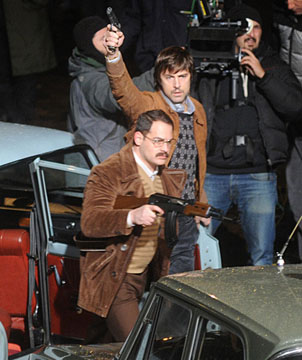 Sergio holds the AK on the production image of the scene.

A gunrunner at the left holds the Mk II grenade when Vallanzasca purchases weapons.

Renato Vallanzasca (Kim Rossi Stuart) puts the grenade on the gaming table during the heist in Francis Turatello's casino. The grenade looks more like a mockup.
Retrieved from "https://www.imfdb.org/index.php?title=Angel_of_Evil_(Vallanzasca_-_Gli_angeli_del_male)&oldid=1106006"
Categories: