FN Minimi 1974 pre-production army trial model. Note the lack of a STANAG well: this feature was developed later, being patented in 1977. 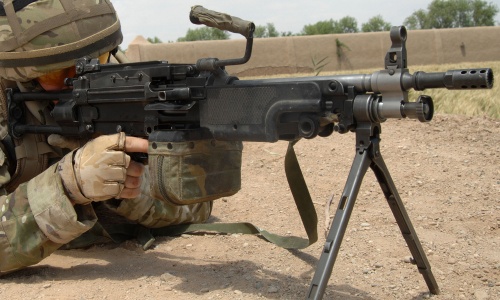 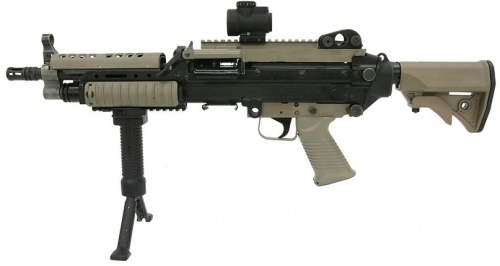 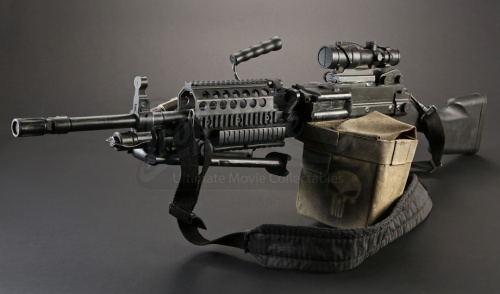 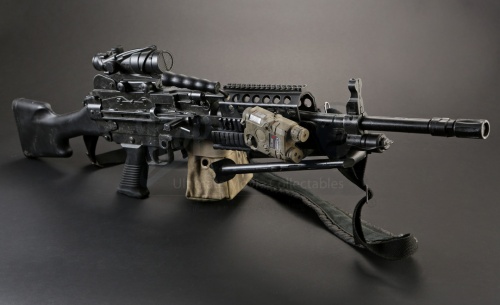 Screen used stunt Mk 48 Mod 0. Note that the AN/PEQ-15 is seemingly knocked loose, possibly from the weapon being dropped. Image from Prop Store of London.

My dad REALLY wants an M249. Is this impossible?

There are a handful of transferable FN Minimis in the United States. Long Mountain Outfitters had one for sale, but it was priced at about $100,000. -MT2008

Ohio Ordnance makes semi & full auto versions of many machine gun designs, including the FN Minimi, don't know about pricing, or how much red tape you'd have to go though but here's their site. http://ohioordnanceworks.com/

Very uncommon the Minimi is unreliable with any sort of magazine. It's a mechanical flaw in the feed system. The weapon runs great with belts but put in a magazine and the reliability drops to nothing. Rockwolf66 18:32, 6 April 2011 (CDT)

I highly doubt a standard Beta-C mag would work in a Minimi. Not for mechanical reasons, but due to the geometry. On an AR-15 the drums on the Beta-C extend upwards either side of the receiver of the gun. If you tried to use an M16 Beta-C mag on a Minimi the drums would hit against the receiver before it was seated in the well. However, they do make a version of the C mag for the Minimi which has a higher tower to get around this, and it also has slightly different geometry at the top which means it doesn't get eaten by the Minimi like a normal STANAG mag. I believe the special Minimi mags are a lot more reliable than STANAG ones, but TBH I don't get the point as the C mag looks very in the way hanging off the side like that, not to mention it would totally bugger the weight distribution. Also, particularly with that stupid high tower, it would really be difficult to carry multiples of these so I don't think they offer any real advantage over belts. --commando552 (talk) 13:12, 23 November 2013 (EST)

Note that rather than a belt in a box, Boulanger is using a Beta-C drum mag inserted into the magazine well.

A little know secret is that the Minimi was originally designed in 7.62 Nato but then Nato changed to the 5.56 Nato round and so did the Minimi. I believe that there is no major parts commonality between systems due to the change in calibers. As for the reason for the change the SEAL's had the Mk44(M60E4) in their inventory at the time they decided to replace it with the Mk48. If you ever used or worked on these systems you would know what a big POS the M60 systems is compared to the Mk48 or M240.--phoenixent 17:30, 21 November 2011 (CST)

While they M60 had been used since the Vietnam war I think they changed to the MK48 as they can use most of the parts from a M240 or a MK46 machinegun. As far as the MK46/MK48 goes I can't currently confirm it independantly but I read that the only changes between the Mk46 and the Mk48 is the barrel, bolt and feed tray. Since that comes from a Gun magazine I can't really trust it 100%.Rockwolf66 21:13, 5 August 2012 (CDT)

Below is an image of the L110A2, which is a British variant of the Para Minimi which has a 19mm dovetail rail with a removable rail mounted rear sight: 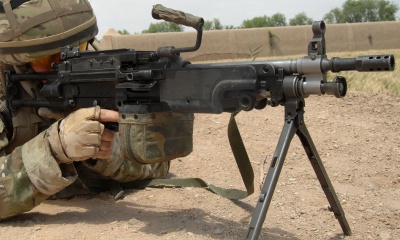 I am sure I have seen a game where it is used with the rail mounted rear sight installed (it is used in Project Reality when a SUSAT is mounted) but I can't seem to find it. I think it was from a recent or upcoming game where British forces are portrayed (it isn't ArmA II) and the image I have in my head was a render rather than an in game image. Can anyone think what this could be? At this point am starting to think it might have been a mod I came across rather than a game, or I imagined it. --commando552 05:45, 3 August 2012 (CDT)

Just gonna add my belated comment, I would argue that splitting the different sections makes sorting examples easier since we don't have to specify "Mark 0" or "Mark 1" variant in the tables. I would personally argue that the Mk 14 variants on the M14 page should be split, and that the M16 page should be completely overhauled and split into several smaller pages. --Wuzh (talk) 23:03, 9 December 2018 (EST)

How I can tell the differences between the the original, various licensed models,the unlicensed models, the wz.2003,well you get the point?--Dannyguns (talk) 14:51, 2 May 2017 (EDT)

As far as I know there is zero relation between the Kbkm wz. 2003 and the FN Minimi, aside from the fact that they are both chambered in 5.56x45mm fed in M27 belts. As for how to tell the difference, as I said they are basically totally different guns so there are a hell of a lot of differences, just compare this to this, the most obvious differences from afar are the rear sight/sight rail, stock, and handguard. --commando552 (talk) 15:54, 2 May 2017 (EDT)

Since I really can't find any source on those two supposed variants and what they describe, and nobody's replying here, I'm gonna consider those two terms unreliable. --Wuzh (talk) 14:46, 10 December 2018 (EST)