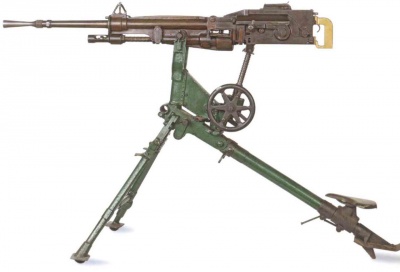 The St. Étienne M1907 is an air-cooled, gas operated, strip fed heavy machine gun of French Production, which was in use during World War I and partially World War II. It was developed by the French arms factory Manufacture d’Armes de Saint-Etienne (MAS) in 1906 as compensation for the miserable Puteaux M1905. Like the Hotchkiss rival model, the St. Étienne is a gas-fueled loader. However, the gas piston with a rear-mounted rack is pushed forward, the power transmission to the closure is cumbersome via a gear, the closing spring is largely open under the barrel. The firing cadence of the weapon can with a hydraulic, inherited from Puteaux predecessor delay device between 500 and 8 rounds / min. be regulated.

This device made the already sensitive to pollution and unreliable weapon additionally complicated. These problems were aggravated by the inferior material added. The steel used was not heat resistant enough; with continued firing either closure parts tended to break or the closing spring tamped. The MG was loaded by laterally supplied loading frames, which bent slightly and represented an additional weak point. A total of 41,000 copies of this weapon were made (30,000 in St. Etienne and 11,000 in Châtellerault).

During World War I it was replaced by the Hotchkiss M1914 Machine Gun because it has too many shortcomings in trench warfare. When the United States entered the war, France equipped the US Army with this machine gun. The remaining copies were sent to the colonies and 4,720 copies for the equipment of the Italian army. To support the reconstruction, the Greek army received in 1917 about 2000 copies, of which later a certain number installed in the Metaxas Line and were used until the German invasion of 1941. In 1940, it is still in small numbers in the French army in use in the second category units as a fortress or anti-aircraft weapon.

The St. Étienne M1907 Machinegun and variants can be seen in the following films, television series, and video games used by the following actors: