Soylent Green is a 1973 science fiction film starring Charlton Heston as a police detective who investigates a murder in a future New York devastated by overpopulation and pollution. The film is considered by some to be part of Charlton Heston's unofficial trilogy of post apocalyptic films which included Planet of the Apes (1968) and The Omega Man.

The following weapons were used in the film Soylent Green:

The Colt Detective Special is the handgun carried by Detective Robert Thorn (Charlton Heston). A suppressed Colt is seen used by Fielding (Chuck Connors) and Gilbert (Stephen Young). In some scenes, the revolver appears to be fitted with a hammer shroud. 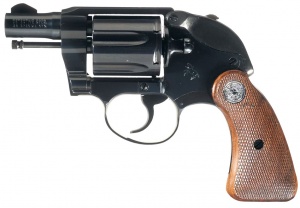 A suppressed Colt is seen fired by Gilbert (Stephen Young).

The suppressed Colt is seen in the hands of Gilbert (Stephen Young).

The Colt Detective Special is fired by Thorn (Charlton Heston).

Fielding (Chuck Connors) holds the revolver while pursuing Thorn. Here the revolver doesn't have a suppressor, but when he enters the church a moment later, one is attached.

Fielding now holds a revolver with a suppressor attached.

Closeup of Thorn's revolver. Here it appears to be fitted with a hammer shroud.

Fielding takes out a backup revolver while pursuing Thorn.

The guard in front of Thorn's and Fielding's apartment as well as the guards in front of the processing plant carry the M16(SP1).

A guard outside Thorn's apartment is armed with the M16.

Outside Fielding's apartment, a man is armed with an M16 rifle.

Guards at the Soylent recycling plant are armed with M16 rifles.

Guard armed with the M16 at the plant.

An M1917 Enfield appears to be briefly seen in the hands of a gas-mask clad US Army soldier during the film's opening montage.

An M1917 Enfield appears to be in the hands of a gas-mask clad US Army soldier during the film's opening montage.
Retrieved from "https://www.imfdb.org/index.php?title=Soylent_Green&oldid=1546521"
Categories: