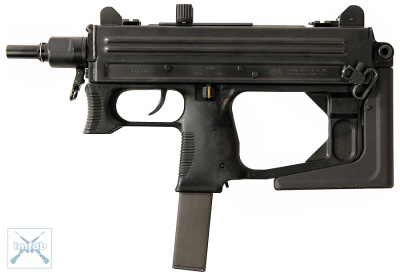 The Ruger MP9 is an American 9x19mm submachine gun introduced in 1995. It was created by the famous Uziel Gal and is similar to the Uzi, his most famous creation. The MP9 uses a telescoping bolt, but fires from a closed bolt. The gun also has a quickly detachable barrel that is spring-loaded to cushion the impact of the bolt on closure. Despite incorporating several design improvement and being recognized as an improvement over the Uzi, the weapon that inspired it, the MP9 was a commercial failure and never attracted attention from any government agencies, its target market. Approximately 1,500 were produced for only a single year and marked Ruger's first and, so far, only foray into the submachine gun market.