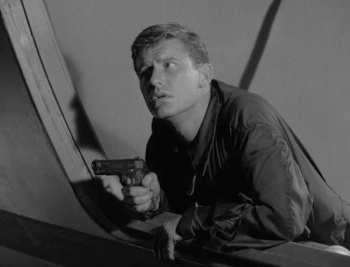 Roddy McDowall as Private Morris holds the M1 Carbine in The Longest Day.

Roddy McDowall was a British actor who had an illustrious career as both a child performer and later in more mature roles. His best known role was as the apes Cornelius and Caesar in the Planet of the Apes movie series.