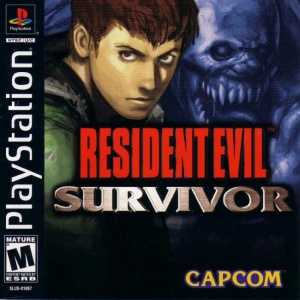 Resident Evil Survivor is a Playstation FPS where the player is Ark Thompson, Private Investigator and friend of R.P.D. Officer Leon Kennedy. Acting on information supplied by him, you investigate an Umbrella facility in Europe called Sheena Island.

Handguns are your primary weapons throughout much of the game. There are four basic 9x19mm handguns, and two revolvers - only one of which was actually included in the game. Ark carries a limitless supply of 9x19mm ammunition.

The Glock 17 (referred to as Handgun A) is Ark's starting weapon. A good overall gun with a decent rate of fire, reload speed and a good magazine capacity (an accurate 17 rounds). Like all the "Handguns" in the game, this fires 9x19mm ammunition, of which Ark has a limitless supply. 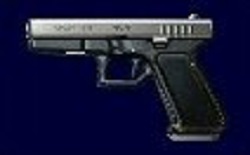 A "Pre-B" CZ 75 (referred to as Handgun B) can be found in the Hospital. The CZ-75 has a 15-round magazine and the fastest rate of fire of any "Handgun" in the game, although as drawbacks: it has the lowest damage per shot and a somewhat long reload time. It fires as fast as you can tap the fire button, which essentially turns this into a quasi-machine pistol in the right hands. Much like all handguns in the game, it comes with infinite ammo.

The gun is also found in the hands of the main antagonist: Vincent Goldman, when he is confronted near the end of the game. 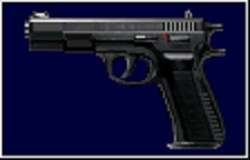 A Beretta 8000 Cougar F (referred to as Handgun C) can be found in the Arcade, the Cougar has a decent rate of fire, fast reload, and good damage. Like the Glock, it's pretty balanced, although it has slightly better reload speed and damage than the Glock. Has a 15 round magazine. 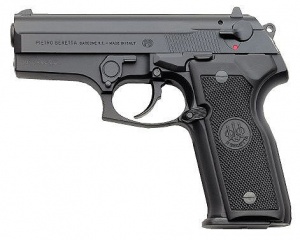 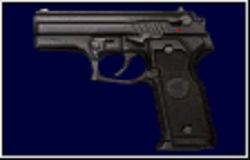 A Nambu Type 14 (referred to as Handgun D) can be found in the Library, the Nambu seems to have been magically rechambered to 9x19mm from its original 8x22mm Nambu cartridge. This is a late model, with "minor improvements" - though, realistically, any decent 9x19mm load would likely blow the gun apart. Despite its 8-round magazine, and original anemic 8mm Nambu load, it's the strongest Handgun in the game and its also the only "Handgun" that has any recoil. This also marks the first time in Resident Evil history that a firearm was misrepresented as being a different caliber than it is - a trend that continued in Resident Evil 4 and 5.

The gun is also found in the hands of Andy, the sewer janitor, when he is confronted near the end of the game, and when he unsuccessfully tries to assassinate Ark if he goes into the arcade. 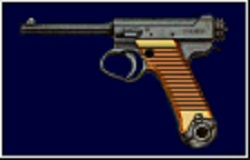 A Smith & Wesson Model 19 with 4" barrel (referred to as Magnum) can be found late near the elevator descending into the Dead Factory, firing .357 Magnum rounds with a 6-round cylinder. As expected, head-poppingly powerful, exceedingly rare ammo, though the reload speed is decent enough. It's noteworthy to mention that the firing sound makes it sound like Ark is manually cocking the hammer with each shot, and he reloads rounds individually, not with a speedloader, which is strange since the model for magnum ammo has the ammo in a speedloader. 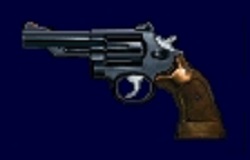 A Smith & Wesson Model 19 with a 6" barrel (referred to as Magnum Custom) was removed from the game. The original descriptions of the guns suggest that Ark would have been restricted to firing .38 Special ammunition from the 4" M-19, until/unless he found the longer barrel (and custom grips) represented here. 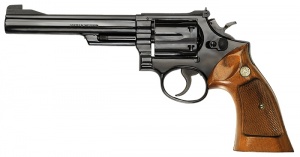 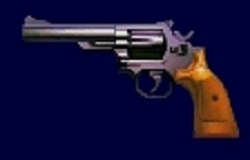 Anything not a Handgun. All very destructive in their own way, with the Shotgun being handiest when Magnum ammo is in low supply. The Grenade Gun's fictional Flame rounds do excellent service against the Ivy monsters.

The Franchi SPAS-12 (referred to as Shotgun) can be found in the Prison Showers. The SPAS-12 is, as expected, is only fired in pump-action, but the pump action is very fast. Uses 12 gauge shot shells, of which it can hold 8. The weapon reloads an astounding four shells at a time. 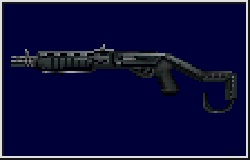 The M79 grenade launcher (referred to as Grenade Gun) can be found in the Headquarters Garage, the M79 fires Burst (five submunitions that cover a star pattern, and explode), Acid, and Flame (napalm-like) rounds. One shell at a time, but the reload is very quick. 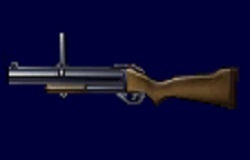 The M20A1 "Super Bazooka" (referred to as Rocket Launcher) can be unlocked by acquiring all the guns in the game (which means three playthroughs). It has an unlimited supply of 3.5" Bazooka shells, and, as expected, is safe enough to fire two inches away from one's face and still kill whatever it hits in one shot. 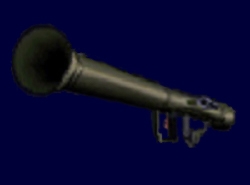 Members of the Umbrella Undertaker B.O.W. unit deployed to Sheena island are armed with what appear to be low-res Heckler & Koch MP5Ks with low-profile sights (that or the designers didn't bother to model it in altogether likely do to the PS1's graphical constraints). They also have laser sights attached to them, which allows them to snipe at targets from a distance in certain areas, although the attachment itself isn't modeled on the weapon. The gun is not available for player use. 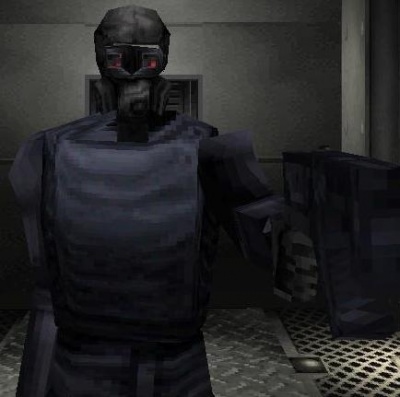