Resident Evil: Welcome to Raccoon City is the 2021 feature film reboot of the Resident Evil film franchise. As with the the original video game, the film is set in the year 1998, and explores the events occurring inside the Spencer Mansion and the fall of Raccoon City. The film, which was written and directed by Johannes Roberts, was released in November of 2021.

The following weapons were used in the film Resident Evil: Welcome to Raccoon City:

Multiple characters use Beretta 92FS pistols throughout the film, including Claire Redfield (Kaya Scodelario), Chris Redfield (Robbie Amell), Jill Valentine (Hannah John-Kamen), Kevin Dooley (Dylan Taylor), and Albert Wesker (Tom Hopper). Wesker's pistol is a two-tone version with an accessory rail, similar to the one used by his character in the games. 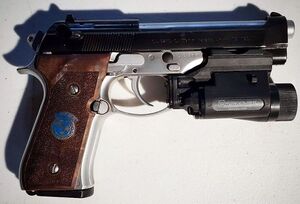 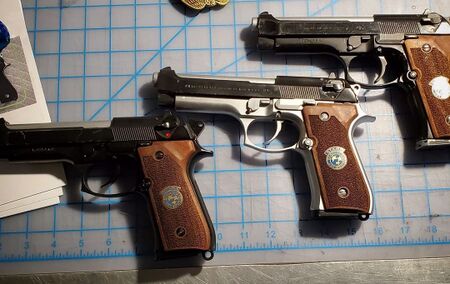 Beretta 92FS pistols used in the film - 9x19mm. A combination of real and replicas were used with custom-made grips for the S.T.A.R.S. members. Image courtesy of Movie Armaments Group.

Leon S. Kennedy (Avan Jogia) uses a nickel-plated Colt M1911A1 throughout the film. When faced with a zombie in the police station's holding cells, he fires 10 rounds from a single magazine.

Dr. William Birkin (Neal McDonough) makes use of a Glock 19 when confronted by Wesker in NEST.

The Glock 19 pistol is seen to the left of the case.

In the diner, after being challenged to shoot a ketchup bottle off a sleeping Leon's head, Jill humorously raises her Beretta to do so before a horrified Wesker stops her and hands her a toy dart gun in the shape of a Luger P08.

Jill looks at the toy Luger being offered.

Chief Irons (Donal Logue) uses a S&W Model 29 to fend off a zombie dog and put down a flaming zombie.

Richard Aiken (Chad Rook) uses a Mossberg 590 as his primary weapon inside the Spencer Mansion.

Leon pulls an Remington 870 from the RPD's armory, before having it taken off him by the more experienced Claire.

Chris Redfield and Albert Wesker both carry MP5A3s with Surefire foregrips when investigating the Spencer Mansion.

Jill uses a Heckler & Koch MP5K-PDW. Both this and the other MP5s gain enlarged flash-hiders when the guns are required to cycle instead of having CGI muzzle-flashes added. In other scenes it has the same short barrel as the MP5K.

Umbrella Security Services securing a cordon use what appear to be HK33s, but they are out of focus and obscured by teargas.

Leon finds an M136 AT4 and uses it to deliver the traditional coup de grâce against the final boss.