Rebellion (French title: L'ordre et la morale) is a 2011 French drama film directed by and starring Mathieu Kassovitz. Based on the events surrounding the Ouvéa cave hostage taking that occurred in April and May of 1988, Kassovitz plays a GIGN officer who attempts to seek a peaceful solution to the crisis while contending with pressure from the military and the government for a forceful resolution.

The following weapons are featured in the 2011 film Rebellion:

The Manurhin MR-73 revolver is the standard sidearm of Groupe d'Intervention de la Gendarmerie Nationale (GIGN) operatives, including Captain Philippe Legorjus (Mathieu Kassovitz) . Legorjus uses it at several points in the film, most prominently during the finale. Note that the MR-73 Sport used on screen isn't accurate to the reality, GIGN members used MR-73 Gendarmerie (with different sights). 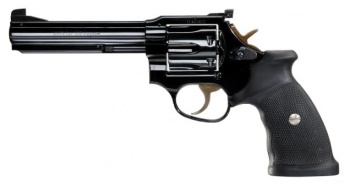 Captain Legorjus crawls through the jungle with a MR-73. 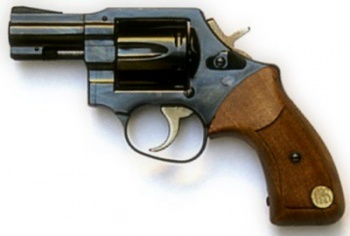 Unknown revolvers are taped to Jean Bianconi's (Alexandre Steiger) underpants. The medals on the grip aren't the same as the MR-73, these are certainly S&W revolvers (as the ones used during the operation)

One of the Kanaka separatists appears to have a Mle 1892 Revolver in a shoulder holster.

A French paratrooper threatens an elderly man with a MAS / MAC mle. 1950 pistol before he is stopped by Legorjus and Colonel Benson.

A paratrooper threatens the old man with a MAC Mle 1950.

A separatist uses an anachronistic MAS-G1 to threaten Legorjus, which became the standard issue in the Gendarmerie 4 years later and is not likely to be in the hands of the separatists. 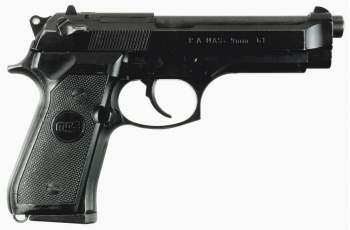 A hostage is dragged through the jungle by a MAT-49 wielding separatist.

A separatist fires a MAT-49 during the finale.

GIGN officers use the Heckler & Koch MP5A3 at various points in the film.

A GIGN officer aims a MP5A3 while searching the jungle.

A gendarme aims a MP5 while smoke grenades are being tossed from a helicopter.

Most of the Kanak separatists use 12 Gauge Double Barreled Shotguns when they attack a Gendarmerie camp that allows them to acquire better weapons.

A separatist threatens the captured gendarme.

A shotgun lies next to a dead separatist.

The Winchester Model 1300, known as the FN Model 1300 in Gendarmerie service, is used by several of the GIGN operatives while searching for the hostages and separatists. Legorjus uses one in the finale before discarding it in favor of his MR-73.

The GIGN team poses for a photo before Operation Victor (May 5, 1988).

Legorjus and another officer fire their Model 1300 shotguns.

The GIGN officer unloads his shotgun before switching to his MR-73 revolver.

Vince, one of the separatists, uses a scoped Winchester Model 70 throughout the film.

Vince fires the rifle at a fleeing gendarme.

Vince holds the rifle as the separatists storm the gendarmerie camp.

A separatist holds the rifle after Legorjus voluntarily offers himself as a hostage.

A few of the separatists use MAS-36 rifles.

A MAS-36 is pointed at Legorjus when he offers to be a hostage.

A separatist holds a MAS-36 while his leader Alphonse (Iabe Lapacas) questions Legorjus and other GIGN officers who offer to become hostages.

Some of the GIGN officers use SIG SG 543 carbines.

A GIGN officer in the background holds a SG 543.

A GIGN officer searches the jungle with a SG 543.

The FAMAS F1 is the most common weapon in the movie, and is used by virtually all of the French Army units, including the 11th Shock Parachutist Regiment (11e choc) and the Commando Hubert unit. The separatists also use a number of captured FAMAS rifles, using them to threaten the hostages and fire at attacking French security forces.

A gendarme holds a FAMAS F1.

A commando retrieves a FAMAS F1 after the rescue operation.

A paratrooper can be seen manning a Browning M2HB while guarding the main French base in Ouvea.

A paratrooper mans a Browning M2HB in the foreground.
Retrieved from "https://www.imfdb.org/index.php?title=Rebellion_(2011)&oldid=1414931"
Categories: