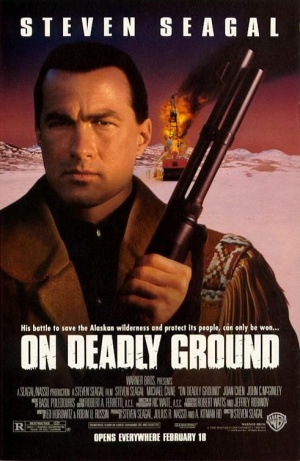 On Deadly Ground is a 1994 action film starring Steven Seagal as Forrest Taft, a former CIA operative turned oil firefighter who finds himself battling an oil company intent on driving out an Alaskan tribe from their land in order to get the oil rights. The film, whose cast included Michael Caine and R. Lee Ermey, marked the directorial debut of Seagal, who decided to add a little more of an ecological message to the feature in the midst of all the action.

The following weapons were used in the film On Deadly Ground:

As in the majority of his movies, Forrest Taft (Steven Seagal) is seen wielding an Colt MK IV Series 70 Government model handgun in the film. In one instance, Taft creates a makeshift suppressor out of a plastic soda bottle.

Taft sneaks into the facility with his Colt in hand.

Taft makes a silencer out of a plastic bottle with rubber bottom and tapes it to the pistol.

"I got something!"
Taft lies in wait with the Series 70.

The Glock 19 is carried by MacGruder (John C. McGinley) as his main sidearm.

Otto (Sven-Ole Thorsen) with a Glock

Stone (R. Lee Ermey) is seen carrying a Benelli M3 Super 90 when he confronts Taft at the oil platform.

Forrest Taft (Steven Seagal) uses the USAS-12 Shotgun in the battle on the oil platform.

Taft is seen using a 12 Gauge Double Barreled Shotgun he kept in his gun case to take out some of MacGruder's men.

Taft is seen taking an M14 Rifle from the hidden armory. Masu (Joan Chen) is seen carrying the M14 as she and Taft infiltrate the Aegis facility.

The M14 is seen among the weapons in the hidden armory.

Masu (Joan Chen) carries the M14 as she and Taft infiltrate the Aegis facility.

Another one of MacGruder's men carries a Ruger AC556 in a Muzzelite MZ14 Bullpup stock.

Homer Carlton (Billy Bob Thornton) is seen with a Carl Gustaf M/45 as his main weapon.

Homer Carlton (Billy Bob Thornton) contemplates whether he should have the stock in or out on his Gustaf M/45.

Homer prepares to fire his Gustaf.

Some of MacGruder's men who come to take out Forrest at his cabin are armed with Heckler & Koch MP5K's. Forrest uses one during the shootout, but it jams on him.

Forrest opens fire with a commandeered MP5K that has the mags taped "jungle" style.

Some of MacGruder's men who guard the Aegis platform are armed with Heckler & Koch MP5A3s.

The henchman next to Homer prepares to fire his MP5.

Taft uses C4 blocks to create an explosion powerful enough to take down the mercenaries' helicopter at the mountain weapon stash.

There appears to be a couple of AK variants, a Beretta 92FS, a Beretta 93R, and a couple of Olympic Arms OA-93s on the wall to Taft's left.
Retrieved from "https://www.imfdb.org/index.php?title=On_Deadly_Ground&oldid=1296010"
Categories: