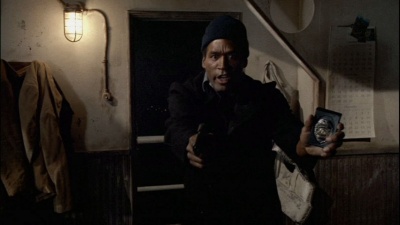 O.J. Simpson as Det. Nordberg in The Naked Gun: From the Files of Police Squad! with a M1911A1.

Orenthal James "O.J." Simpson is a former Heisman trophy winner and a member of the College Football Hall of Fame and the Pro Football Hall of Fame. After retiring from professional football ranked second in career rushing yards (second only to fellow football player-actor Jim Brown), he went to become an actor, broadcaster, and pitchman, appearing in such films as The Naked Gun film trilogy, The Towering Inferno, and Capricorn One as well as appearing in numerous commercials for Hertz Rent-A-Car. His acting, broadcasting, and advertising careers ended when he was charged with the murder of his ex-wife Nicole Brown Simpson and her friend Ronald Goldman in 1994. The bizarre turn of events revolving around the crime and the subsequent trial was seen on national television and was dramatized in 2016 in the FX miniseries drama The People v. O.J. Simpson: American Crime Story. Although acquitted of two counts of murder, Simpson later was found liable for the deaths of the two victims in the ensuing civil suit. He served nine years of a possible thirty-three year sentence for his role in an unrelated robbery before being paroled in October of 2017.