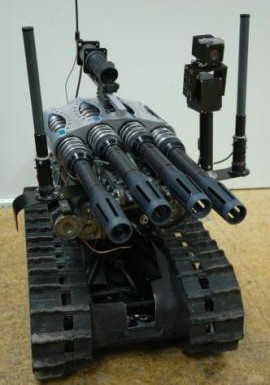 Metal Storm Weapons are a series of proposed (and prototype) weapons created by the Australian company Metal Storm Ltd. These weapons use superposed loads in a single barrel with electrochemical ignition, allowing for enormously high fire rates due to a lack of moving parts. While quoting a cyclic fire rate of any kind is slightly misleading (since these weapons have no action and therefore no cycle of function) their headline proof-of-concept demonstrator, a 36-barrel rig called "Bertha," fired 180 shots at a total fire rate of one million rounds per minute (ie, 5 shots from each barrel at ~27,777 RPM), making it the fastest-firing gun in existence. This rig had notable pressure problems due to firing while the preceding bullet was still inside the barrel, and was not a practical weapon system. The Metal Storm VLE pistol appears to have also essentially been a proof of concept demonstrator to show how much the technology could be miniaturised. (Interestingly, Season 6 of CSI: Miami depicted an exaggerated 229-barreled version of the "Bertha" rig under the fictional name "DX4 Vaporizer"; the prop from the show is also frequently confused with the real deal on the internet.)

The technology's main shortcomings are reloading and varying ballistics; firstly, all but one of the Metal Storm weapons (the 3GL) required an entire pre-loaded barrel or barrel section to be replaced each time they were empty. Secondly, since the loads are stacked in the barrel, each successive projectile travels down a longer barrel and therefore has slightly different ballistics. This largely limited practical applications of the technology to mortars and repeating area-suppression grenade launchers where varying accuracy is not a major concern. The fact that batteries and electronics are innately less reliable and durable than a mechanical firing pin was also a factor, as by their nature all Metal Storm devices use electrical ignition. Additionally, since every shot requires the barrel to be longer, Metal Storm weapons inherently have lower ammunition capacities than a magazine or cylinder fed gun of the same length: as a casual example, even if it is assumed that a Metal Storm equivalent of a 5.56mm round would only be the size of a caseless round for the Heckler & Koch G11, the equivalent of a 30-round STANAG magazine would be a barrel section 39 inches long.

The technology does not seem to have been particularly successful; while Metal Storm produced a range of concepts and demonstrators, their largest contract appears to have been supplying 500 MAULs and 5,000 less-lethal barrels to Papua New Guinea for law enforcement use (it is not clear if these were delivered), and the company's shares were suspended in July 2012 and Metal Storm Ltd placed into voluntary administration. Their US-based subsidiary Metal Storm Inc filed for Chapter 7 bankruptcy in October 2014. Metal Storm's patents, intellectual property, trademarks and existing weapon prototypes were acquired in August 2015 by Australian defence R&D company DefendTex, which has stated it intends to market them under its existing brand.

Weapons using Metal Storm technology have been featured in the following video games and television series:

AICW was the Australian equivalent of the XM29 OICW program, pairing a 5.56mm KE module produced by Steyr and based on the Steyr AUG rifle series (specifically the Australian F88 Austeyr version) with a 3-round 40mm grenade launcher produced by Metal Storm. Though testing was successful, the project did not proceed further (most likely because at 22 pounds the loaded AICW was even heavier than the XM29), though Metal Storm did attempt to market a variant of the grenade launcher as the 3GL.

Render of Metal Storm AICW with 40mm grenade launcher. This appears to use the same action as the later 3GL, with grenades loading into the breech at the rear of the weapon and locking into each other to form the 3-round stack: the grey grenade round is shown as solid, while a second in front of it is shown sectioned in half to show how one round fits into the base of another.

The Metal Storm VLE or O'Dwyer VLE pistol was a proof-of-concept demonstrator showing the degree to which the technology could be miniaturised; several variants were produced, using either rear-inserted barrels or break-open frames, with the most common a render produced for the TV series Future Weapons showing a four-barrel version with two 9mm lethal barrels and two 15mm less-lethal barrels. 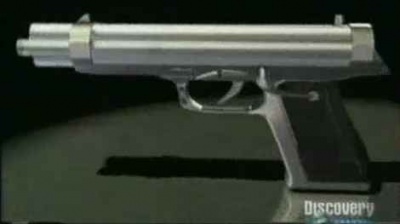 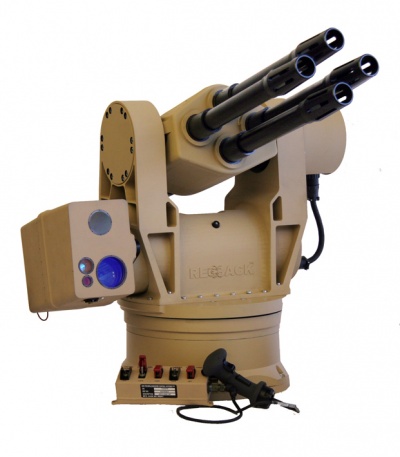 Redback was one of a series of 40mm implementations of Metal Storm technology in grenade launchers and mortars, where the variable per-shot accuracy would be less of a problem. The Redback system was a four-barrel remote weapon station derived from the Metal Storm ADWS (Area Denial Weapon System): while that system was supposed to serve as an area saturation weapon that could be concealed and triggered as an alternative to permanent minefields, Redback was designed to replace the Mk 19 grenade launcher on vehicles and drones as a combination of offensive weapon system and counter-RPG system. Early variants were supposed to use airbursting grenade projectiles developed by ST Kinetics, with each barrel holding four shots, while the later "Firestorm" version never mentioned this and appears to have just been a pure offensive weapon system.

A larger variant called "Firestorm Fury" with a capacity to mount between four and thirty barrels, each containing six grenades, was submitted to the US Marine Corps as part of the Marines Mission Payload Module-Non Lethal Weapon System (MPM-NLWS) program. This was intended to create a crowd-control launcher which could fire CS gas, sting balls or a "wall of flashbangs" and be mounted on a variety of platforms including the Marine Corps Transparent Armored Gun Shield (MCTAGS) for the Humvee. It appears the MPM-NLWS contract was ultimately awarded to General Dynamics instead.

MAUL (Multi-shot Accessory Underbarrel Launcher) is a Metal Storm-based semi-automatic accessory shotgun designed to compete with pump or bolt action accessory shotguns such as the Knight's Armament Masterkey and M26 MASS. It uses a front-loading 5-shot preloaded barrel, and can fire either standard slug or shot or less-lethal loads, though only one type of load can be used at a time due to the nature of the weapon. 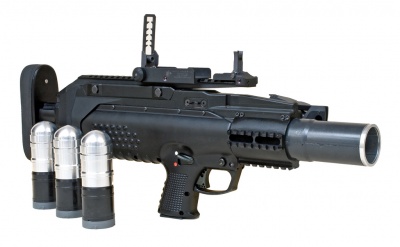 Metal Storm 3GL 3-shot grenade launcher in standalone configuration - 40mm. This bullpup configuration was developed around 2009 over concerns the earlier version shown below was too long, and would prevent parent rifles with magazines that rock into place from being loaded while the device was mounted.

The 3GL is a 3-shot semi-automatic grenade launcher spun off from the Australian AICW program. It appears that it was supposed to be breech-loaded like a regular UBGL, but used proprietary grenade rounds that were designed so the heads of the second and third loaded rounds would slot into the base of the one in front of them, thus creating the stacked rounds without using a preloaded barrel: they appear to have used a similar pseudo-caseless system to VOG grenades so as to not have to deal with ejecting spent casings. Instead of using a direct electrical connection to trigger the propellants like other Metal Storm weapons, induction coils around the barrel were used to ignite the rounds. Unfortunately this concept was unsuited to use on carbines: the bulky device would seriously unbalance anything smaller than a full-sized rifle when loaded. Even at its goal weight of 5 pounds loaded, it would be two-thirds the weight of a loaded M4 carbine.