Mackenna's Gold is a 1969 Western movie directed by J. Lee Thompson and adapted from the 1963 novel by Heck Allen. The film stars Gregory Peck as Marshal MacKenna, Omar Sharif as Mexican outlaw John Colorado and Telly Savalas as US Cavalry Sergeant Tibbs. The plot revolves around the gold, hidden in on Apaches territory. MacKenna takes a treasure map from dying shaman Prairie Dog (Eduardo Ciannelli) who was already stalked by Colorado's gang. As events unfold, more and more people become involved in the treasure hunt, including Inga Bergmann (Camilla Sparv), kidnapped by Colorado, and treacherous Sgt. Tibbs.

The following weapons were used in the film Mackenna's Gold:

McKenna holds a "Civilian" Single Action Army during the encounter with Prairie Dog. In this scene his revolver switches to an "Artillery" model (see below) and then back to a "Civilian".

Another view of McKenna's revolver.

Avila aims his revolver at McKenna.

Sanchez holds his revolver at McKenna's back (at the right). The pearl grip of Colorado's revolver can be seen in center.

Colorado with McKenna's own revolver.

Colorado holds his revolvers during the encounter with Ben Baker and his men. Pearl grips are seen.

Colorado with a revolver in hand.

A good view of the pearl grip of Colorado's revolver in holster.

During the encouter with Prairie Dog, MacKenna's revolver switches from "Civilian" to "Artillery" model due to a continuity error. "Artillery" model revolvers are also seen in hands of two men of Ben Baker's motley crew.

Another view of his revolver.

Tibbs holds his revolver when he takes Inga Bergemann as hostage.

Tibbs fires from the ferry at Apaches on the shore.

Colorado with a Single Action Army and Tibbs with a fake Remington fire at Apache scout.

Another view of Tibbs' revolver in same scene.

Besh (at the left) and Monkey (at the right) hold Winchester 1892 rifles in the scene in Judge Bergeman's house.

Besh with Winchester 1892 rifle. Note that cartridges in his bandolier doesn't fit for the Winchester rifle due to spitzer bullets.

A good view of a Winchester in hands of Colorado.

Colorado shoot horses of two of Baker's men who are chased by Apaches.

Hesh-Ke fires from the ferry at Apaches.

Colorado's rifle is seen on the ground during the rest.

The Preacher (Raymond Massey) with a carbine.

Adams' Boy (David Garfield) with a carbine. The Preacher's carbine is also seen at far left.

Hachita (Ted Cassidy) with Winchester Model 1892 carbine. Before and after this moment, Hachita is armed with a fake Henry rifle (see below), but in this scene his gun swithces to a carbine due to a continuity error.

An Apache aims his Winchester 1892 carbine at The Storekeeper (Burgess Meredith). 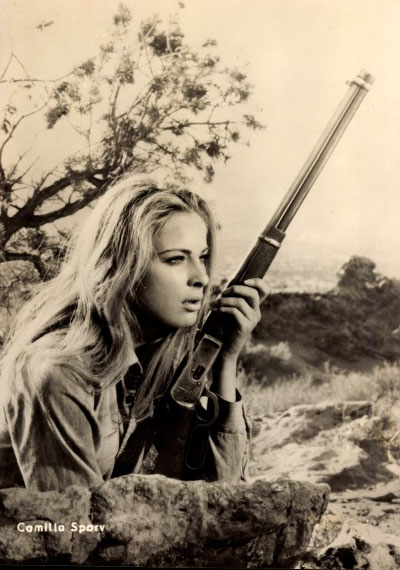 Inga Bergemann (Camilla Sparv) holds a Winchester Model 1892 carbine on a promotional image (although she doesn't use any gun in the movie).

Henry 1860 rifles, seen in the movie, actually are visually modified Winchester Model 1892, with removed handguards. Such rifle is seen in Judge Bergerman's (Trevor Bardette) house, and later it is used by Hachita (Ted Cassidy) who personally killed the Judge. Sergeant Tibbs (Telly Savalas) and his cavalrymen also use such rifles.

Judge Bergerman tries to take the rifle from the wall...

...but he is killed by Hachita's tomahawk.

Hachita with a fake Henry rifle.

US Cavalrymen fire their rifles.

Hachita fires from the ferry.

Shaman Prairie Dog (Eduardo Ciannelli) and some US cavalrymen are armed with Springfield Model 1873 Cavalry Carbines.

Prairie Dog with his rifle.

Springfield carbines are seen in the camp of cavalry unit.

A cavalryman in ambush. 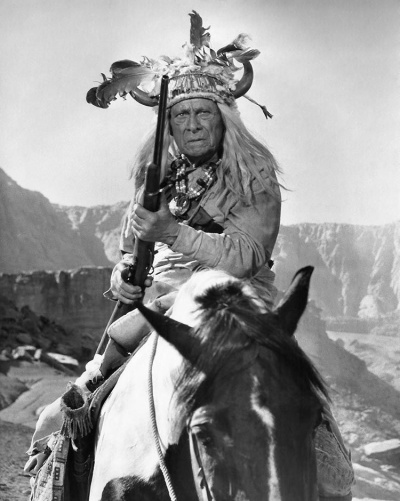 Prairie Dog holds his rifle on a promotional image.
Retrieved from "https://www.imfdb.org/index.php?title=Mackenna%27s_Gold&oldid=1328503"
Categories: