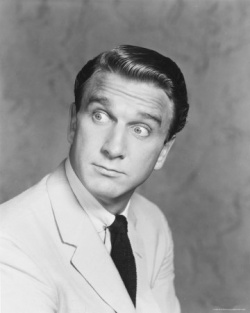 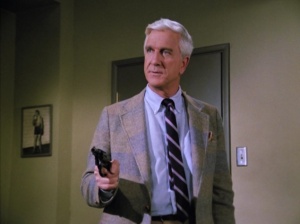 Leslie Nielsen as Det. Frank Drebin in the 2nd episode of Police Squad! with a Colt Detective Special.

Leslie Nielsen (1926-2010) was a Canadian-American actor who came to be best known for his comedic roles, namely as the bumbling Lt. Frank Drebin in The Naked Gun film series, which had been adapted from the television show Police Squad! in addition to his role as Dr. Rumack in the 1980 feature film Airplane!. Prior to Airplane!, Nielsen had been primarily known as a dramatic actor, appearing in such films as Forbidden Planet, The Poseidon Adventure, and Creepshow. He passed away in 2010 at the age of 84.