Counterpoint is a 1968 drama starring Charlton Heston, directed by Ralph Nelson (The Wilby Conspiracy). Lionel Evans (Heston) is a conductor whose orchestra is captured by the Nazis during a counterattack in Belgium following the Ardennes offensive. Brigadier General Schiller (Maximilian Schell) is a big fan of Evans' work and attempts to force him to perform a special concert just for him or risk execution. Evans grapples with whether to give in to Schiller or not.

As in most World War II films, the MP40 is the most commonly seen firearm in the hands of the German forces. During the finale, Evans, Victor Rice (Leslie Nielsen) as well as Schiller's second in command Colonel Arndt (Anton Diffring) wield MP40s. The one used by Evans has two magazines taped together "jungle" style.

Arndt's men with their MP40s in the castle courtyard.

Evans (Charlton Heston) firing an MP40 with dual magazines during the climax.

Evans yells for Rice to get everyone to safety.

Evans resumes firing at the Nazis.

Colonel Arndt (Anton Diffring) carries a Luger P08 as his sidearm. Schiller himself also briefly uses one during the climax to kill Arndt in order to save Evans.

Arndt fires his Luger in the air to make the arguing musicians shut up. 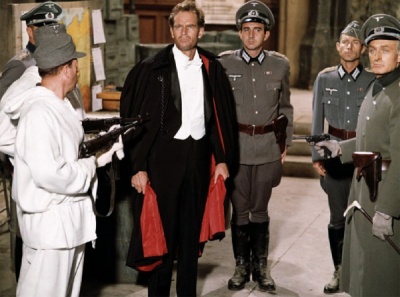 Arndt holds his Luger on Lionel Evans (Charlton Heston) in a publicity still.

A Karabiner 98k is seen at the background center.
Retrieved from "https://www.imfdb.org/index.php?title=Counterpoint&oldid=1442371"
Categories: