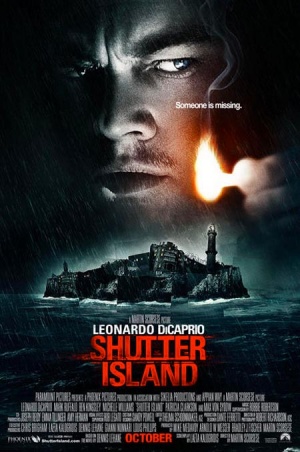 Shutter Island is the 2010 feature film adaptation of the novel of the same name written by Dennis Lehane (Mystic River). Directed by Martin Scorsese, the film stars Leonardo DiCaprio and Mark Ruffalo as Deputy US Marshals who are sent to a psychiatric hospital housed on a small island to investigate the disappearance of a patient.

The following weapons were used in the film Shutter Island:

Deputy U.S. Marshal Teddy Daniels (Leonardo DiCaprio) carries a Smith & Wesson Model 10 revolver with a 4 inch barrel as his sidearm. In the book and movie it has a dent in the barrel where a suspect shot at him. In reality, Teddy's revolver is a toy gun given by the staff of the psychiatric hospital, and breaks easily during the climax of the movie. 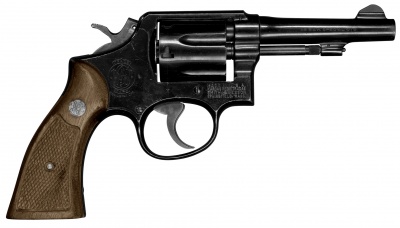 Smith & Wesson Model 10 - .38 Special. This is the screen-used firearm carried by Leonardo DiCaprio in the film Shutter Island. Thanks to James Georgopoulos.

Teddy Daniels with his revolver after picking it up from a table.

A close up of the revolver in its holster on Dr. Cawley's (Ben Kingsley) desk, showing the grips on the revolver.

Deputy U.S. Marshal Chuck Aule (Mark Ruffalo) carries a Colt Detective Special as his sidearm. It can be identified by the grips when he hands the gun to the guard.

Chuck Aule hands over his revolver to the guards of Shutter Island.

The Nazi commandant uses a nickel plated Walther PP to commit suicide in the concentration camp flashback; Teddy Daniels (Leonardo DiCaprio) moves it away from the commandant to prolong his death. The filmmakers selected the nickel plated model due to the way it contrasted with the wood floor of the office despite being historically inaccurate that back during WWII nickel plated Walthers did not exist yet.

The nickel Walther PP lies next to the wounded Nazi commandant.

Note the SS logo on the grips of the Walther.

The Nazi commandant attempts to reach for his Walther.

Teddy Daniels moves the nickel Walther PP away from the commandant.

Many of the Shutter Island prison guards are armed with M1903 Springfield rifles. Teddy Daniels also is seen with one near the end of the film.

Teddy Daniels aims the rifle at a disarmed Shutter Island guard before knocking him out.

Teddy Daniels searches the lighthouse with his M1903 Springfield.

Teddy Daniels with the M1903 Springfield before breaching a room.

Some of the U.S. Army troops entering the concentration camp in the flashbacks are armed with M1 Carbines.

In the flashbacks to Dachau concentration camp, Teddy Daniels (Leonardo DiCaprio) and some U.S. soldiers are armed with M1 Garand rifles.

U.S. soldiers with slung M1 Garands search through the Kommandant's office at the Dachau concentration camp in a flashback.

Teddy Daniels (Leonardo DiCaprio) with a slung M1 Garand in a flashback.

While armed with their M1 Garands, Teddy Daniels and other U.S. soldiers walk past the frozen remains of the Dachau prisoners.

Teddy Daniels and the other soldiers execute the Dachau guards with M1 Garands after one of the Germans attempts to escape.

Teddy Daniels proceeds to lower his M1 Garand after all of the Dachau prison guards are shot.

Teddy Daniels with an M1 Garand.

The Shutter Island guard at the entrance to Ward C carries a Winchester Model 1894.

The Shutter Island guard on the left with his Winchester Model 1894.

Several guards at Shutter Island are briefly seen with a Winchester Model 1897.

The Shutter Island guard to the left with his Winchester Model 1897 as he watches over the working orderlies.

The Shutter Island guard to the left watches over the orderlies while armed with a Winchester Model 1897.