The Kid is a 2019 Western movie directed by Vincent D'Onofrio and starring Dane DeHaan as Billy "The Kid" Bonney and Ethan Hawke as Sheriff Pat Garrett.

The following weapons were used in the film The Kid:

Jim East aims his revolver at manacled Billy "The Kid".

Another view of Jim East's revolver.

Pat Garrett holds his revolver during the confrontation with Sheriff Romero's men in Santa Fe.

Billy holds "Cavalry" and "Artillery" revolvers that he took from the drawer in Sheriff Garrett's office.

Pat Garrett holds two revolvers during the shootout in the brothel.

Pat Garrett holds his revolvers during the showdown with Grant Cutler. 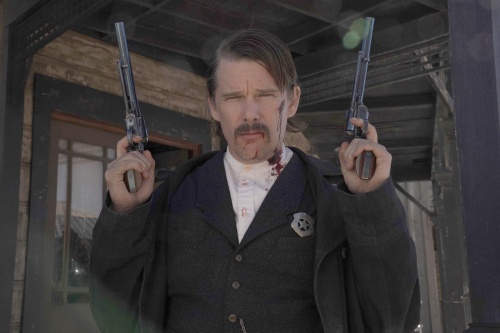 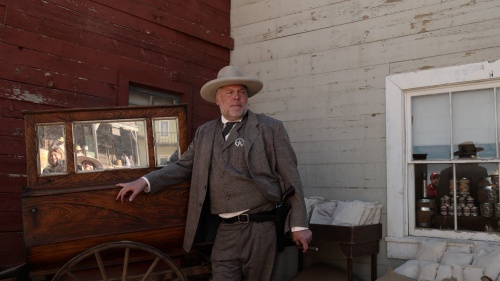 Sheriff Romero (Vincent D'Onofrio) on a production still. His revolver is seen only in holster but due to the size of the holster, the revolver seems to be a "Cavalry" model. Also note the brass trigger guard, same as on Jim East's revolver.

One of the revolvers that Billy "The Kid" (Dane DeHaan) takes from Sheriff Garrett's office during the prison break is a Single Action Army "Artillery" model. "Artillery" revolvers are also seen in hands of outlaw Dave Rudabaugh (Chad Daschnaw), and several of Grant Cutler's henchmen, notably Oran Moler (Hawk D'Onofrio).

Dave Rudabaugh fires his "Artillery" revolver during the shootout with Sheriff Garrett's men.

Another view of Dave's revolver.

Billy "The Kid" takes "Artillery" (at the left) and "Cavalry" revolvers from the drawer.

"Artillery" revolver is seen from another side.

An unnamed Grant Cutler's henchman holds an "Artillery" revolver during the shootout in the brothel.

He fires in air. The muzzle flash seems to be a CGI effect.

Another view of Rio's revolver. 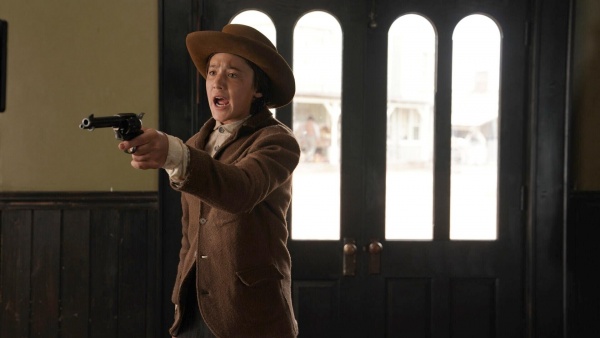 Rio Cutler holds his revolver on a promotional image.

In various scenes Colt Model 1877 Lightning revolvers with 3 1/2" barrel are seen in hands of Billy "The Kid" (Dane DeHaan), Rio Cutler (Jake Schur), and his sister Sara (Leila George). This screen gun (possibly a single prop reused) is supposed to be a Cimarron replica, identified by a visible logo on the grip. 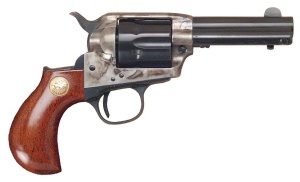 Billy holds his revolver during the shootout with Sheriff Garrett's men.

Another view of Billy's revolver.

Rio's revolver in hands of Sara.

Rio holds his revolver in the final scene.

Another view of Rio's revolver in the final scene. 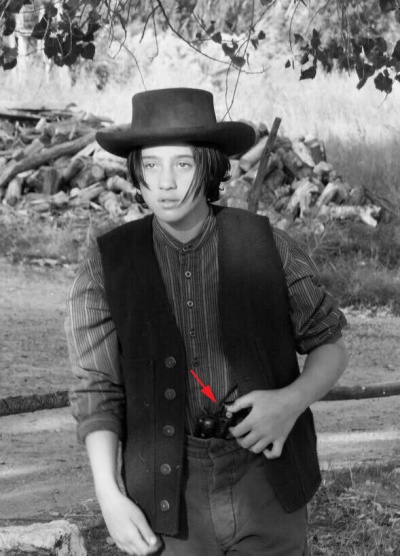 A promotional image of Rio Cutler (Jake Schur) carrying his revolver tucked into his belt. The logo can be seen on the grip. 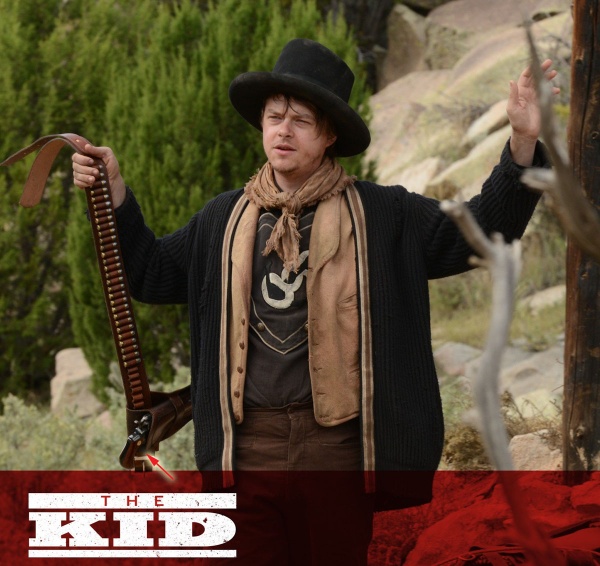 A promotional image of Billy "The Kid" (Dane DeHaan) surrendering his gun. The logo can be seen on the grip.

The revolver is seen during the opening credits, although partially, but still good enough for identification.

Rio aims the revolver at his cruel father.

A Colt Walker is used by Rio's uncle Grant Cutler (Chris Pratt). The screen revolver is a modern cartridge replica.

One of the original cartridge conversion Colt Walker 1847s - .44 caliber used by Clint Eastwood in The Outlaw Josey Wales.

Grant Cutler holds his revolver at Rio's head. It can be seen that the revolver is a cartridge version, and most likely a modern replica.

A close-up of the cylinder and the frame.

Brass parts of the frame can be seen. 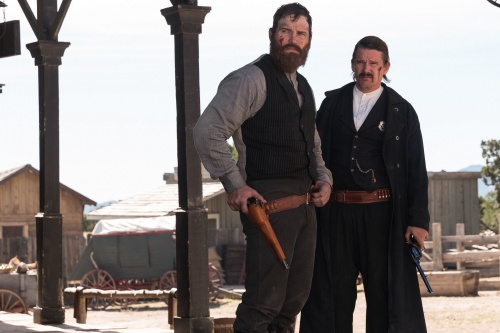 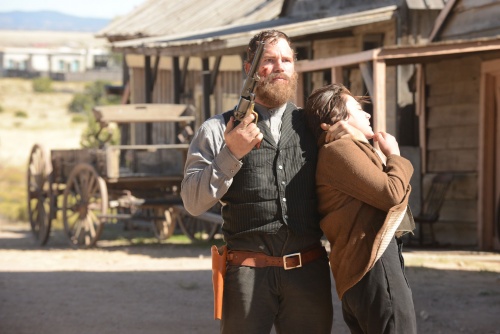 Bob Olinger holds his revolver during Billy's prison break. The gun is seen blurry but still can be identified as a Smith & Wesson top-break revolver. 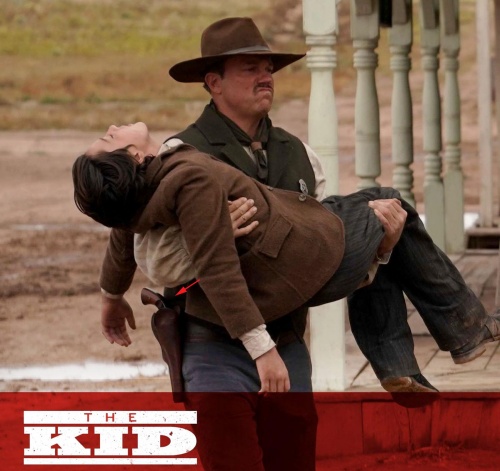 A promotional image allows one to see the grip of Olinger's holstered revolver. Its shape matches Schofield model. 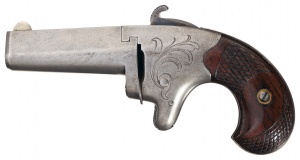 Throughout the movie Sheriff Pat Garrett (Ethan Hawke) carries Henry 1860 rifle with iron frame, definitly a modern replica as only 400 Henry rifles were produced with the iron frame. A common brass framed Henry is seen in hands of outlaw Billy Wilson (Charlie Chappell).

Wilson fires his Henry rifle during the shootout with Garrett's men. This is a common brass framed gun.

Garrett fires his Henry rifle in the same scene. Although the receiver looks slightly yellowish, this is only an optical effect, as stains on the frame prove that it is iron. The surface of the receiver of this rifle can be seen more close on one of the following screenshots.

A close-up of the rifle. 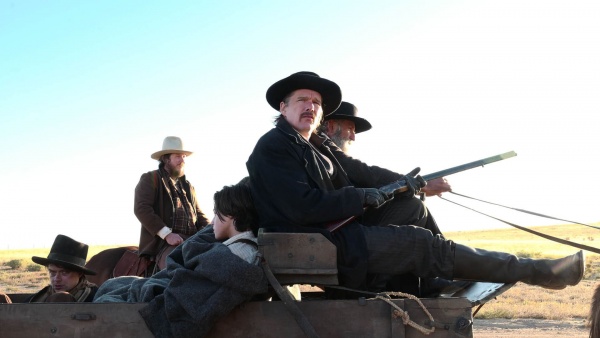 Pat Garrett holds a Henry rifle on a promotional image.

Bowdre's "Yellow Boy" rifle is seen at the far right.

A close-up of Bowdre's rifle.

A deputy fires his Winchester 1866.

Same character is seen at the background center. Due to a continuity error, his 1866 carbine (see below) switches to a rifle.

Pat Garrett holds a Winchester 1866 rifle instead of his common Henry rifle.

Romero's deputy (at the left) holds a Winchester 1866 rifle. 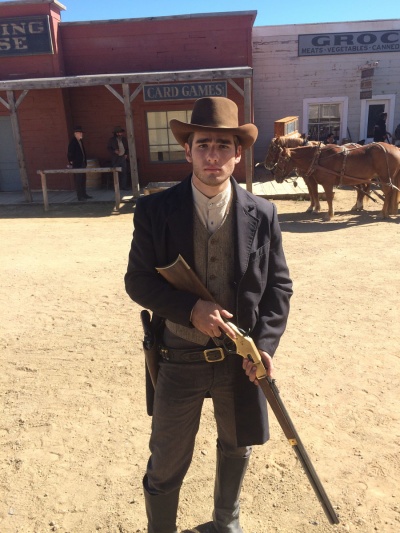 A deputy with a "Yellow Boy" carbine in shootout.

Same character is seen in center. Another deputy (at the left) is also armed with a 1866 carbine that later switches to a rifle (see above).

After the shootout, Bowdre's rifle switches to a carbine that is seen leaning against the wall.

Another view of the same carbine at the wall.

A Coach Gun and a Winchester 1866 carbine are seen on the wall in Sheriff Garrett's office.

A better view of Billy's carbine.

Sheriff Garrett's deputy at the foreground fires his carbine. The moving hammer is seen.

Dave reloads his carbine during the shootout.

Another view of Dave's carbine.

One of Sheriff Romero's deputies (at the right) holds a Winchester 1873 carbine.

Another deputy (in center) holds a Winchester 1873 carbine.

East holds his rifle during the arrest of Billy.

Olinger aims his rifle at Rio Cutler. His gun is seen better on a production still.

A close-up of East's rifle during the shootout in the brothel.

A general view of East's rifle in the same scene. 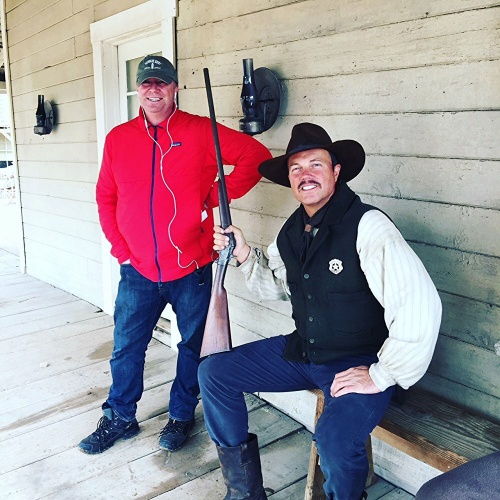 One of Sheriff Romero's deputies holds a muzzleloading long gun that is supposed to be a Springfield rifled musket, likely Model 1861 or 1863.

The gun is seen partially. It has three barrel bands.

The barrel with the ramrod is seen.

The man with his gun is seen at the background center.

The musket is seen in center.

Tom Pickett holds his shotgun (at the left).

Another view of Pickett's shotgun. It can be identified as Colt 1878.

Billy gets two revolvers and a shotgun during the prison break.

Two more Coach Guns that are seen in various scenes differ from Colt M1878 as well as they differ from each other.

For reference: Stoeger imported Coach Western side by side shotgun with exposed hammers - 12 gauge. This is a modern version of classic Western coach gun.

A coach gun is seen in hands of Sheriff Romero's deputy at the far right.

The same character with the shotgun is seen at the left.

A coach gun (on the top) is seen on the wall in Sheriff Garrett's office.

For reference: J. Stevens and Company Side by Side Shotgun (Circa 1878) exposed hammers and designed to fire Black Powder shotgun shells - 12 gauge

Tom Pickett's shotgun is seen in the corner. The barrels are longer than on a typical coach gun but not as long as on full-length hunting shotguns. In the next scene it switches to a much shorter Colt 1878.