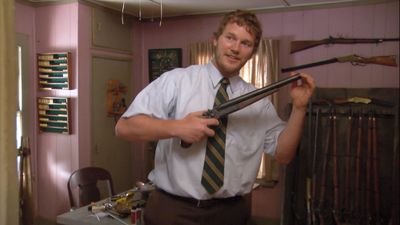 Chris Pratt with a Sawn-off Double Barreled Shotgun as Andy Dwyer in Parks and Recreation (2011). 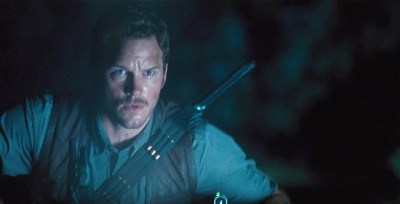 Chris Pratt as Joshua Faraday opens fire with a Winchester Model 1873 cut down as a "Mare's Leg" in The Magnificent Seven (2016).

Chris Pratt as Peter Quill/Star-Lord in Thor: Love and Thunder (2022).

Chris Pratt is an American actor who received breakthrough recognition for his role as Andy Dwyer in sitcom Parks and Recreation. He is most known for his roles as Star-Lord in several Marvel Cinematic Universe productions, as Owen Grady in the Jurassic World film trilogy, and James Reece in the Amazon Prime series The Terminal List. An avid hunter and firearm collector, Pratt is also noted for his openly pro-gun stances.