Jurassic Park is the 1993 feature film adaptation of the Michael Crichton bestseller of the same name. Directed by Steven Spielberg, the film is set in a state-of-the-art amusement park where dinosaurs have been brought back to life via genetic engineering. After a computer malfunction, the dinosaurs become a threat to those remaining on the island. The film was a huge success, surpassing Spielberg's own E.T. to become the highest grossing film of all time until 1997's Titanic. The film would subsequently spawn a feature film franchise, including 1997's The Lost World: Jurassic Park, 2001's Jurassic Park III, 2015's Jurassic World, 2018's Jurassic World: Fallen Kingdom, and 2022's Jurassic World: Dominion as well as a video game series as well as Jurassic World: Camp Cretaceous, a Netflix CG animated show.

The following weapons were used in the film Jurassic Park (1993):

Franchi SPAS-12s are used by Robert Muldoon (Bob Peck) and Dr. Alan Grant (Sam Neill) over the course of the movie, also seen in the hands of several InGen workers in the introduction and in the gun lockers. It is last seen lying discarded on the computer room floor after jamming due to a stovepipe malfunction when Grant used it to try to fend off an attacking Velociraptor. 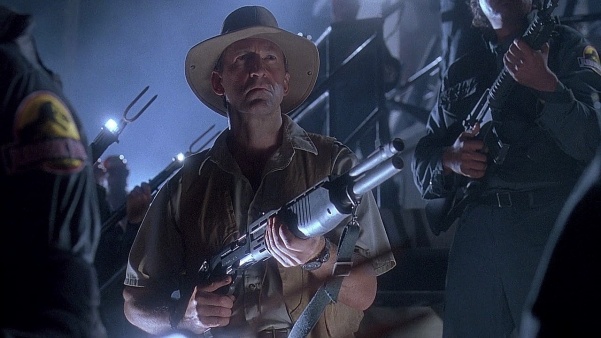 Muldoon oversees the loading of a Velociraptor armed with a SPAS-12 shotgun. 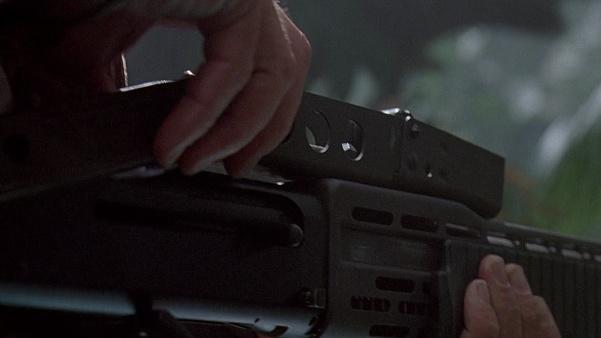 Muldoon starts to unfold the stock on his SPAS-12 shotgun. 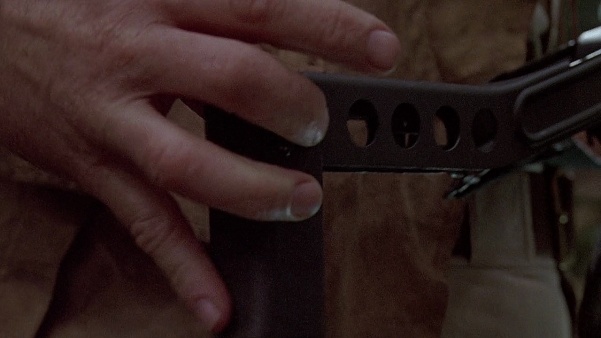 Muldoon folds down the butt on his SPAS-12. 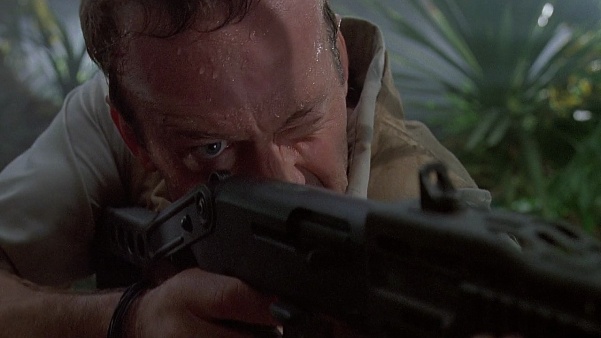 Muldoon takes aim at a Velociraptor with his SPAS-12. 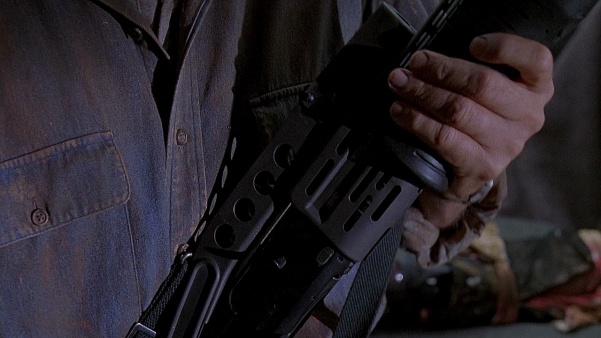 Grant pumps the action on a SPAS-12. 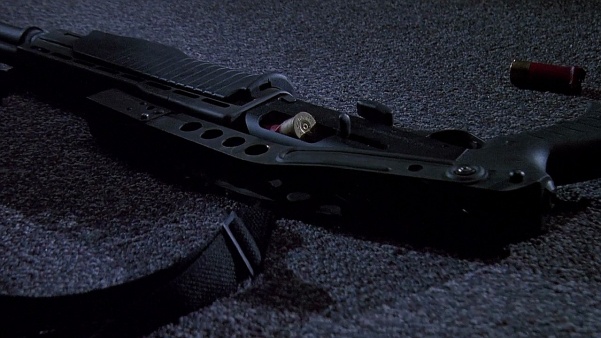 Grant throws down the SPAS-12 after it jams. The jam appears to be an extractor malfunction, resulting in a shell in the breech holding back a loaded round from being chambered, commonly known as a 'stovepipe'. Such a jam is relatively straightforward to clear in reality, however it's likely Grant might not be familiar enough with firearms to know how to do so. The shells used in this scene are most likely dummy rounds given how fragile they appear. This image also reveals that the SPAS-12 is an early FIE-imported version with the lever safety. 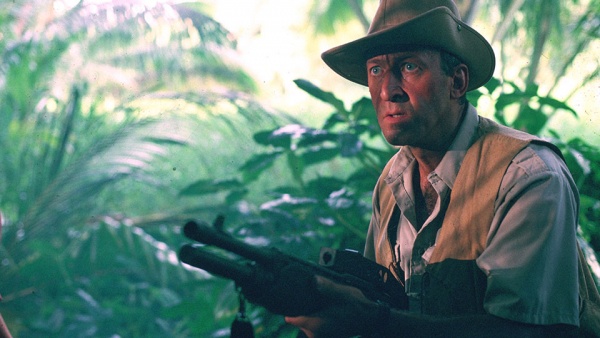 Production still of Muldoon with the SPAS-12.

The M16A2 is carried by several InGen security guards in the beginning of the film. Later, when the group first visits the Raptor holding pen, guards are seen with M16A2s slung on their backs, and more of the rifles are later visible in the gun lockers in the emergency bunker. Most of the M16A2s carried by the workers can be seen fitted with weapon lights mounted on the barrels ahead of the front sights. 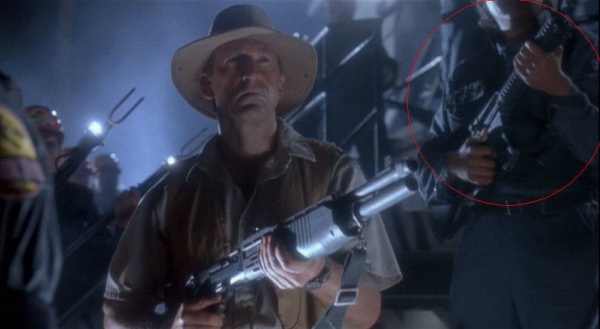 One of the InGen workers next to Muldoon armed with an M16A2. 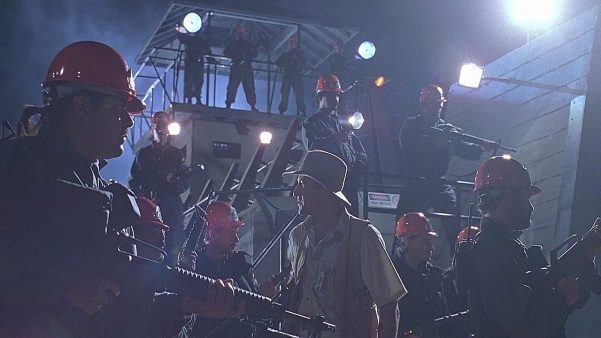 An InGen worker armed with an M16A2. 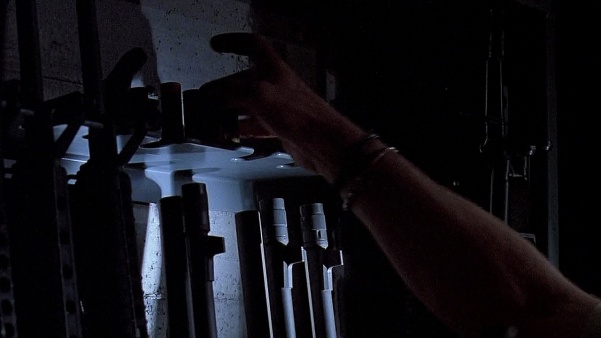 M16A2 rifles seen in the gun locker as Muldoon grabs a SPAS 12.

A couple of Heckler & Koch HK91A2s can be seen briefly inside the gun locker, from which Muldoon grabs a SPAS-12.

Some of the InGen workers are also seen with 'slab-side' M16 Rifles, or possible AR-15/SP1s. Then again, they could be simple rubber props modeled after said rifles. They are fitted with A2-style handguards to pass for an M16A2. 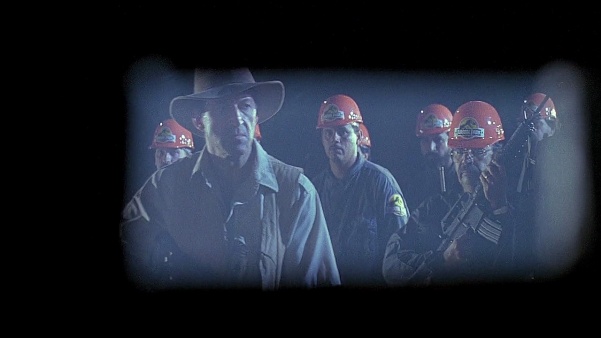 An InGen worker is seen armed with a slab-side M16 rifle when the Velociraptor looks out of its cage.

InGen security guards overseeing a Velociraptor being transferred to the holding pen are seen with cattle prods. The film-used props in actuality were Mares Spear Guns with added bits and bobs on them. 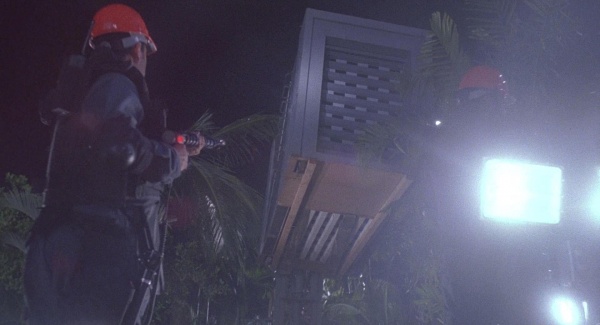 A security guard is seen with a cattle prod. 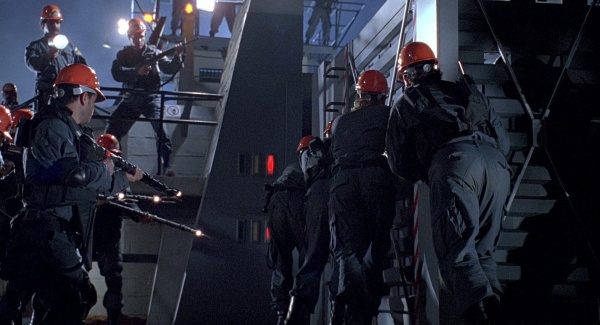 Security guards at the ready with their cattle prods. 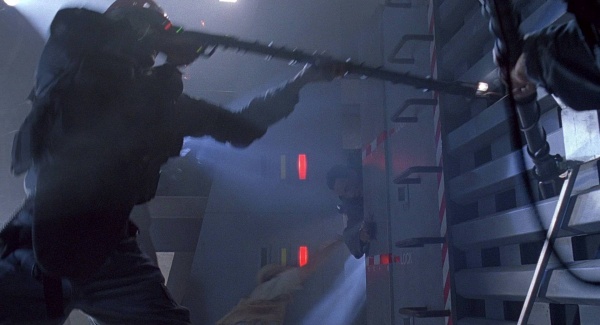 Security guards attempt to subdue the Velociraptor with their cattle prods.