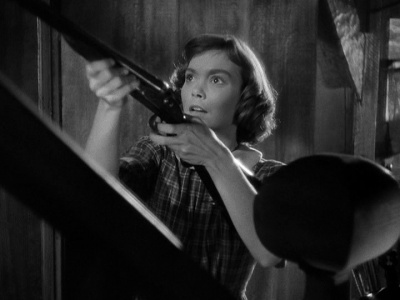 Jane Wyman (1917–2007) with a Double Barreled Shotgun as Belinda McDonald in Johnny Belinda.

Jane Wyman was an American actress, most famous for her Academy Award-winning role in the 1948 drama Johnny Belinda and as a regular in the 1980's prime time soap opera Falcon Crest. She was the first wife of actor and future American president Ronald Reagan, with whom she had two children, the late actress and politician Maureen Reagan, and political commentator Michael Reagan.