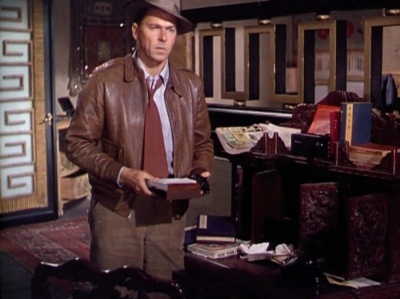 Ronald Reagan (1911–2004) with a Colt Detective Special as Jeff Williams in Hong Kong.

Prior to serving as the 40th President of the United States, Ronald Reagan was an American broadcaster and actor. His film career reached its peak in 1942, right after the American entry into World War II, but lost much of its momentum as he, like many other actors, took time off for military service. His poor eyesight blocked him from service overseas and meant his military service consisted largely of producing training films as part of the 1st Motion Picture Unit. He spent much of his later career making B-movies and in television before being elected president of the Screen Actors Guild, which led to two terms as Governor of California and two terms as President of the United States. There his life would be saved by Agent Jerry Parr, who had been inspired to join the Secret Service by Code of the Secret Service, one of Reagan's most hated roles.