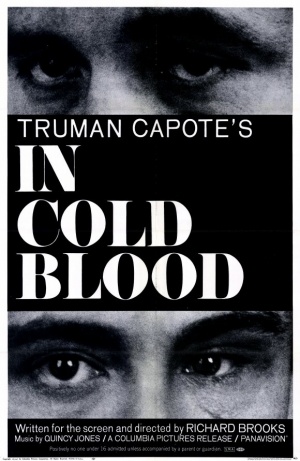 In Cold Blood is the 1967 feature film adaptation of the Truman Capote nonfiction novel about the infamous Clutter murders that occurred on November 15, 1959 in Holcomb, Kansas. The film was directed by Richard Brooks (Bite The Bullet & The Professionals) and the cast includes Scott Wilson and Robert Blake and much of the movie was filmed on location, including the actual Clutter home.

The following weapons were used in the film In Cold Blood:

The Sheriff (Al Christy) carries a Smith & Wesson Model 10 in his holster.

The Sheriff re-holsters his Smith & Wesson.

Dewey draws his Detective Special when chasing the stranger at the Clutter home.

Dick Hickock (Scott Wilson) and Perry Smith (Robert Blake) use the Savage/Stevens Model 30 as their principal weapon during the murder/robbery in Kansas.

Dick with his Stevens Model 30.

A detective finds Dick's shotgun packed away at his father's shack.

The shotgun in the back of Dick's car before the murders.

Perry walks through the Clutter house with Dick's shotgun.

Dick sets the shotgun on a desk while looking for Herb Clutter's money.

A long-barreled Remington 870 is seen used by a man shopping at the store where Dick and Perry buy supplies for the murder/robbery. A detective is seen with a Riot model while searching for the killers.

A man in the background tests a Remington 870.

A detective is seen with a Riot model while searching for the killers.

A stranger hiding in the Clutter home holds a Winchester Model 1897 before Dewey chases him away.

The stranger's Winchester is silhouetted in the window.

Perry has a vision of his father John "Tex" Smith (Charles McGraw) aiming a bolt-action rifle at him.

Perry's father aims a rifle at him.
Retrieved from "https://www.imfdb.org/index.php?title=In_Cold_Blood&oldid=1396246"
Categories: