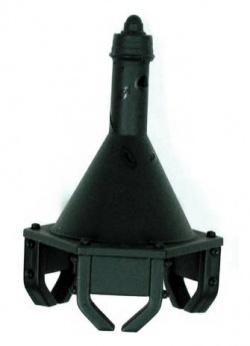 The Hafthohlladung ("adhesive hollow charge") also known as the "Panzerknacker" (Tank breaker) is a German shaped-charge anti-tank weapon developed in 1942: it is usually referred to as a grenade, though it realistically needed to be placed on the target rather than thrown. It was mainly used by the German tank-killer troops between 1942 and 1944. Three powerful magnets at the base of the device allowed the user to attach it to any kind of opposing tank or heavy vehicle with the base providing the proper standoff distance for the jet of metal to form correctly. After placement, it was armed by pulling an igniter on the base. While the Germans were sufficiently respectful of their invention that they developed an anti-magnetic paste (Zimmerit) for their own vehicles, no other power in World War II fielded such a system, or for that matter fielded magnetic anti-tank weapons in quantity.

Two variants were produced, the bottle-shaped 3-kilogram H3 and the conical 3.5-kilogram H3.5. They were declared obsolete in 1944 following the adoption of the Panzerfaust, but remained in use until the existing stockpiles were depleted.

The Hafthohlladung anti tank grenade can be seen in the following: