Drum Beat is an American 1954 Western movie directed by Delmer Daves. During the Modoc War (1872-1873) Johnny MacKay (Alan Ladd) is sent by President Grant to negotiate peace with the Modocs in California and Oregon. MacKay confronts a group of Modoc warriors, lead by Kintpuash, also known as Captain Jack (Charles Bronson).

The following weapons were used in the film Drum Beat:

Single Action Army Civilian Model revolvers are used by several of Captain Jack's (Charles Bronson) warriors during the massacre on peace negotiation. Johnny MacKay (Alan Ladd) also uses a Civilian model revolver in this scene, though he uses an Artillery model throughout the movie. Its worth noting that the events happen a little early for use of Single Action Army revolvers that appeared in 1873.

The gun drops from his hand.

A Modoc warrior claims that he killed Johnny.

Johnny's revolver is seen on ground.

Johnny fires at Modoc Jim during the attack on the stagecoach.

Another view of Johnny's revolver in same scene.

Bill Satterwhite fires at Modoc Jim. In this scene he is at first seen with a Colt 1878 Double Action (see below) that switches to a Single Action Army.

Johnny holds his revolver during the arrest of Captain Jack. The staghorn grip is seen. 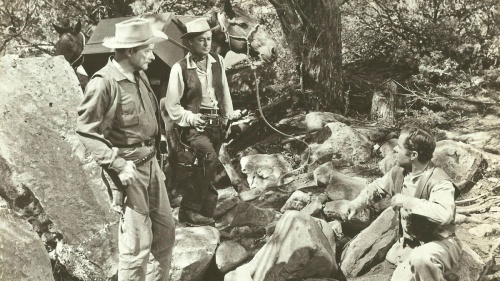 Johnny MacKay holds his revolver on a promotion still in the scene of the arrest of Captain Jack's ally Blaine Crackel (Elisha Cook Jr.). In the film itself this scene is too dark for a good screenshot. 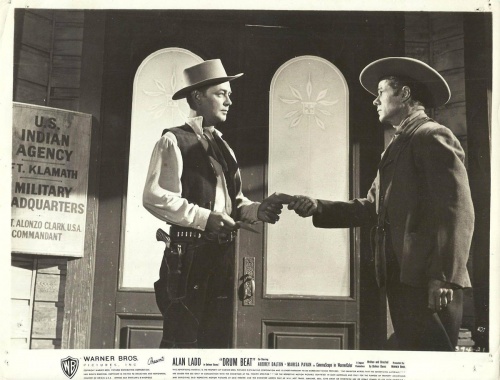 Johnny MacKay carries his revolver in holster on a promotion still. The staghorn grip is seen. 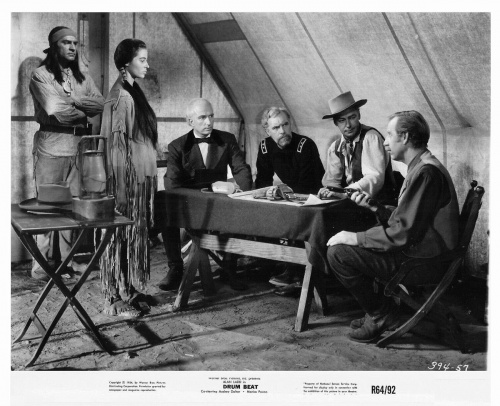 Mr. Dyar, a member of US government delegation, holds a revolver that he takes with him, fearing a treacherous attack from the Modocs. In the film itself this scene is too brief for a good screenshot.

Capt. Clark leads his soldiers in attack with a revolver in hand.

Another view of Capt. Clark's revolver.

Colt 1878 Double Action revolvers, anachronistic for Modoc War era, are used by Bill Satterwhite (Robert Keith) during the ambush on the stagecoach and by Captain Jack (Charles Bronson) when the Modoc warchief kills Gen. Canby. 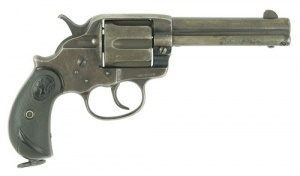 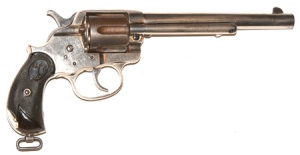 He drives away Modoc Jim. The revolver has 7.5" barrel.

Captain Jack fires at Gen. Canby, eyes closed. His revolver has 4" or 5" barrel. In previous moment Captain Jack is seen with a Single Action Army. 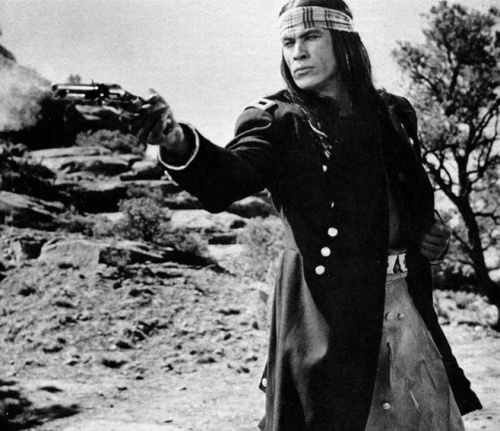 The murder of Gen. Canby by Captain Jack on a promotion still.

Heavily anachronistic Winchester Model 1892 rifles and carbines are widely used in the movie.

A Modoc warrior on guard.

...but Captain Jack pushes the rifle away.

Johnny MacKay takes the Winchester from Blaine Crackel (Elisha Cook Jr.) when Crackel is caught trying to deliver guns to Modocs. The saddle ring is seen.

Scarface Charlie (at the right) and several other Modocs hold Winchesters when Captain Jack prepares for the murder of US government delegation.

Scarface Charlie holds his Winchester when a group of Modocs surrender.

Winchester 1892 rifle and carbine are seen in hands of Modoc warriors.

A Winchester 1892 rifle is seen at the left.

A Modoc warrior at the right holds a Winchester 1892 rifle.

Scarface Charlie with a Winchester 1892 rifle.

A Winchester 1892 with fake "musket" stock is seen at the left.

Same looking rifle is seen in hands of a Modoc warrior at background right in the scene in mountain stronghold.

Modocs fire at US Army cavalrymen. Winchester 1892 receivers allow to identify the base rifle.

One of these "muskets" in hands of a victorious Modoc at the right.

In several scenes Captain Jack (Charles Bronson) carries a rifle that appears to be a Stevens single shot rifle model.

A closer view of the rifle in same scene.

Captain Jack holds his rifle during the confrontation with Johnny MacKay.

The engraved buttstock of the rifle is seen.

Captain Jack among his victorious warriors. 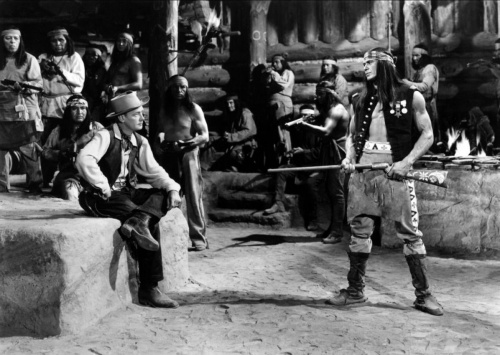 A good view of Captain Jack's rifle on a promotion image. 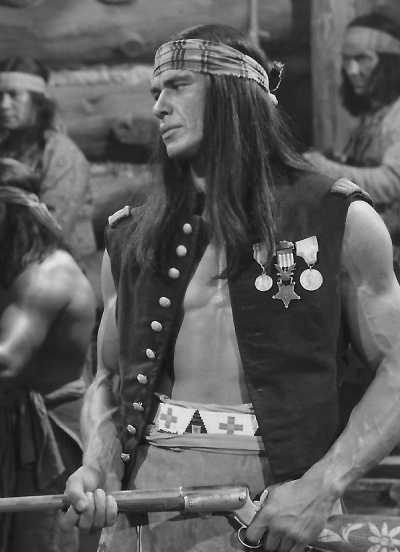 A close view of same scene on another promotion image. 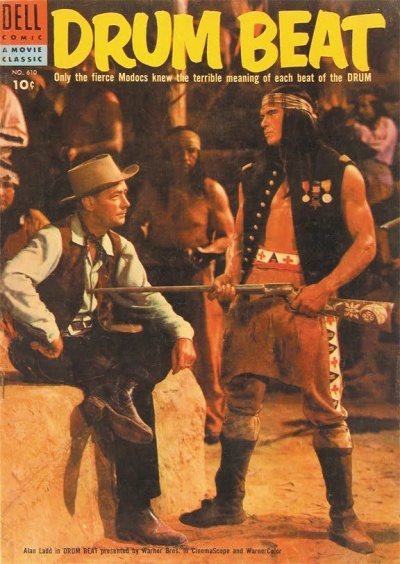 Same scene on a poster.

In one scene Bill Satterwhite (Robert Keith) is armed with a Springfield 1873 Trapdoor Carbine. Trapdoor carbines are also used by US Army cavalrymen and armed settlers.

A cavalryman fires his carbine.

Bill Satterwhite holds a Trapdoor carbine during the arrest of Blaine Crackel.

Another view of Bill Satterwhite's carbine (at the left).

Cavalrymen stand in formation with their carbines.

Trapdoor carbines are seen in hands of settlers.

Some cavalrymen are armed with full-length rifles.

A light field (or mountain) muzzleloading cannon is used by US troops. It is supposed to be a 3-inch Ordnance rifle Model 1861 (or at least a replica based on this artillery piece).

An artilleryman aims and fires the cannon.

The shot is a pyrotechnical effect as the cannon doesn't recoil.
Retrieved from "https://www.imfdb.org/index.php?title=Drum_Beat&oldid=1537013"
Categories: