Dauria (also spelled Dauriya) is a Soviet 1972 (filmed 1971) two-part historical movie directed by Viktor Tregubovich and based on the novel by Konstantin Sedykh. This epic movie describes the life and fate of Cossacks in the Siberian province of Dauria in Summer 1914 (Part 1) and during the Russian Civil war, in 1918-1919 (Part 2). The story centers around the family of Ulybins.

The following weapons were used in the film Dauria:

Village blacksmith Semyon Nagorny draws a Nagant when Cossacks come to arrest him.

An Anarchist (stunt performer Boris Vasilyuk) holds a Nagant during the assault of Chita treasury in Part 2.

Another Anarchist fires his Nagant in same scene.

A White Colonel holds a Nagant during the battle for railway station. His revolver is bright nickel plated; possibly this is the same prop that was used in Baltiyskaya slava, filmed by same studio.

A Red partisan at the right holds a Nagant.

A Reichsrevolver M1879 is seen in several scenes in Part 2. It is used by Anarchist Arkadiy (uncredited) during the assault of Chita treasury, by the manager of gold mine (uncredited), and by White Cossack Starshiy Uryadnik (Cossack NCO) Nikifor Chepalov (Viktor Pavlov). This wiped to white revolver appears to be the same prop, used in numerous Lenfilm productions, like Priklucheniya Sherlocka Holmsa i doktora Vatsona.

An Anarchist holds a Reichsrevolver M1879.

The manager of gold mine escapes, pursued by Red partisans.

Another view of the revolver of said character.

Mauser C96 pistols are widely seen in Part 2. They are used by the commander of Red Guards Roman Severyanovich Ulybin (Vitali Solomin), Red Cossack Fedot Muratov (Mikhail Kokshenov) and several other Reds, and by Anarchists, including their chief Georgiy Ivanovich Lavrov (Georgiy Shtil).

Roman and Fedot hold Mausers during the assault of Anarchists on Chita treasury.

An Anarchist (Viktor Vesyolkin) with a Mauser.

A good view of Fedot's Mauser.

Roman Ulybin fires at a White officer who tries to escape.

Mosin Nagant M1891 rifles are seen in several scenes. In Part 1 an escaped convict Taras (Yuriy Nazarov) holds a rifle when he hides in swamp. In Part 2 rifles are used by Red Guards and partisans.

A wounded Red Guard with rifle during the battle for railway station.

A Red Guard with a rifle on the roof of the armoured train.

Platon Volokitin (at the right) and another Cossack with carbines during the hunt for escaped convicts.

Cossacks hunt for escaped convicts. Roman Ulybin (at the left) holds his carbine and the gun of Ataman Kargin who leads the Cossacks with a sword in hand. Also carbines are seen in hands of Nikifor Chepalov (behind Kargin) and Yepifan Kozulin (at the right).

A close view of Chepalov's carbine when he fires at escaped convict Taras. Note the lack of the front sight.

The barrel of Roman's carbine is seen. It also lacks the front sight.

Fedot Muratov (Mikhail Kokshenov) fires a carbine during the battle for the railway station. Again the carbine lacks the front sight.

Another view of Muratov firing a carbine.

A White Cossack with a carbine.

A Red partisan carries a carbine. Unlike many other M38s, this one has its front sight intact.

A Cossack in center carries his "Frolovka" on shoulder. Another Cossack is armed with M38 Carbine.

The long thin barrel of "Frolovka" is seen. 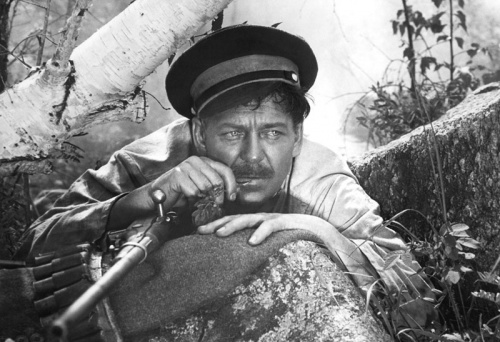 A Cossack holds a "Frolovka" at the background.

A different bolt action shotgun is seen in hands of Roman Ulybin (Vitali Solomin) and his younger bother Gan'ka (Yevgeni Malyantsev). This weapon appears to be a genuine "Berdanka", Berdan Rifle converted to shotgun.

Roman holds the shotgun during the wolf hunt.

Maxim M1910 machine guns are used by Reds and Anachists in Part 2.

An Anarchist of Lavrov's unit carries the body of Maxim M1910 on his shoulder.

Roman Ulybin (Vitali Solomin) fires a Maxim M1910 during the battle for the railway station. His Maxim is fed with metal belt that appeared much later; in 1910s Russian Maxim machine guns used only canvas belts.

A Maxim on the locomotive.

A Red Guard fires a Maxim.

Maxim M1910/30 machine guns are used by Anarchists, Red Guards and partisans in Part 2. Both original and post-1940 versions are seen.

A Maxim in Lavrov's headquarters.

Red Cossack Gerasim (Igor Milonov) fires a Maxim from the rooftop during the battle for the railway station. His Maxim is fed with metal belt that appeared much later; in 1910s Russian Maxim machine guns used only canvas belts.

Another Red Guards' Maxim in action (the same prop reused).

Another view of Gerasim's Maxim.

Due to a continuity error, Gerasim's Maxim switches to a different machine gun, of post-1940 version.

A Maxim of post-1940 version is seen in the village armoury (top right).

In Part 2 anachronistic F-1 hand grenades are used in several scenes, used by Semyon Nagorny (Yuriy Solomin) and by Anarchists.

Bolshevik Semyon Nagorniy uses a grenade to blow crates of dynamite and destroy White armoured train in cost of his life.

An Anarchist throws a grenade during the assault of Chita treasury.

Mockups of RG-14 hand grenades are seen in Part 2.

Anarchist sailors of Lavrov's group carry F-1 and RG-14 hand grenades. Note that RG-14s lack holes for fuzes that proves them to be mockups.

An Anarchist sailor carries an RG-14.

Roman Ulybin throws a stick hand grenade at Anarchists during the assault of Chita treasury. It is probably one of the same mockup RG-14s.

A White officer holds same looking stick hand grenade during the battle for railway station. He carries a holster for TT-33 pistol.

An officer in charge of prison guards convoy carries a holster for TT-33 pistol (Part 1).

A replica of armoured train is used in the movie. It appears at first as the Whites train, and then as the Reds one.

A Hotchkiss Mk.I machine gun is seen mounted on a Mark IV or Mark V tank.

Russian soldiers of the Great War.

Red sailors in attack (it appears to be taken from some earlier movie rather than from documentary footage).

Russian 122mm field howitzers M1909 are seen in footage (it appears to be taken from some earlier movie rather than from documentary footage).

A Hotchkiss Mk.I machine gun is seen mounted on a tank.

A 6-pounder gun is seen on a tank. 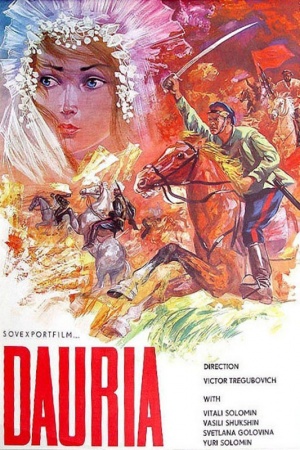