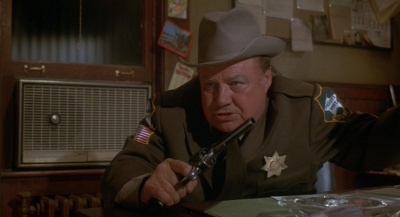 Clifton James (1920-2017) with a New Service as Sheriff Chauncey in Silver Streak.

Clifton James (May 29, 1920 - April 15, 2017) was an American actor best known for playing Southern sheriffs (and redneck buffoons) in various films and television series including roles in Superman II and Silver Streak Clifton James was born and raised in Spokane, Washington and was a graduate of the Actor's Studio. In addition to his many roles on stage and screen (his most famous role was as Sheriff J.W. Pepper in the James Bond films Live and Let Die and The Man with the Golden Gun ) James was a decorated World War II United States Army veteran. He served as an infantry soldier with the 163rd Infantry Regiment., 41st Infantry Division. He served over three years in the Pacific theater (January 1942 - August 1945). His decorations include the Silver Star, Bronze Star, and two Purple Hearts. He passed away April 15, 2017 at the age of ninety-six.