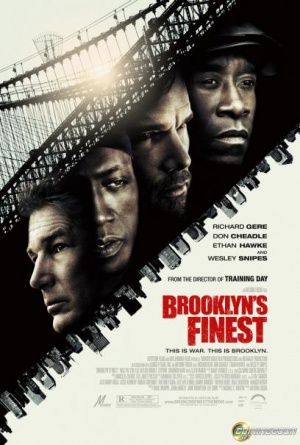 Brooklyn's Finest is a 2009 American crime drama that focuses on three NYPD officers, one an aging, disillusioned patrol officer, another an aspiring cop trying to make detective, and the third a detective trying to support his growing family with a policeman's salary. The film, which was directed by Antoine Fuqua (Training Day), starred Richard Gere, Don Cheadle, Ethan Hawke, and Wesley Snipes.

The following weapons were used in the film Brooklyn's Finest:

Detective Salvatore "Sal" Procida (Ethan Hawke) points his Glock 19 at a gangster during a drug raid.

Sal takes out his Glock 19 during the climax.

Sal prepares to enter an apartment being used as a dope house, with his Glock 19 ready.

Sal fires his Glock 19 in the dope house.

Mixed in with the Glock 19s are several Glock 17s, which are carried by NYPD officers and some drug dealers. Apparently, the film's armorer didn't have enough Glock 19s available to go around.

An NYPD officer mocks Officer Eddie Dugan with his Glock 17 in his holster.

During a drug raid, a drug dealer is shot by NYPD ESU officers while holding a Glock 17.

An NYPD officer points his Glock 17 at a drug dealer.

A drug dealer pistol-whips a "snitch" with his Glock 17.

A rookie NYPD officer's Glock 17 is dropped on the floor of a convenience store after a negligent discharge.

Detective Clarence "Tango" Butler (Don Cheadle) uses a nickel-plated Jericho 941 R in the climax, which he keeps in a stash box. It's not clear whether this is his duty sidearm or a personally-owned weapon.

Another view of the Jericho 941 R in the stash box when Tango takes it out in the climax.

Tango reloads his Jericho after emptying a magazine.

Tango puts his P220 back in the stash box, switching it out for his Jericho 941. 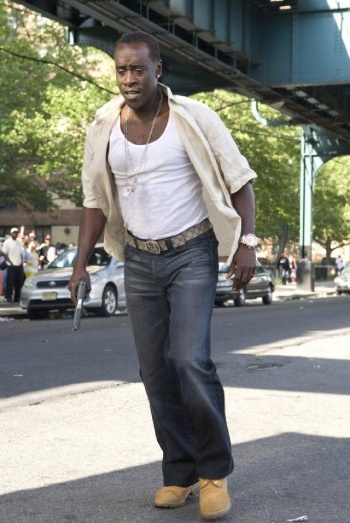 A promotional still of Tango (Don Cheadle) with his SIG-Sauer P220.

Officer Edward "Eddie" Dugan (Richard Gere) carries a Smith & Wesson Model 10HB (heavy barrel) as his main sidearm throughout the film. While the NYPD switched over to semi-automatic pistols in 1994, Dugan's revolver would have been allowed because that was what he was carrying prior to the changeover. Older officers were grandfathered in if they wanted to keep carrying their revolvers. 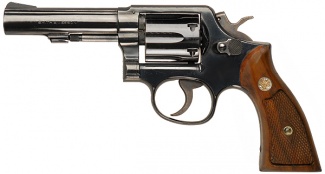 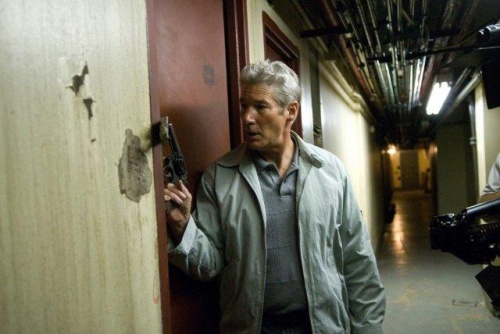 A promotional still of Eddie (Richard Gere) with his revolver.

An NYPD ESU officer blazes full-auto his MP5A3 into a bathroom door after being shot at by a gangster inside.

An NYPD ESU officer armed with the MP5A3 submachine gun tells innocent bystanders to get down during a drug raid.

An NYPD ESU officer is seen with the M4A1 Carbine.

An NYPD ESU officer stands guard with his M4A1 Carbine near a burning police car.
Retrieved from "https://www.imfdb.org/index.php?title=Brooklyn%27s_Finest&oldid=1321888"
Categories: