Training Day is a 2001 American crime thriller that follows Jake Hoyt (Ethan Hawke), a rookie LAPD officer who is eager to begin his first day in an elite vice unit headed up by Alonzo Harris (Denzel Washington), a charismatic detective who has unorthodox methods of solving cases. The film was directed by Antoine Fuqua from a screenplay written by David Ayer. Denzel Washington would receive the Academy Award for Best Actor for his role in the film. In 2017, a television series adaptation, serving as the sequel to the film, premiered in the US on CBS and was produced by Fuqua and Jerry Bruckheimer. Training Day also marked the first of Fuqua's four collaborations with Denzel Washington.

The following weapons were used in the film Training Day:

Detective Alonzo Harris (Denzel Washington) carries two Smith & Wesson 4506-1 pistols throughout the film. .45 ACP handguns were approved for LAPD carry after the infamous North Hollywood shootout. In one scene, where Alonzo and Jake come under fire from a gang of Crips while serving a warrant in the Imperial Courts neighborhood of Watts, he fires both weapons simultaneously, holding one sideways "gangsta"-style. Two Smith & Wesson 4506s from this film would later be re-used by Michael Chiklis for the series The Shield. 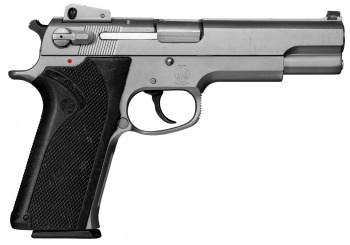 Smith & Wesson 4506 - .45 ACP. This is one of the screen-used firearms carried by Denzel Washington in the film Training Day and also the television series The Shield. Thanks to James Georgopoulos. 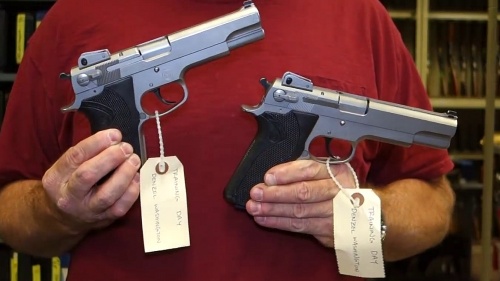 Alonzo Harris (Denzel Washington) points one of his S&W 4506 pistols at a college junkie in a VW Bug.

Alonzo points one of his S&W 4506s at Jake, demanding he smoke from a pipe.

Alonzo firing at Crips in Watts.

Jake loads his department-issue Beretta 92FS at the beginning of the film.

Jake Hoyt (Ethan Hawke) draws his Beretta when he and Alonzo pull over the college kids in the VW Bug.

Jake draws his Beretta on Sandman's wife (Macy Gray) when he and Alonzo raid her house.

The stainless Beretta 92FS Inox appears several times in the film. Tim (Nick Chinlund), one of the men in Alonzo's unit, is seen carrying one during the raid on the house of Roger (Scott Glenn). Smiley (Cliff Curtis) also has one, which he shows off to Jake in a not-so-subtle attempt at intimidation.

Tim (Nick Chinlund) searches Roger while pointing his Beretta 92FS Inox at him.

Mark (Jaime Gomez), one of the men in Alonzo's unit, carries a second generation Glock 17. When Jake confronts Alonzo at his girlfriend's apartment, Alonzo hands over a Glock 17 with a stainless slide. Some of the Crip gangbangers in the shootout in Watts also carry Glock 17s. They can be identified as Second Gen by the lack of rails or finger grooves.

Alonzo surrenders a Glock 17 with a stainless slide to Jake.

The smaller Glock 19 also appears several times in the film. When Alonzo and Jake arrest the wheelchair-bound drug dealer Blue (Snoop Dogg), they confiscate a Glock 19 from him. Paul (Dr. Dre), one of the men in Alonzo's unit, also carries a Glock 19 which he uses to threaten Jake during the standoff in Roger's house. Finally, some of the Crips in Watts are also seen with Glock 19s.

Alonzo holding a Glock 19 he has just taken from the drug dealer Blue (Snoop Dogg).

Intratec TEC-38 Over Under Pocket Pistol

When Alonzo and his men raid Roger's house, Roger (Scott Glenn) is seen dropping what appear to be two Intratec TEC-38 Over Under Pocket Pistols (aka Derringers) that he had concealed in the newspaper he was reading. 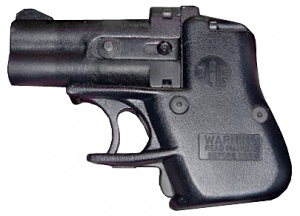 A SIG-Sauer P226 is carried by Jeff (Peter Greene), one of Alonzo's men. It is only seen very briefly when Jeff peeks into one of the windows of Roger's house during the raid.

Jeff about to peek into Roger's window with his SIG-Sauer P226 in hand.

Alonzo fires a Colt M1911A1-type pistol (specific make unknown) at Jake after Jake jumps onto the hood of his car when he's trying to drive off with the money. Jake later takes this pistol and points it at Alonzo, shooting him when he tries to take Bone's Smith & Wesson Model 66.

Bone (Cle Shaheed Sloan) carries a snub-nosed Smith & Wesson Model 66 with a rounded butt, as you can see when he places it down.

Paul (Dr. Dre) carries a Heckler & Koch MP5A3 submachine gun (with Navy trigger group) during the raid on Roger's house. It seems to be attached to his ballistic vest with some kind of lanyard. The MP5A3 used in this film was an airsoft replica made by Tokyo Marui, likely because Dr. Dre has a criminal record in real life and the armorer was unable to secure the necessary permit for him to hold a real NFA weapon.

Three men preparing to raid Roger's house. From left to right: Tim with a Beretta Inox, Paul with an H&K MP5A3, and Jake with a Mossberg 500 Cruiser.

Paul outside of Roger's house after the raid with his H&K MP5A3 slung from his shoulder. Note that the bolt is up, but the ejection port is not open, as it would be on a real MP5 - an indication that the weapon is actually an airsoft replica (the Tokyo Marui MP5, which is one of the most common airsoft MP5s to appear in films, does not have a functional ejection port).

A Mossberg 500 Cruiser shotgun is used by Jake during the raid on Roger's house. Alonzo later asks Jake to shoot Roger with this weapon, and when Jake refuses, Alonzo takes the Mossberg and kills Roger himself. In real life, the LAPD would have been issued a Mossberg 500 Cruiser with a heat-shield.

Three men preparing to raid Roger's house. From left to right: Tim with a Beretta Inox, Paul with an H&K MP5A3, and Jake with a Mossberg 500 Cruiser.

Jake pointing the Cruiser at Roger.

Smiley (Cliff Curtis) and his homies, Sniper (Raymond Cruz) and Moreno (Noel Gugliemi), hold Jake captive with a sawed-off Stoeger Uplander which has black electrical tape wrapped around the grip.

Smiley points his sawed-off shotgun at Jake in the bathroom.

Smiley hands the shotgun to Moreno (Noel Gugliemi) after deciding not to kill Jake.

When Jake confronts Alonzo at his girlfriend's apartment and disarms him of all his pistols, Alonzo distracts Jake and then reaches under his bed for a Remington 870 with sawed-off stock, heat-shield, extended magazine tube and a Mark 1 bayonet mount. Earlier in the film, when Alonzo and Jake drive past the scene of a major drug bust, an LAPD officer can be seen pointing a standard model Remington 870 at several Latino gangbangers.

Alonzo points his sawed-off Remington 870 at his own son.

Alonzo fires his Remington 870 at Jake.

When Jake returns to the Imperial Courts at night, he hears the racking action of a pump shotgun. A gang member is then seen on the roof with what appears to be a long barreled model of the Remington 870.

The gang member squatting on the left appears to be armed with a long barreled shotgun.

The Russian mafia hit squad at the end of the film all carry AKMSU carbines that are used in an ambush. When Jake returns to the Imperial Courts at night, a gang member on the roof is seen armed with what appears to be an AKMSU and makes threats saying "What you doing on the block, Rookie?" and "You know you don't belong here".

The gang member standing is briefly seen with what appears to be an AKMSU.