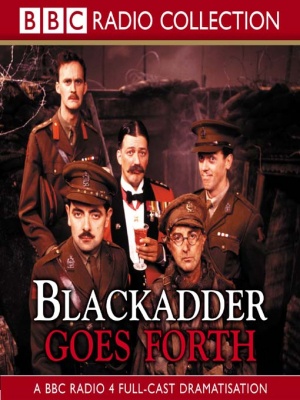 Blackadder Goes Forth is the fourth and final series of the critically acclaimed historical television comedy Blackadder, set in 1917 World War I on the Western Front. Captain Edmund Blackadder (Rowan Atkinson) joined the British Army when it was "little more than a travel agency for gentlemen with an abnormally high sex drive." Now he's twenty yards away from a lot of heavily armed people who want to kill him. Worse still, his fellow officer Lt. George (Hugh Laurie) is a man whose family brain cell is gathering dust in a pawn shop in Dunstable, and his valet Baldrick (Tony Robinson) is in charge of cooking. As he gets closer and closer to the big push, Blackadder attempts to cook up numerous schemes to escape the trenches and his idiotic commanding officer, General Melchett (Stephen Fry). The famous final episode was more dark and somber than people expected, dealing with the futility and waste of war, with a poignant ending.

The following weapons were used in the television series Blackadder Goes Forth:

The Webley Mk VI revolver, the main service revolver of the British Army in World War One, is used by Captain Edmund Blackadder (Rowan Atkinson), Lt. George (Hugh Laurie), Captain Darling (Tim McInnerny), General Melchett (Stephen Fry) and other characters throughout the series. The most notable use of the Webley is when Captain Blackadder uses one to shoot General Melchett's personal carrier pigeon which results in him being court-martialed in "Corporal Punishment" and when Melchett pulls one out and shoots Captain Darling in the foot so he can go undercover in the field hospital in the episode "General Hospital". Lord Flashheart (Rik Mayall) uses one, in the episode, "Private Plane" notably, just holding it around while boasting. 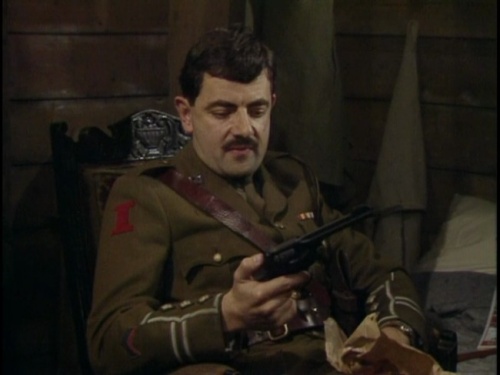 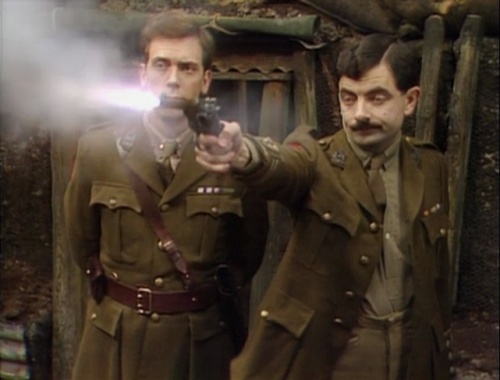 "...and Captain Blackadder definitely did not shoot this delicious plump-breasted pigeon!" 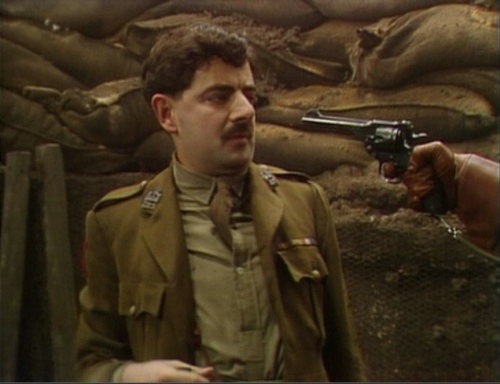 Lord Flashheart holds his Webley on Blackadder, mistakenly believing he was behind German lines. 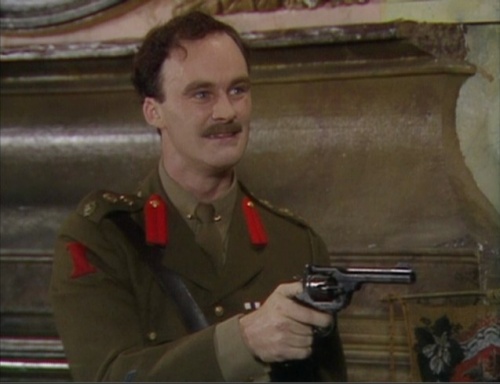 Captain Darling holds his Webley on the man he believes is the German spy. 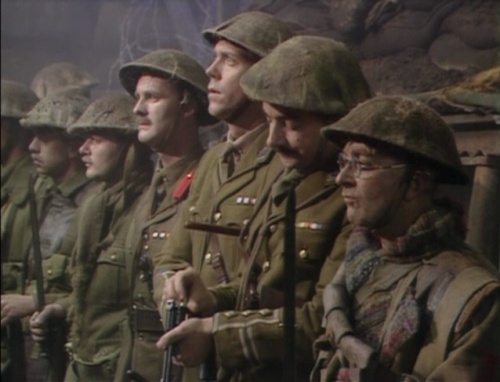 Blackadder loads his Webley before going over the top in "Goodbyeee." He is only loading five rounds, though the revolver can carry six. The missing sixth round is probably due to a safety factor with the Webley revolver. A round loaded just beneath the hammer could be accidentally discharged should the revolver be dropped on its hammer, even though its not cocked.

Private S. Baldrick (Tony Robinson), the only one of the main characters whom is not an officer, is seen with the Lee-Enfield No. 1 Mk III* rifle throughout the series. Blackadder's Company use them in drill in the opening credits of each episode. 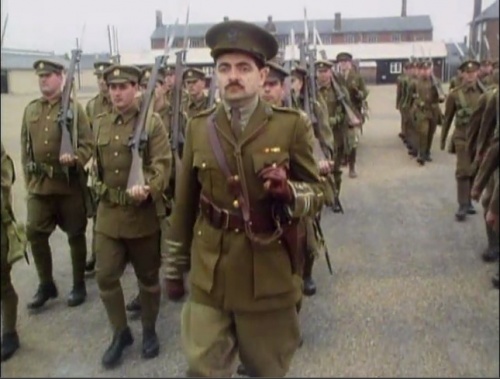 The men of the real Royal Anglian Regiment march with Lee-Enfields during the opening credits. 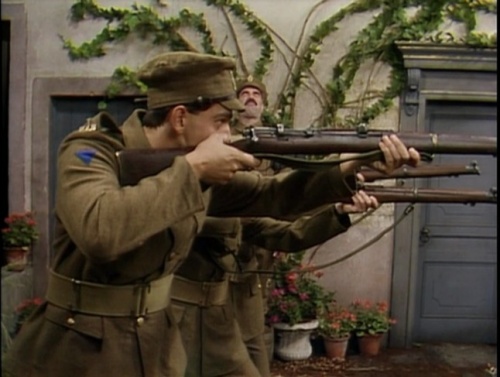 Blackadder's firing squad prepare to execute him in "Corporal Punishment." (Notice that the rifle is not cocked.) 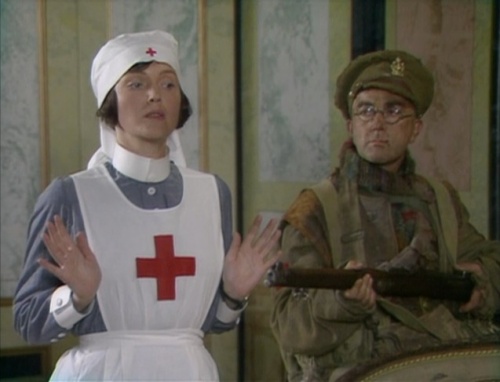 A Lewis Gun is mounted on a British biplane flown by Capt. Edmund Blackadder and Private Baldrick in the episode "Private Plane." The flying scenes use stock footage from the 1976 World War I film Aces High. 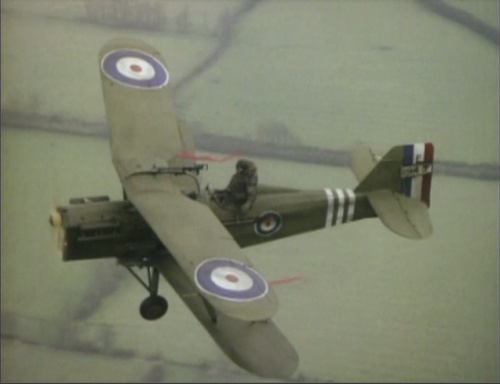 The Lewis gun is mounted above the wing on this Belgian Stampe SV.4.

A Maxim MG08/15 machine gun is seen mounted on the plane flown by the Red Baron Von Richthofen (Adrian Edmondson). Like Blackadder's plane, this is also stock footage from the film Aces High. 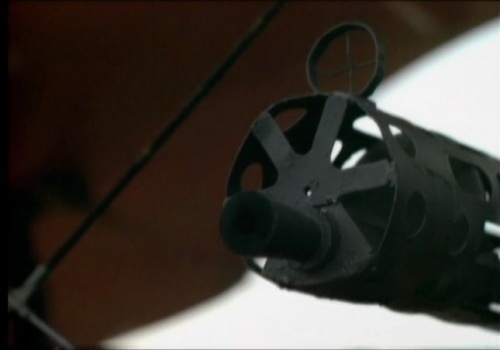 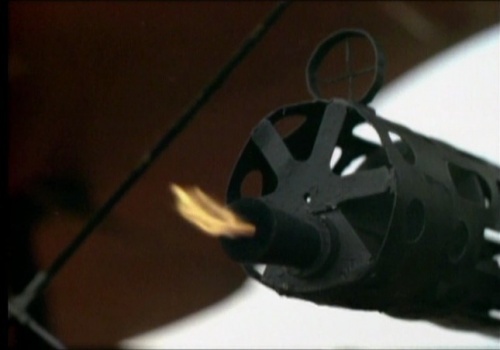 The Maxim appears to be a flame spewing prop rather than a real blank-firing machine gun.

A pair Mills Bomb hand grenades (referred to by General Melchett as "Pineapples") are part of a painting brushed by Captain Blackadder (Rowan Atkinson) in one of his numerous attempts to get out of the trenches. 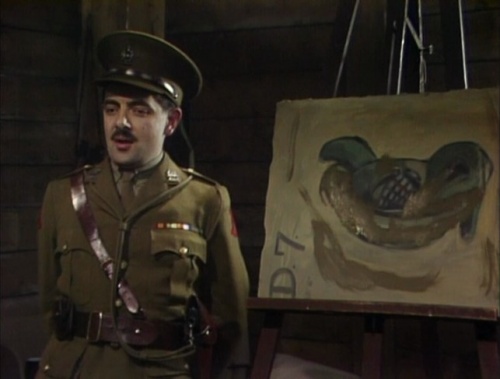 Blackadder's painting in "Captain Cook." He presents it as Lt. George's painting.
Retrieved from "https://www.imfdb.org/index.php?title=Blackadder_Goes_Forth&oldid=1316329"
Categories: