J.K. Simmons holds a SIG-Sauer P229 as Ray King in The Accountant. 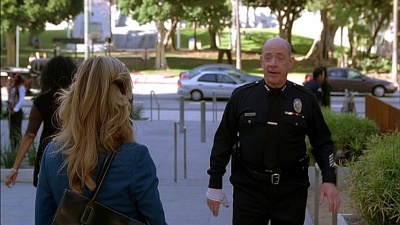 J.K. Simmons as Assistant Chief Will Pope in The Closer.

J.K. Simmons with a Colt Detective Special as Ted Slocum in The Mexican.

Jonathan Kimble "J.K." Simmons is an American actor well known to television audiences for his roles as Dr. Emil Skoda in the series Law & Order, Vern Schillinger on Oz, and as Chief Will Pope in the series The Closer as well as his role as J. Jonah Jameson in director Sam Raimi's Spider-Man film trilogy. In addition, he has appeared in such films as Thank You For Smoking, The Accountant, The Jackal and 2014's Whiplash, a film for which he received an Academy Award for Best Supporting Actor. He also appears in the Starz original series Counterpart.