The Heckler & Koch XM25 Individual Airburst Weapon System (also known as the Counter Defilade Target Engagement (CDTE), as part of some bizarre doctrinal shenanigans according to which it was not a grenade launcher) is a cancelled semiautomatic airbursting grenade launcher spun off from work on the grenade launcher module of the also-terminated Heckler & Koch XM29 Objective Individual Combat Weapon project, developed by Heckler & Koch and Alliant Techsystems (now Orbital ATK). Five pre-production models have undergone field testing in Afghanistan with the 101st Airborne Division who nicknamed it the "Punisher," and 36 more XM25s have been made since then.

Following a double-feed malfunction leading to an out-of-battery detonation during live-fire training in February 2013, the Army ordered all XM25s removed from the field for further testing. In June of the same year, the Senate Armed Services Committee recommended the 2014 budget eliminate funding for the 1,400 launchers intended to be purchased that year; this was misinterpreted by some as meaning the cancellation of the entire XM25 program, but the Army renewed its commitment to fielding the XM25 in August 2013. In September 2014 the main contractor, ATK, was awarded a $33.4 million contract to complete the weapon's engineering and manufacturing development (EMD) phase within the next two years, with the procurement phase delayed to 2017.

In late 2015 a new pre-production version was showcased, fitted with an improved, more compact fire control system with a 3x scope replacing the older 2x scope. In August 2016, the Defense Department Inspector General's Office issued a heavily-redacted report in which they recommended the Army "determine whether to proceed with or cancel the XM25 program after reviewing the results of the 2016 Governmental testing," which was scheduled to conclude in fall 2016.

Early mock-ups used a polymer body very reminiscent of the Heckler & Koch XM8, but more recent pre-production versions had a far more conventional appearance. The final version appeared to have gone to halfway between the mockups and the pre-production version, though it is not clear if the displayed weapon was a live XM25 or a mockup.

In early 2017 it emerged that Orbital ATK had filed a lawsuit against Heckler & Koch seeking damages of $27 million for failure to deliver 20 additional prototypes after Heckler & Koch claimed the weapon could potentially violate the St. Petersburg Declaration of 1868 banning explosive projectiles weighing less than 400 grams (despite that Germany is not a signatory of the St. Petersburg Declaration since at the time Germany did not exist, that the United States is not a signatory either, that the Declaration only applies to wars between the 20 signatory nations, and that the treaty specifically says that it does not apply to technology other than that which existed when it was written). It is not particularly clear why this was suddenly an issue when HK had been working on small airburst munitions with ATK for over twenty years. ATK claimed this had jeopardised the entire program, and also sought the transfer of intellectual property from Heckler & Koch, meaning they would not be the manufacturer of future XM25s. H&K ultimately settled out of court in July 2018, reportedly paying ATK $7.5 million.

On April 5th 2017, the US Army terminated its contract with Orbital ATK, citing the failure to deliver the 20 additional prototypes or offer any suitable replacement. On July 24th 2018 the Army signed a memorandum terminating the entire XM25 program as part of waste-cutting measures: their settlement with H&K and ATK for their failure to complete the contract means they also received all data and assets related to the program from both companies.

Heckler & Koch XM25 mock-up - 25x40mm. This is a non-firing demonstrator which looks substantially different to the final version. 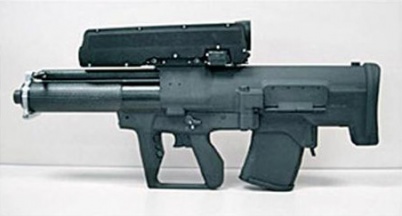 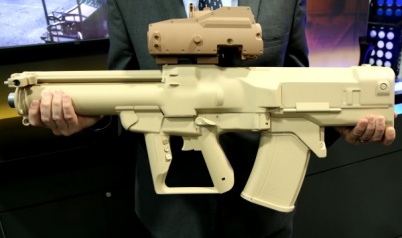 Capacity: 4/5-round detachable box magazine (recent prototype appears to use 5)

The Heckler & Koch XM25 can be seen in the following film and video games: