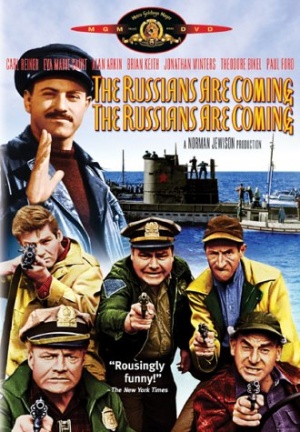 This is for the 1966 American comedy. For the East German drama with a similar name, see here.

Rozanov greets the Whittaker family with his Nagant drawn.

Rozanov with his Nagant revolver.

Rozanov waits for Whittaker inside his home.

Whittaker takes Rozanov's Nagant after he crashes the Volkswagen.

A Soviet petty officer with his Nagant 1895.

Mattocks re-holsters his Model 10 as he approaches the submarine captain.

Jonas and another man raise their Model 10s when the submarine captain threatens to shoot up the town.

Many of the Russians carry the PPSh-41 submachine gun, each with a box magazine. Although several of the Russians, such as Alexei Kolchin (John Phillip Law) and Lt. Rozanov (Alan Arkin), handle the PPSh, only Walt Whittaker (Carl Reiner) fires it when Rozanov drives towards him in a stolen black Volkswagen. Whittaker erroneously refers to the weapon as a "Tommy gun".

Kolchin guards the Whittaker family as Rozanov leaves the home.

Whittaker and Kolchin fight over the submachine gun.

Rozanov takes the PPSh from one of his men.

Elspeth (Eva Marie Saint) holds the submachine gun as Whittaker heads out on the bicycle.

One of Rozanov's men aims the PPSh at Whittaker.

Whittaker approaches Rozanov's Volkswagen after firing at it.

In addition to the PPSh-41, several of the Russians carry Madsen M50 submachine guns.

A Russian with a Madsen approaches Muriel Everett.

A Russian with a Madsen watches Rozanov talk to Whittaker.

The Russians, disguised as civilians, fire their Madsens and PPShs into the air as a diversion.

A Russian sailor aims his Madsen at the townspeople.

Several of the townspeople carry side-by-side double-barreled shotguns. Walt Whittaker (Carl Reiner) also uses one when searching for Rozanov at his home.

A man stands behind Fendall Hawkins (Paul Ford) with a shotgun.

A man on the far left holds a shotgun as Fendall lines up his vigilantes.

A man next to Norman Jonas aims his shotgun at the Russian submarine captain (Theodore Bikel).

Townspeople aim at the submarine.

Several townspeople also use Winchester Model 1897 during the Russian "invasion".

A man aims his Winchester at the Russian submarine captain.

A fireman aims his Winchester M1912.

Several townspeople carry M1 Garand rifles when responding to the news of the Russians in Gloucester.

A man over Fendall's right shoulder aims his M1 Garand.

A man behind Stanley (Michael J. Pollard) stands with an M1 Garand.

The man on the right aims an M1 Garand at the submarine captain.

Another man aims an M1 at the submarine captain.

A man to Fendall's left holds a Garand.

Some of the Gloucester townspeople have Kentucky Flintlock Rifles.

A man runs with the crowd with his Kentucky rifle.

The townspeople line up, with a man in the front aiming a Kentucky rifle.

Many of the townspeople in Gloucester have Winchester Model 1892 rifles when responding to the Russian "invasion".

A man over Fendall's left shoulder has a Winchester.

Some of the townspeople carry Mosin Nagant Rifles.

Behind Mattocks and Rozanov, a man holds a Mosin-Nagant M91/30 bolt-action rifle.

A townsperson (in the green flannel) holds a Mosin-Nagant M1891.

Some of the Gloucester townspeople have Pump Action Rifles.

Some of the Gloucester townspeople have M1 Carbines.

The townsperson on the left holds the M1 Carbine.

For some reason, the Russians have a Browning M2 aircraft mounted.

The Russians aim at the townspeople.

The Russian submarine captain (Theodore Bikel) orders his men to aim a deck gun at the townspeople. This is likely a mockup.

The Russian gunmen lower the gun.