Sherlock Holmes (usually assisted by his trusty sidekick Dr. John Watson) is an famous character created by Sir Arthur Conan Doyle, who appears not only in many novels and short stories by Conan-Doyle himself, but also in many different homages, spin-offs and stand-alone works because all of the original works of Conan Doyle featuring the character fell into public domain (which even makes possible not giving any credit for Conan-Doyle). Sherlock Holmes is generally considered as one of the most important staples of mystery genre (if not the most important). He is also often considered one of the first modern superhero archetype predecessors. 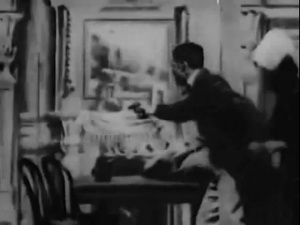 Sherlock Holmes Baffled - a 1900 comedy movie which was the very first adaption (and use of character in other media then literature) of Sherlock Holmes, starring unknown actor and featuring no Watson (as well as any other Holmes supporting characters). It is basically covered on this page because it is a short and because it only has one gun.

That was deleted from a disambiguation page because admin Funkychinaman thinks there's no place for it. I wonder what are the opinions of other admins and users, though, becuase I think, in case when character used a firearm even in his very first cinematic appearance in freaking 1900 (which is also, most likely a very first appearance of FN Model 1900 (in movement it looks much more familiar, then on the screenshot), I think, it SHOULD be on the actual Sherlock Holmes page. --Kloga (talk) 22:22, 3 January 2014 (EST)

You are skirting on VERY thin ice here. Not only does the film not have a page here, it's impossible to make an ID based on the screenshot provided. We are not the Sherlock Holmes wiki, no matter how badly you want it to be. --Funkychinaman (talk) 22:29, 3 January 2014 (EST)

Well, you wanted oppinions from other admins so here is one. I 100% agree with FCM, Sherlock Holmes Baffled does not belong here. Not only is the weapon totally unidentifiable, it is from a 30 second mutoscope reel so is not eligible for inclusion anyway. Furthermore, I do not think this whole page is necessary as it is not a disambiguation page. A disambiguation page is where several things (media or weapons) have an identical or similar name so a page is needed to differentiate them for search purposes, such as the Defiance page for example. There is only one thing with the title Sherlock Holmes so a disambiguation pages isn't needed in my oppinion. As for you feeling that you are getting an undue ammount of scrutiny, it is because you keep doing really random borderline or ineligible things. There is no shortage of more conventional things you could be doing, so why you feel the need to be consistently bending or breaking the standards on the site is beyond me. Lastly, if an admin has told you that something is ineligible or doesn't belong, don't try and weasel around it by asking for other admins to overrule it. --commando552 (talk) 05:48, 4 January 2014 (EST)

Listed on this page are numerous works of fiction based and/or including a character of Sherlock Holmes or supporting characters like Watson, Holmes arch-enemy Professor Moriarty, Police Inspectors Lestrade and Gregson and a landlord Mrs. Hudson. 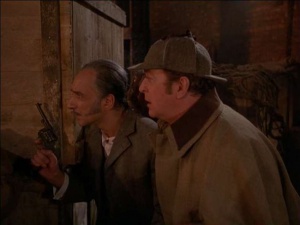 Dr. Watson with MAS 1873 revolver as he and Sherlock Holmes (Michael Caine) hide behind some crates in Without a Clue (1988). 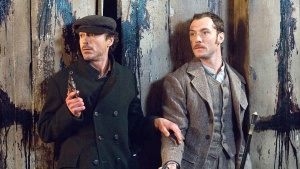 Holmes (Robert Downey Jr.) and Watson (Jude Law) with their Webley Bulldog Revolvers as featured in a promotional still of Sherlock Holmes (2009).

Watson (Jude Law) with the Sharps Model 1A Pepperbox as he and Holmes take cover in Sherlock Holmes: A Game of Shadows (2011). 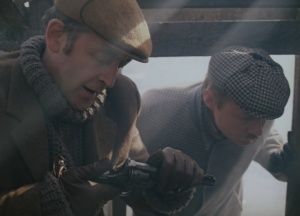 Sherlock Holmes (Vasily Livanov) cocks his anachronistic Webley Mk VI standing near Dr. Watson (Vitaly Solomin) in The Hound of the Baskervilles (1983) episode of The Adventures of Sherlock Holmes and Dr. Watson. 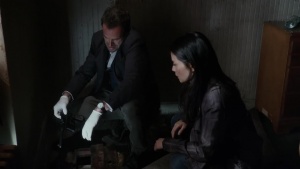 Holmes (Jonny Lee Miller) and Watson (Lucy Liu) secure the Mauser C96 in the episode "One Way to Get Off" in Elementary (2012).
Retrieved from "http://www.imfdb.org/index.php?title=Talk:Sherlock_Holmes_(disambiguation)&oldid=789676"