Martin Freeman with a Heckler & Koch USP as Hector Dixon in Wild Target. 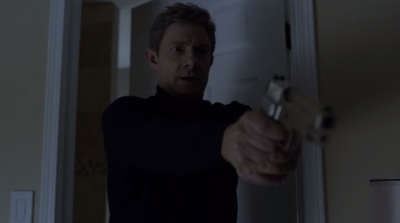 Martin Freeman is a British actor well known to film audiences for his role as the young Bilbo Baggins in The Hobbit trilogy of films. He also has appeared as Dr. John Watson in the BBC series Sherlock, Lester in Season 1 of the Fargo television series adaptation in addition to his role as Everett Ross in the MCU.