The cover also shows him with the extended slide release. Is this another mistake? I think MPM might have got his tags mixed up again. - Gunmaster45

MT2008 fixed my tags. After the first upload I haven't touched the Beretta descriptions. Instead yielding to those with better eyes than I have... So please talk to MT2008 MoviePropMaster2008 23:04, 16 February 2009 (UTC)

I'm pretty sure the gun used to pistol whip Smitty isnt real; the screw on the grip is in the wrong place and theres no red dot on the safety lever. Stephenf1234 01:13, 25 December 2010 (UTC) 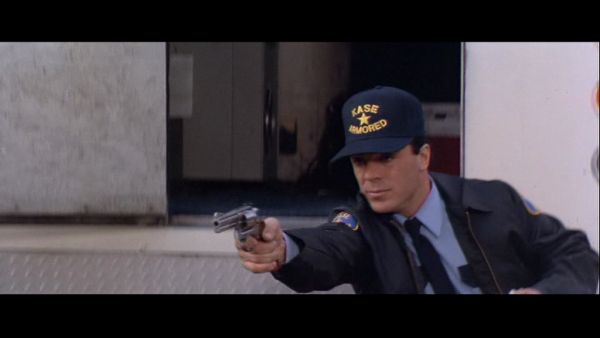 The thief shoots the real armoured car driver in the leg with his revlover.

- Regardless of what the upload page says, the Main Rules page clearly states to load screenshot pictures in .JPG format -

Screenshots should be in the JPEG format and in a reasonable size. GIFs don't re-size well and they are non-compressed. PNGs are a problem because they are huge files. Please make sure your screenshot uploads are JPGs only, lest they be downloaded, converted to JPG and uploaded by someone else. It's all about file size and not overtaxing the servers.

Reading this article got me to thinking again about Armor Piercing 9mm rounds. I'm guessing they're talking about the 7N31 or 7N21 rounds developed in Russia. You can read about it here http://world.guns.ru/smg/smg61-e.htm. Are there any military forces that use this type of ammunition, or is it still in the trial phase, or nobody just uses it? Also, even though yes, it is a 9mm, would it work in any 9mm gun or is there any type of special modifications needed to use the round? Thoughts? --Gunkatas 20:28, 16 October 2009 (UTC)

Armor-piercing 9x19mm ammunition is used by defense agencies to test armor for effectiveness. The 7N21 rounds are over-pressure rounds combining the 9x19mm Parabellum case dimensions with the bullet design of the 9x21mm Gyurza ammunition; a high-pressure load combined with a tempered-steel core bullet. It is the standard ammunition used in the Yarygin PYa, MR-443 Grach which is the Russian military sidearm. The Gyurza was designed for use in the SR-2 Veresk, a Russian compact SMG which I believe was developed for special operations and police use. Atypicaloracle

These aren't the same gun. You can clearly see on the slide that the first gun has slots in the slide for the safety whereas the second, when Riggs is demonstrating the armor-piercing ammo, is smooth across. However, in some of the later scenes it seems to switch back.

The 92F has a slot for the safety/decocker only on the left side, the right side is smooth on all of them.

Picture 3 in the 92FS section

In the picture where Mel Gibson is holding a Beretta and his badge, that is most certainly not his normal Beretta. It's definitely a Inox model. Acora 07:24, 7 July 2010 (UTC)

- No way. The end of the gun in that screencap is clearly not stainless. The daylight hitting the rest of the gun makes it look a bit brighter on that particular picture, but it's still his regular Beretta, and not a stainless Inox - It has the proper blued-steel 'black' look in alternate angles during that same sequence. StanTheMan 17:24, 7 July 2010 (UTC)

If you say so. I haven't seen this movie in a while, so I really don't remember it in that much detail. But I see what you're talking about, so it's quite possible that I'm just mistaken. Thanks for clearing that up. Acora 02:24, 19 July 2010 (UTC)

- The 629 and 686 are the stainless versions of the blue-steel 29 and 586 respectively, yes. However, that is not the case here. More lighting tricks I'm afraid. Seems to be common on this film (or at least, on the the screenshots for this page). Both revolvers Travis uses are blue-steel guns, and not stainless. On the pictures of the 29, the light gives it a shine that makes it appear stainless. But the gun is certainly a regular Model 29 - It's more obviously shown as a 'black' blue-steel gun throughout the rest of the film..

Murphy gives up his Smith & Wesson Model 60 to Travis. Note the stainless Model 60 has the strong 'silver' color of a stainless gun, whereas the blue-steel 586 Travis uses does not.

Lorna's Quote on the 'Mac 10' can it be added to the quotes on the main page?

Does anyone else think that this might actually be a 5903 rather than a 5906? In the first picture in particular there appears to be a distinct different in the colour of the frame and the slide just like on the alloy framed 5903. Also, although the image we have has the later rounded trigger guard there were early models of the gun with the hooked one just like the 5906. --commando552 05:20, 4 September 2012 (CDT)

I have to say that I agree with you. There seems to be a slight difference in frame and slide on the other pictures as well, though its considerably harder to tell. Still, I concur, I also think it may be a 5903. Why its there and not the 5906 would be another story.. Of course, its certainly possible they didn't have the 5906 (Though I don't see why they wouldn't just keep using the 5906 from the 2nd film). A better possibility is that perhaps they changed it to a newer gun in the series, much like they changed from a 92F to a 92FS for Gibson/Riggs. StanTheMan (talk) 21:43, 17 December 2013 (EST)

Murtaugh takes out his S&W 5906 before going on patrol.

I always find it funny how these so called 'armor-piercing bullets' seem to change in power throughout the film. The 9mm bullets that weren't powerful enough to make it through the armored car windshield can punch through a loader bucket by the end of the film, and of course two vests supposedly stopping a .44 Mag of one of those when a 9mm one punched clean through a single vest. Of course its just a silly oversight in a cheeser buddy-cop action flick but hey, always noticed it - it half irks me and half amuses me, heh. StanTheMan (talk) 21:50, 17 December 2013 (EST)

Surprised none of the discussions, much less the page itself, makes mention of the KTW ammunition.

Super interesting ammunition, but mostly: it is all but in the movie. This article provides a bit of an overview, history of the scare over them, and photos/screenshots of the movie prop ammo boxes, as compared to the real KTW rounds. https://www.thetruthaboutguns.com/the-fear-of-teflon-coated-ammunition-the-story-ktw-winchester-and-hollywood/

Seems worth including, but I leave that to someone who is a more regular contributor to do, or discuss, as I am not clear on the guidelines for odd stuff like ammunition, or the limits of discussing the reality vs. the in-movie use of something like this. Shoobe01 (talk) 00:32, 5 July 2019 (EDT)