Remember This Day (Zapomnim etot den) is a Soviet 1968 (filmed 1967) B&W historical movie directed by Vladimir Korsh-Sablin. The story is set in Autumn 1917, during the Russian revolution. A grenadier regiment of Russian Army is positioned on the frontline. Pvt. Pyotr Komlyuk (Yuriy Puzyryov), elected by soldiers as regiment commander, and other Bolsheviks lead the regiment in revolutionary events.

The following weapons were used in the film Remember This Day (Zapomnim etot den):

The grip of revolver is seen in Komlyuk's holster.

A Cossack officers disarms Komlyuk when the latter is arrested.

Most Russian soldiers are armed with Mosin Nagant M1891 rifles.

A good view of bayonets.

Russian soldiers under German chemical attack. They wear primitive respirator masks that were in reality out of use in 1917 as Russian troops were supplied with Zelinsky gas masks in large numbers.

Anachronistic Mosin Nagant M1938 Carbines are used instead of correct M1907s. They are mostly used by Cossacks.

A Cossack (at the left) on guard with M38 Carbine.

A Maxim in trenches.

Maxims are mounted in turrers of Austin armoured cars (the vehicles are modern replicas).

A soldier in first row carries a grenade.

A soldier at the background carries a grenade.

German officers carry holsters for Luger P08 pistols but they look rather flat and empty.

An officer with Luger holster on belt leads his soldiers.

An officer in center carries a Luger holster.

German troops use chemical weapons. Their equipment are gas cylinders, carried by soldiers. The props are possibly based on some common cylinders, like scuba tanks.

Gun carriage of M1902 gun is used to transport a coffin during the honor funeral. 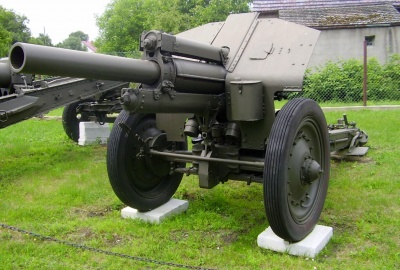 Russian artillery in action. M-30 howitzers are seen at the background.