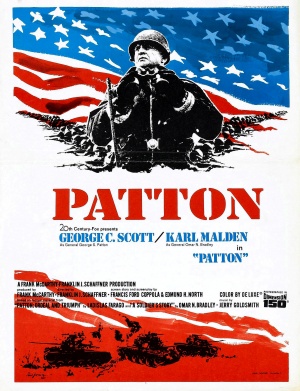 Patton (released as Patton: Lust for Glory in the UK) is a 1970 biographical war film starring George C. Scott as the legendary US Army General George S. Patton, who led the US 3rd Army through notable campaigns in the European theater during World War II. The film was directed by Franklin J. Schaffner (Planet of the Apes) from a script co-written by Francis Ford Coppola, based on the biography Patton: Ordeal and Triumph by Ladislas Farago and Omar Bradley's memoir, A Soldier's Story. The cast includes Karl Malden as General Omar Bradley. Patton would gain numerous accolades following its release, including Academy Awards for Best Picture and Best Actor for Scott. The film was filmed principally in Spain, utilizing the military assets of the Spanish Army.

The following weapons were used in the film Patton:

True to his real life counterpart, General George S. Patton (George C. Scott) in the film carries an ivory-gripped Single Action Army in his holster with his initials "GSP" engraved on the grip. When a reporter asks him about his "pearl-handled revolvers", Patton quickly retorts "They're ivory. Only a pimp from a cheap New Orleans whorehouse would carry a pearl-handled pistol." 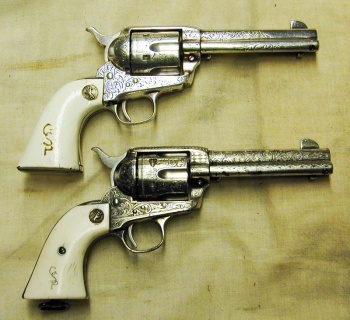 Two custom Single Action Army revolvers with engraved ivory grips - .45 Long Colt. The bottom is the 'hero gun' from the film, while the top is the actual SAA carried by Patton. Photograph courtesy of the Patton Museum of Cavalry and Armor, Fort Knox, KY.

As Patton walks through the HQ, the Single Action Army in visible in his right holster while the S&W .357 Mag is holstered on the left.

Patton's SAA is visible in the holster as he greets Gen. Omar Bradley (Karl Malden).

Patton's holster with a revolver and extra .45 rounds.

Patton pulls his revolver to clear some mules that were blocking the armored column.

Patton (George C. Scott) watches the Third Army's advancement as he stands with his Single Action Army in his holster.

Patton talks to his staff with his SAA holstered.

Patton's signature ivory-handled SAA is replaced by a Smith & Wesson Registered Magnum with his "GSP" initials engraved on it for the shot during his opening speech. It is otherwise seen at points in the film being carried in combination with his Colt SAA revolver. General Patton purchased the Smith & Wesson 'Registered Magnum' (known later as the Model 27) in 1935 directly from Smith & Wesson. He had the nickname "Two Guns" as he wore matching Colt SAA that he had until giving one away as a gift. He then wore that Smith & Wesson in place of the one given away. He also wore Colt 1908 Hammerless Pistol and a Remington Model 51 pistol. 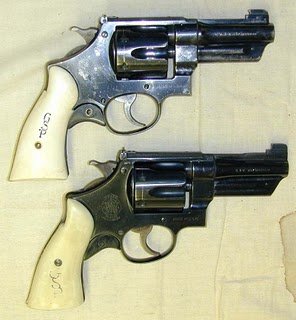 Two custom Smith & Wesson Registered Magnums with engraved ivory grips - .357 Magnum. The bottom is the 'hero gun' from the film, while the top is the actual S&W Registered Magnum carried by Patton. Photograph courtesy of the Patton Museum of Cavalry and Armor, Fort Knox, KY.

As Patton walks through the HQ, the SAA in visible in his right holster while the S&W .357 Mag is holstered on the left.

Patton answers the phone with his Colt Hammerless tucked into his waistband.

Patton fires at a German plane, daring it to shoot him in the nose.

Patton aims the pistol at the German plane.

Patton packs his pistol in his waistband.

American soldiers and officers, including Gen. Omar Bradley (Karl Malden), carry the M1911 on their holsters, some of which are shoulder holsters.

Gen. Omar Bradley (Karl Malden) argues with Patton with an M1911 in his holster.

The M1928A1 Thompson is primarily carried by the staff officers of both Gen. Patton and Gen. Bradley, but is also seen in the hands of US soldiers.

A captain riding with Gen. Bradley through North Africa fires a Thompson at vultures feeding on dead GI's.

The sergeant armed with a Thompson is seen behind Capt. Jensen (Morgan Paull) when Patton's forces engage Rommel's army.

Lieutenant Colonel Codman (Paul Stevens) carries a Thompson slung over his back as they parade through the streets of Palermo, Sicily.

One of Patton's men fires a Thompson M1928A1 during urban warfare with the Germans.

Some of the Moroccan troops that line up for Patton carry MAT-49 submachine guns. These are anachronistic for the scene, which takes place in 1943, as they weren't developed until a few years later. Likely intended as a stand-in for the period-correct but difficult to acquire MAS-38.

Moroccans stand in a line with their MAT-49s.

Many German soldiers carry the Spanish Star Z45 submachine gun, (with a MP40 barrel attached), as a stand-in for the genuine German MP40 in some scenes.

German soldiers stand at Rommel's HQ with the Star Z45 (fitted with MP40 barrels to pass as MP40s).

During the scenes in France there seem to be genuine MP40s in use.

A German fires an MP40 just before he is killed.

Gen. Bradley drops his Springfield as he takes cover from a German strafing run.

A dead German with his Mauser with a dead American (holding a Garand off-screen) as a wounded soldier explains the desperate hand-to-hand combat to Patton. Note the straight bolt.

One of the Germans preparing the avalanche the Third Army's tanks holds a Mauser M43.

Bradley gets a helmet from another soldier as he holds his M1 Carbine.

The British troops carry Lee-Enfield No. 4 Mk I rifles.

A British troop at Monty's camp stands with his Lee-Enfield.

The Moroccan troops that march for Patton carry MAS-36 rifles.

Many of the American soldiers carry M1 Garand rifles.

A soldier sitting on the tank holds his M1 Garand.

Some of Patton's Third Army argues in the mud while holding M1 Garands.

Americans lay dead with their M1s near them, just before a German tank obliterates one.

One of Patton's men fires his Garand during urban warfare with the Germans.

An en bloc clip is ejected from an M1 Garand.

When US Army soldiers are seen arguing at a congested intersection, one of the soldiers appears to carry at first glance an M1 Carbine. Upon closer inspection, the rifle's magazine appears to be too big to be for the carbine. It's been surmised that this rifle is in reality a Beretta BM59, a rifle not introduced until the 1950's.

The soldier on the far left carries on his shoulder what appears to be a Beretta BM59.

Patton himself holds onto the barrel of a Browning M2 Aircraft heavy machine gun while riding atop a half-track on his way to his new headquarters in North Africa. Several tanks are seen fitted with these as well.

Browning M2 Aircraft, Flexible - .50 BMG. This variant of the Browning M2 developed for aircraft is used heavily in the film industry due to the ease of blank adapting the aircraft version.

Patton stands atop a half-track with his hand on the barrel of an Browning M2 Aircraft.

Patton looks around the city as he is driven to headquarters, grasping the barrel of an M2 Aircraft.

Tank commanders fire Browning M2 Aircraft MG's from their M41 Walker Bulldogs (standing in for M4 Shermans) as German bombers strafe the Patton's HQ. This tank was not in service during World War II.

The American tank commander (Clint Ritchie) prepares to use the M2HB.

Patton rides on a tank with an M2HB.

Patton's army marches through the snow with an M2HB.

A Browning M1919A4 machine gun is seen at the bottom mounted on an M2 tripod used by American troops during Patton's first engagement with Rommel's forces.

The Browning Automatic Rifle is briefly seen carried by US troops during Patton's first engagement with Rommel's forces. Judging by the placement of the bipod, it's possible the weapon is a FN BAR Type D.

On the bottom right, an American solder is seen with a BAR. Judging by the placement of the bipod, it's possible the weapon is a FN BAR Type D.

What appears to be an M20 "Super Bazooka" is used by Patton's troops (Like the American tanks in the film, the M20 would not be correct for the time period).

An American soldier uses the bazooka on a German position.

During the winter offensive, a German soldier is briefly seen carrying the Panzerfaust.

The German soldier on the far left is briefly seen carrying the Panzerfaust.

A German soldier uses a Flamethower to take out an American half-track during the Battle of the Bulge.

A German soldier uses the flamethrower.

The tanks used in the film to represent German armor are in reality anachronistic US made M48's, also known as the "Patton". These were likely on loan from the Spanish Army, who provided a variety of military equipment for the film. These tanks were painted in desert camouflage with German markings for the production. The tanks also were briefly seen as American armor as well.

The tanks used in the film to represent German armor are in reality anachronistic US made M48's, also known as the "Patton".

US tanks during the first engagement with the Germans. Note the camouflage laid on the turrets and the muzzle brakes removed to disguise its appearance.

The majority of the US tanks seen in the film are in reality anachronistic M41 Walker Bulldogs.

Tank commanders fire Browning M2 Aircraft MG's from their M41 Walker Bulldogs as German bombers strafe the Patton's HQ. The M41 was not in service during World War II.