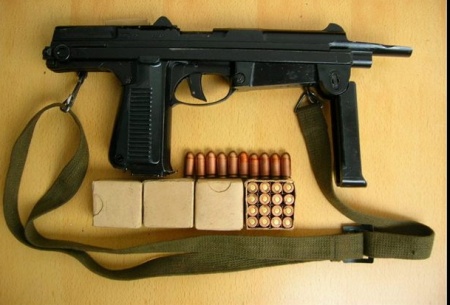 The PM-63 (Polish: Pistolet maszynowy wz. 1963, lit. "submachine gun model 1963"), nicknamed RAK (Polish: Ręczny Automat Komandosów, lit. "Handheld Commando Automatic"), is a Polish submachine gun. The gun was produced by the Łucznik Arms Factory in Radom, Poland, and chambered in 9mm Makarov. It was used extensively by Polish Special Ops units and Airborne units as well as special police divisions during the Cold War. It was well known amongst gun scholars, due to being one of the few actual submachine guns being issued behind the iron curtain in the post-war period (between the late 1940s and early 1970s).