From Internet Movie Firearms Database - Guns in Movies, TV and Video Games
(Redirected from The Package (2013))
Jump to: navigation, search 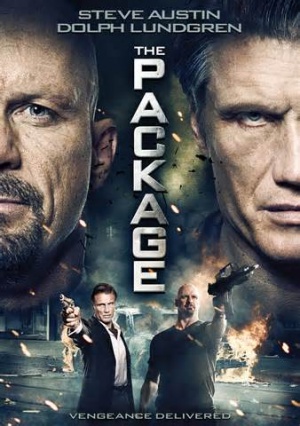 The Package is a 2013 DTV action film directed by Jesse V. Johnson and starring Steve Austin as Tommy Wick, an enforcer who is tasked with the job to transport a package to man known as "The German" (Dolph Lundgren). As rivals attempt to steal the package, Tommy discovers the true nature of his transport.

The following weapons were used in the film The Package (2013):

One of Luis's (Patrick Sabongui) men pulls a nickle-plated 1911 variant before being quickly disarmed by Tommy (Steve Austin). 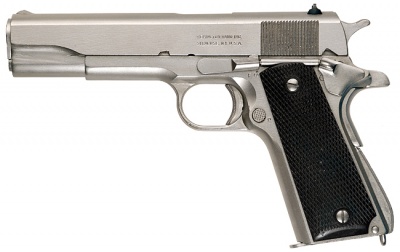 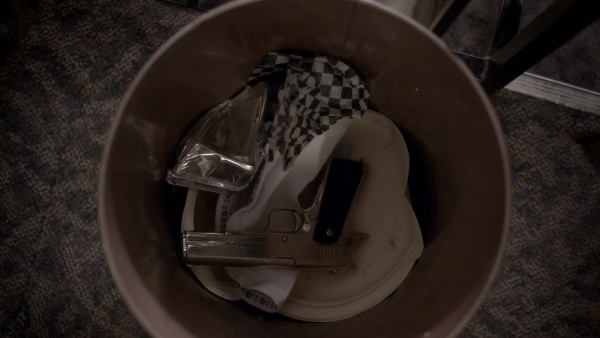 The 1911 being tossed into the trash can after Tommy disarmed it from the original owner.

Carl (Jerry Trimble ) pulls out a Walther PPK/S but puts it away opting to use his martial art skills instead. 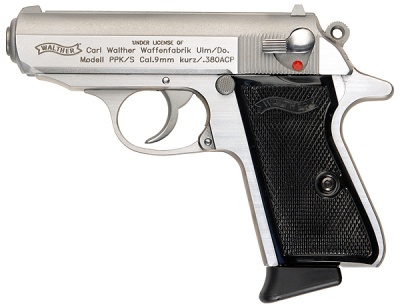 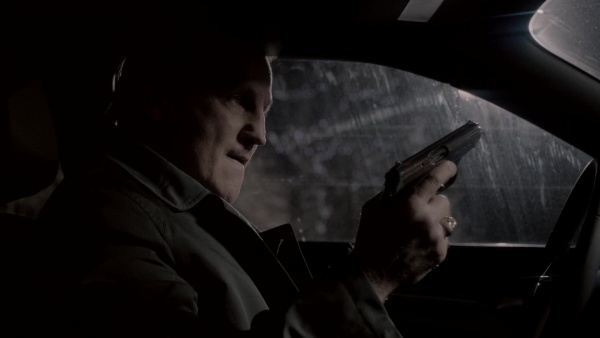 Carl (Jerry Trimble ) contemplating whether or not to use his Walther PPK/S.

Devon's (Darren Shahlavi) team of ex-military contractors can be seen equipped with drop leg holsters with an unknown handgun inside. The fact that they never draw their handguns along with no clear shot makes it near impossible to give a positive ID. In fact, it could be a rubber gun being used as a holster stuffer. 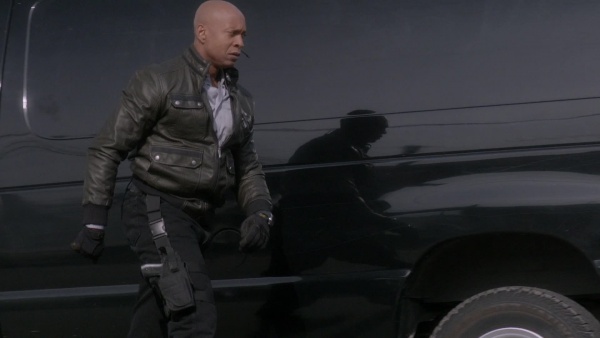 Probably the best shot in the entire movie. Based on the grip, it could be a Sig. However, as mentioned above, they never draw their handguns therefore making a solid ID impossible.

A suppressed Heckler & Koch Mark 23 is used by "The German" (Dolph Lundgren) after he confiscates it from a hitman sent to kill him at his house. 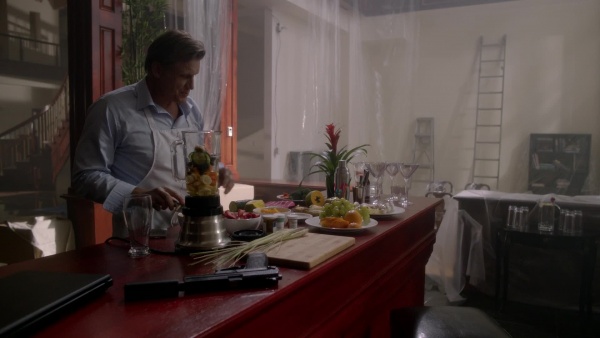 The suppressed Heckler & Koch Mark 23 sits near "The German" (Dolph Lundgren) as he preps to make a smoothie.

A Colt M16A2 can be seen slung on the shoulder of a Farragut County Jail officer. 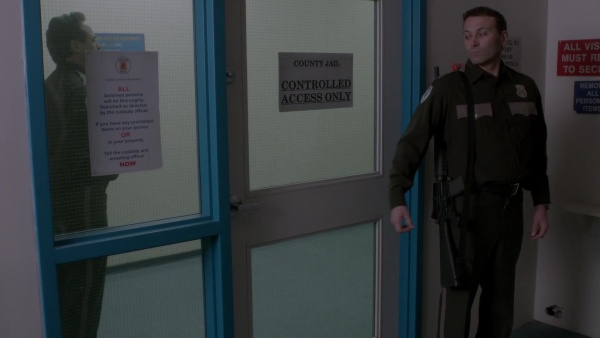 The Colt M16A2 seen slung on the shoulder of the country jail guard.

The majority of Devon's (Darren Shahlavi) team of ex-military contractors can be seen equipped with the SIG SG 552. They are sometimes equipped with EOTech Holographic sights and foregrips. Tommy (Steve Austin) can be seen using the rifles throughout the movie. Ralph (Peter Bryant) can be seen one with the stock removed. 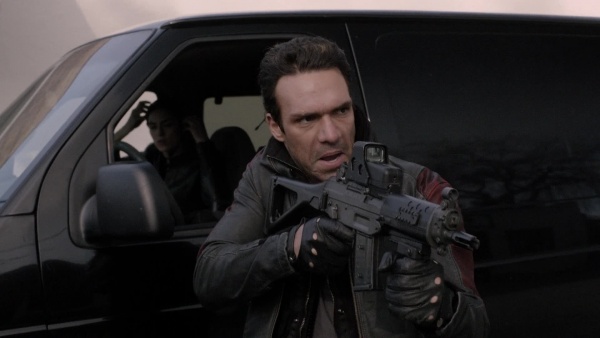 Devon (Darren Shahlavi) with the SIG SG 552 as he searches for Tommy (Steve Austin). Note the EOTech sight and foregrip. 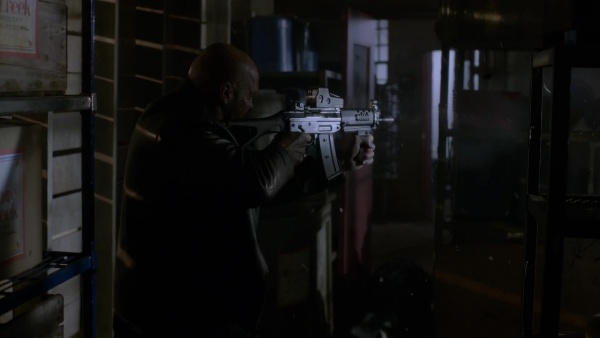 Tommy (Steve Austin) with the (SIG SG 552) that he took from one of Devon's (Darren Shahlavi) men.

"The German's" (Dolph Lundgren) men along with himself are armed with the Heckler & Koch G36K. Tommy (Steve Austin) can also be seen dual wielding them during the final shootout. Some of the G36s can be seen with ZF 3x4° dual optical sights equipped whereas others simply have the export optical sight. 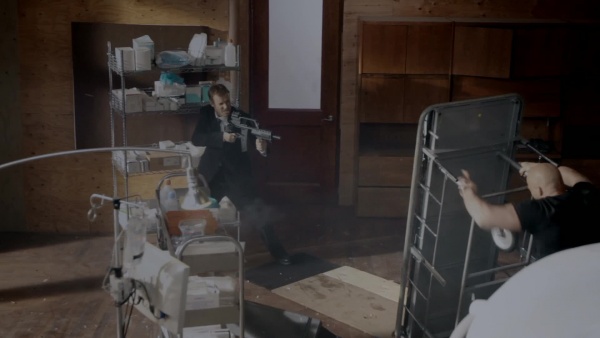 A henchmen firing his Heckler & Koch G36K as Tommy (Steve Austin) ducks behind a gurney. 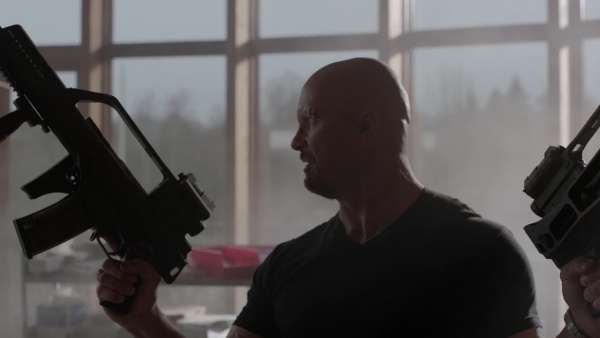 Tommy (Steve Austin) dual wielding the Heckler & Koch G36K. Note the dual optical sights, also due to continuity errors, they will switch with rifles fitted with the export sight. 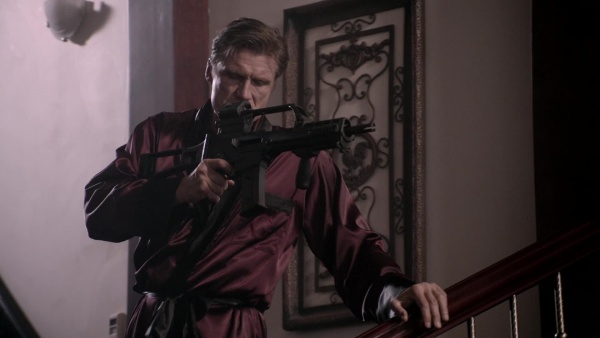 Nothing says classy like a silk bathrobe and a HK. Note the dual optical sights and foregrip. As with Tommy's rifles, his will switch to one without the foregrip and dual sight in a continuity error.

A PM-63 RAK used by one of Nicholas's (John Novak) men who is quickly disarmed by "The German" (Dolph Lundgren) and uses it to return fire. 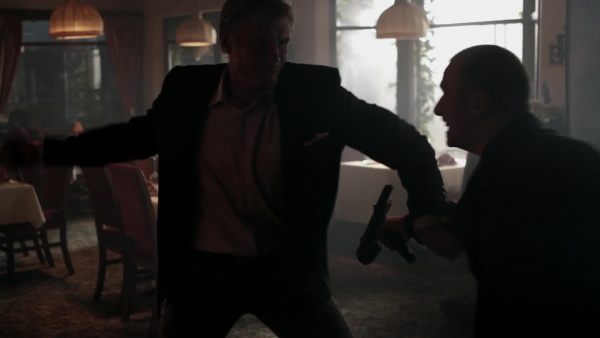 The henchman is relived of his PM-63. 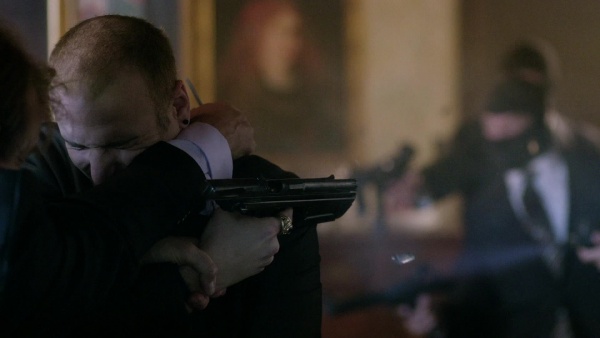 "The German" (Dolph Lundgren) returning fire with a PM-63.

Rather fitting for a mobster movie, a M1928 Thompson with the stock removed can be seen in the hands of Nicholas's (John Novak) men. "The German" (Dolph Lundgren) also uses the SMG during the shootout. 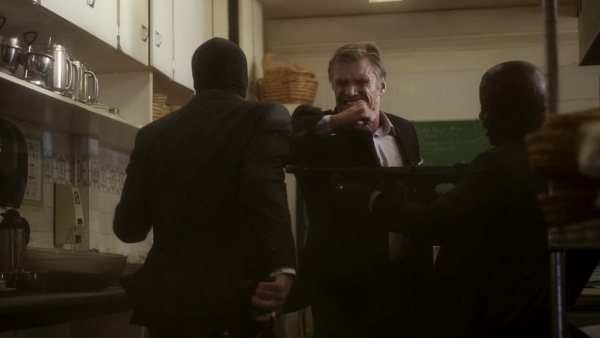 The henchman attempting to swing this M1928 Thompson around as "The German" (Dolph Lundgren) does a surprise attack from behind. 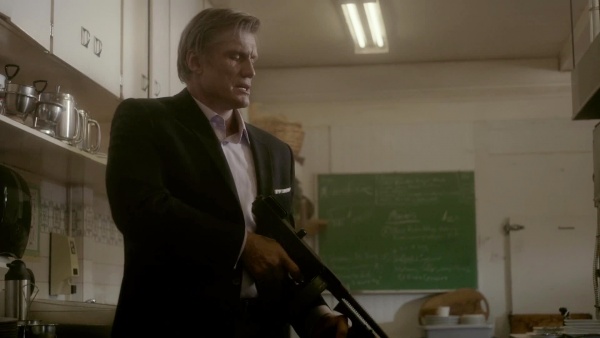 "The German" (Dolph Lundgren) with the M1928 Thompson. Note the removed stock.

A Sterling SMG can be seen in the hands of a masked henchmen during the restaurant shootout. 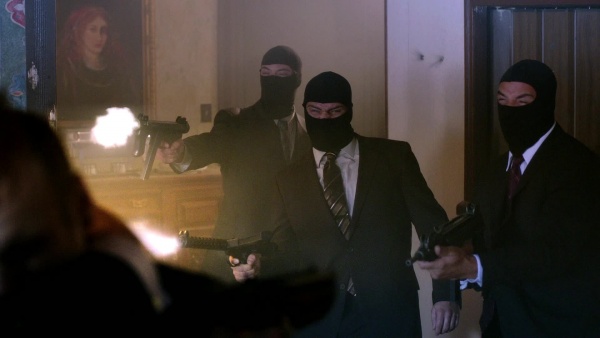 The henchmen in the middle firing his Sterling SMG into "The German's" (Dolph Lundgren) meat-shield.

A Beretta PM12S can also be seen in the hands of some of the masked henchmen during the restaurant shootout.

The Beretta PM12S can be see in hands of the henchmen on the left.

A Uzi are among the various weapons carried by Nicholas's (John Novak) men during the restaurant shootout. A suppressed version can later been seen in the hands of a hitman.

The henchmen on the right can be seen firing his Uzi at "The German" (Dolph Lundgren). 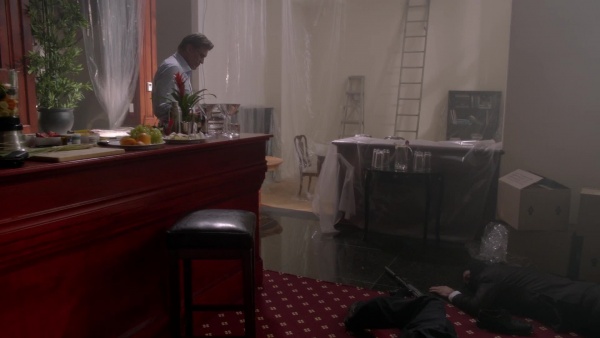 The suppressed Uzi lying next to the dead hitman.

A Heckler & Koch MP5SD can be seen lying next to a dead hitman. As it is only seen for a few seconds, it is difficult to determine which SD variant it is. 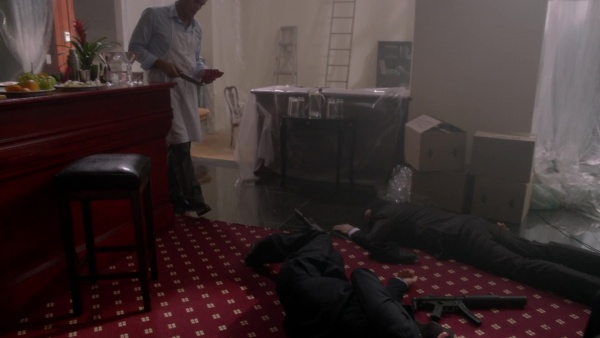 The Heckler & Koch MP5SD can be seen lying next to the dead hitman.

One of Anthony's (Michael Daingerfield) men pulls out a possibly nickle (maybe gold?) plated Heckler & Koch MP5A3 with the stock removed during the power-plant confrontation. Monique (Monique Ganderton) can also be using the same MP5. 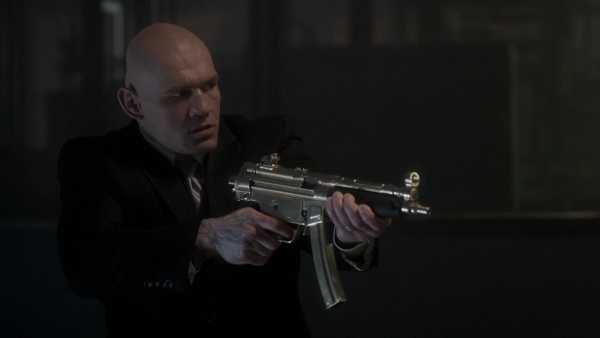 The henchman holds his nickle (maybe gold?) plated Heckler & Koch MP5A3 after drawing it from his suit. Note the removed stock.

Ralph (Peter Bryant) pulls out a M240B out of the back of the van during the shootout at the warehouse. 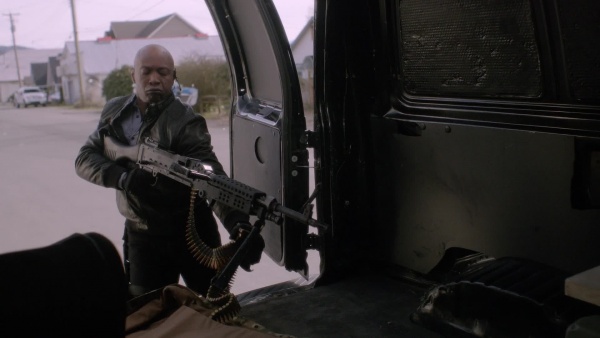 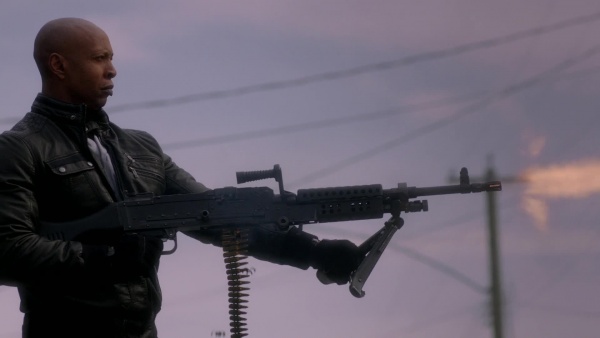 What could possibly be a Heckler & Koch MSG90 can be seen in the hands of Ralph (Peter Bryant). However, there is never a clear shot that shows the entire rifle making a positive ID difficult. 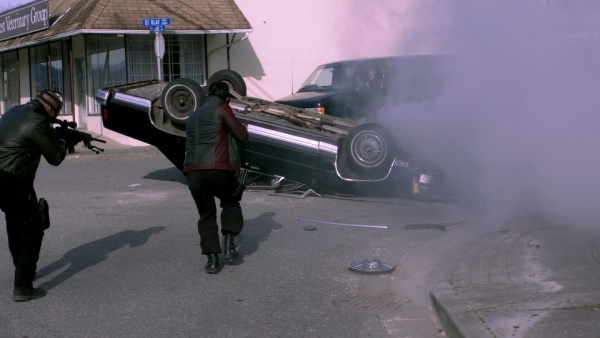 The bowling alley's owner pulls what appears to be a Remington 870 with sawed off stock and barrel on Luis (Patrick Sabongui) as he tries to run from Tommy (Steve Austin). 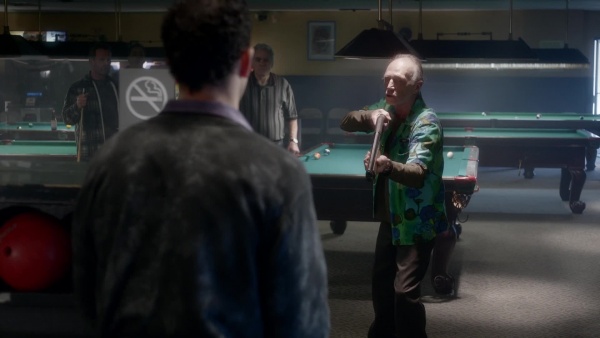 The bowling alley owner with the sawed off pump action shotgun.

Tommy (Steve Austin) is seen taking out a Sawn-off Double Barreled Shotgun with a taped grip from under Big Doug's (Eric Keenleyside) table.

Sawed off side by side shotgun - 12 gauge 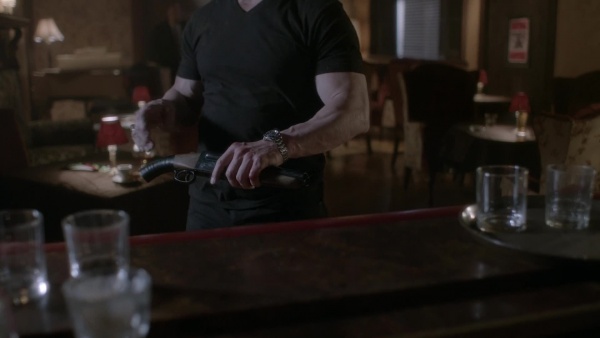