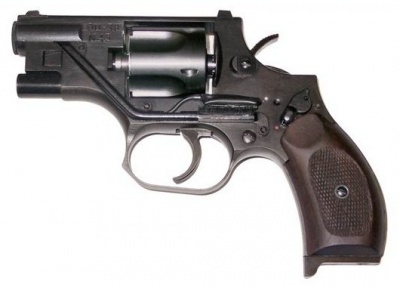 The OTs-38 is a Russian silent revolver developed in 2001 by Igor Stechkin and produced in 2002 onwards by the KBP Instrument Design Bureau. A rare weapon, it was adopted in limited numbers by the Russian military for special forces use, and by the Syrian special forces and special police units.

The weapon utilises the 7.62x42mm SP-4 cartridge (also used by the PSS), which is not rimmed, and therefore requires a moon clip for loading. The cartridge looks very odd - there is no spitzer point, or any point at all, simply a flat end to the round. This is because it uses a piston inside the cartridge to enable it to be silent; the powder ignites, the piston is struck and slams forward, fires the round and then seals the cartridge, letting no propellant gas escape. This makes the revolver incredibly quiet, to the point where live and dry firing sound almost the same. The only noise is the sound of the working parts moving about. It also means there is no muzzle flash.

The revolver fires from the bottom chamber, not the top one, like the Mateba Model 6 Unica and Chiappa Rhino, which aligns the recoil more closely in line with the shooter's hand and reduces muzzle climb. What looks like the "top barrel" is actually a built-in red laser sight. Other oddities of this revolver include a manual safety catch that locks a cocked hammer, enabling the revolver to be carried cocked with little danger for accidental discharge. Finally, the 5 round cylinder pivots out to the right, not the left, which is incredibly uncommon as most shooters are right-handed.

Though commonly called "OTs-38 Stechkin" on the internet, the name is actually a misnomer with an extraneous designer name formatted to falsely suggest that the gun is nicknamed "Stechkin"; unlike some other "OTs" guns like the OTs-02 Kiparis, the gun doesn't have an official nickname.

The OTs-38 and variants can be seen in the following films, television series, video games, and anime used by the following actors: