The following weapons were used in the film Marathon, The (Maratón):

A German warden in the hallway of prison pulls his sidearm on rebel prisoners.

One of the insurgents (Vilém Besser) in the school holds a trophy Luger P08 and pick up also Karabiner 98k rifle.

The German commander (Antonín Molcík) in the school shoots from a Luger P08.

A Luger P08 is holding by German Major (Karel Hlusicka) in the field camp.

German soldiers and Czech insurgents, including the main characters, are seen with MP40 submachine guns.

The motorized patrol of German military police (Jaroslav Mareš and Jan Skopecek) with MP40 on their backs.

Ruda Strecha (Jaromír Hanzlík) sends the dose from submachine gun into the SS on the stairwell.

The SS-man (Karel Hábl) with a MP40 in hand seeks Ruda and Karla on the roof of the house.

SS-soldiers firing from a rifles on insurgents in a battle for the school building.

A man with glasses in a truck (Josef Kemr) allocates to insurgents rifles.

Insurgents armed with Karabiner 98k rifles on their backs in the streets of Prague.

Ruda (Jaromír Hanzlík) loot during the battle for the school building a German rifle.

Ruda is proud of his first trophy ...

Due to an mistake continuity in next scene has rifle the hooded front sight!

Some Czechoslovak soldiers are equipped with Mosin Nagant M44 carbines.

Ruda asked Karla for ammunition for the shotgun.

German watchman on the tower opened fire on the fleeing prisoners from a machine gun.

By the insurgents confiscated ZB26 machine gun is leaning against the wall next to the barricades.

This heavy machine gun is seen underfoot attacking soldiers on the left side.

One of the Czech insurgents holds a Model 24 Stielhandgranate during the fight in the school building.

The Soviet officer gave a sign from a SPSh Flare pistol, that the bridge is demining.

Czechoslovak soldiers in battle use a Vz. 52 mortar. This weapon is in WWII anachronistic. 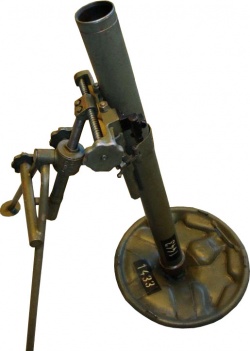 In the film is seen 76mm divisional gun M1942 (ZiS-3) in arsenal both warring parties.

ZiS-3 guns are fitted with unusual perforated muzzle brakes, supposedly fake as they seem to be not coaxial to barrels. 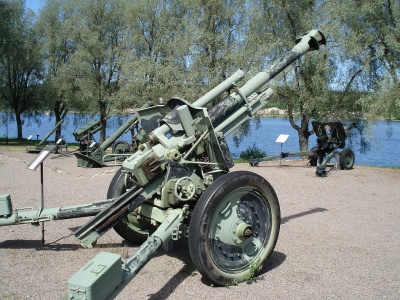 German tanks stormed the barricades in Prague. The head of is the Panzer IV.