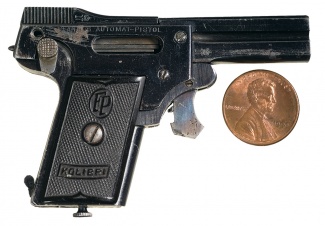 2mm Kolibri pistol with a US penny for scale - 2.7x9mm Kolibri

The Kolibri Pistol is the smallest centrefire semi-automatic in the world. Invented by Austro-Hungarian watchmaker Franz Pfannl, it was produced from 1913 to the mid-1920s in both single-shot and magazine-fed variants. Since technology of the time could not drill rifling into such a small barrel, it is a smoothbore. About 1,000 were made, with the gun primarily selling as a novelty.

The Kolibri's 2.7mm round is the smallest centrefire cartridge ever commercially produced, with the 3 foot-pound muzzle energy around half the UK limit for an air pistol to be purchased without requiring a firearm certificate. This is somewhat ironic given that as a cartridge-firing pistol, the Kolibri is now banned in Great Britain. The combination of pathetic muzzle energy and the smoothbore barrel rendered the Kolibri extremely inaccurate and practically useless as a weapon. Reloading the magazine generally required the use of tweezers.

It is not the world's smallest working gun: even more ridiculously tiny "weapons" exist, such as 2mm pinfire pistols (most of which can be stored inside a matchbox) and the 2.34mm rimfire SwissMiniGun Miniature Revolver C1ST (the latter having 0.71 foot-pounds of muzzle energy, less than the 1 foot-pound required for a bullet to actually inflict a penetrating injury). Most such firearms are impossible to import into the US due to the minimum dimension requirements of ATF Form 4590.

The Kolibri Pistol and variants can be seen in the following films, television series, video games, and anime used by the following actors: