The Hunchback of Soho (Der Bucklige von Soho) is a 1966 German detective movie directed by Alfred Vohrer. Young Wanda Merville (Monika Peitsch) arrives from New York to London to come for the inheritance but soon she is abducted and held in the reformatory for girls, controlled by administrator Alan Davis (Pinkas Braun) and Reverend David (Eddi Arent). In reality the reformatory is used to engage the girls in prostitution. Meanwhile Inspector Hopkins (Günther Stoll) of Scotland Yard investigate a row of murders of prostitutes who were cruelly strangled by a horrible hunchback. The investigation leads his to the trail of Wanda Merville.

The film is the 21st installment in the Rialto Film studio film series (1959-1972) and the first in the series to be shot in color. It isn't based directly on any of Wallace's works but takes some motifs.

The following weapons were used in the film The Hunchback of Soho (Der Bucklige von Soho): 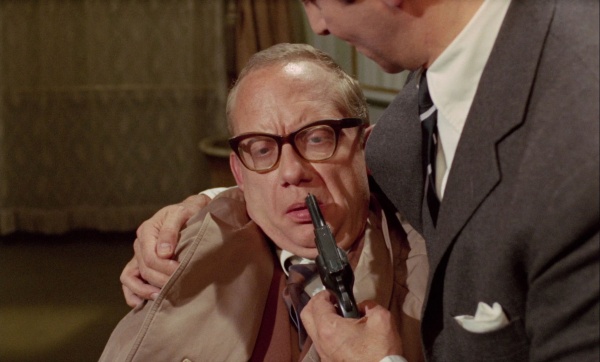 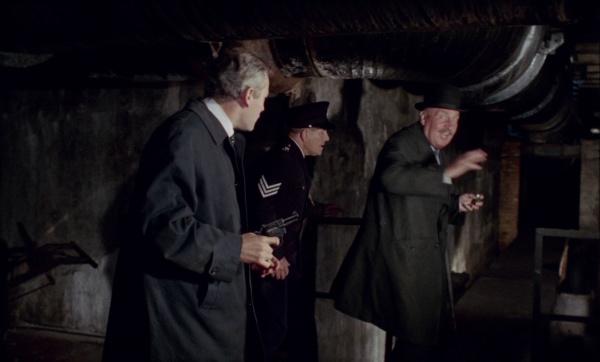 Hopkins holds his revolver when pursuing Davis in the sewers. 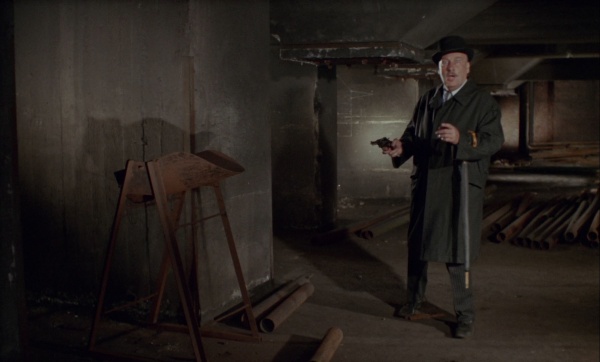 Sir John holds his revolver in the same scene. While the character appears in sixteen films of the Edgas Wallace series, this is the first of only two cases he holds a gun (after all, sir John is the head of Scotland Yard, not some ordinary detective!) 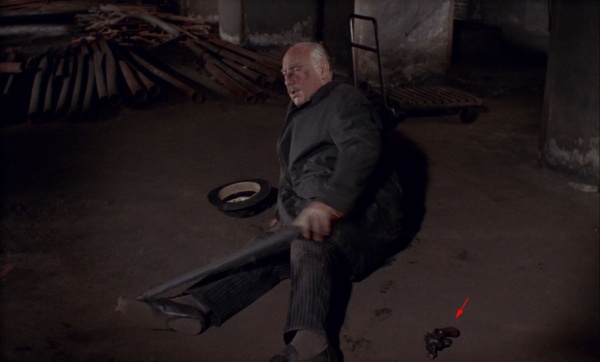 Sir John barely survives the attack and drops his gun. 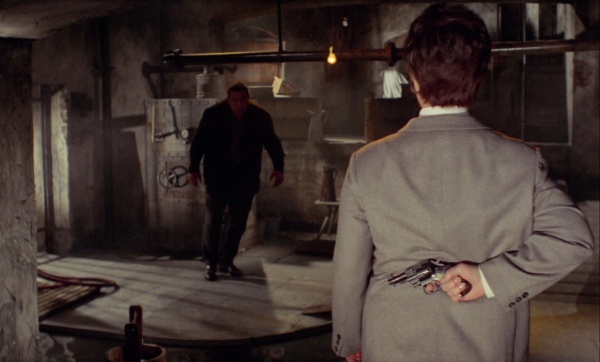 The overseer hides the revolver behind her back when she approaches to the Hunchback. 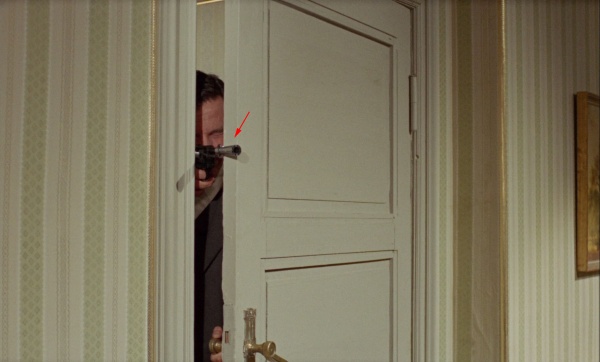 Davis fires the "suppressed" revolver. This "suppressor" in reality is the muzzle adapter for launching the signal flares. 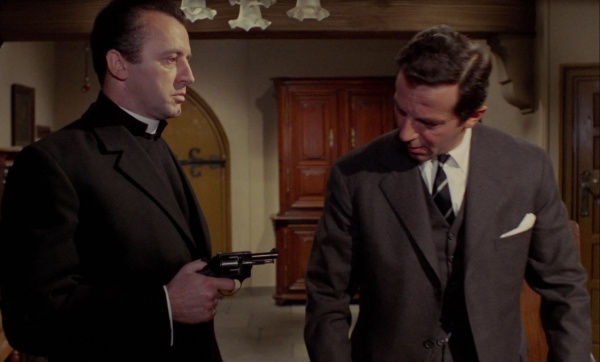 Reverend David aims the revolver at his accomplice Davis. 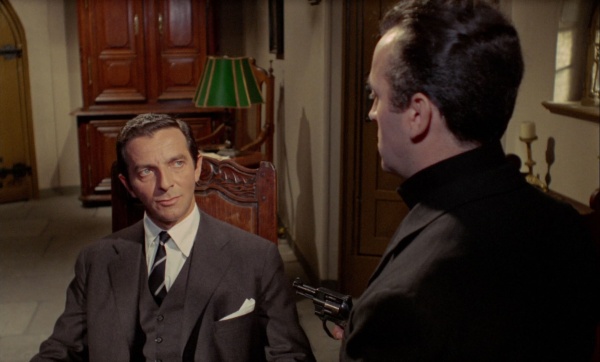 Another view of Rev. David's gun in the same scene. 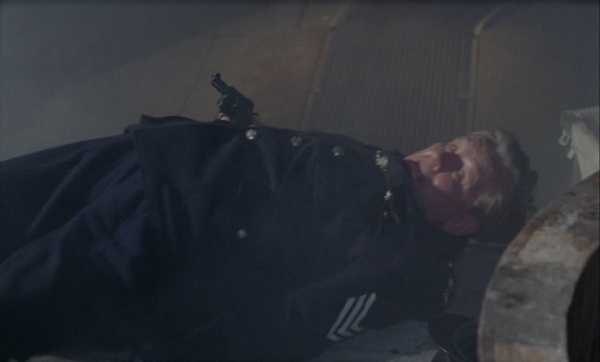 The sergeant is hit by Hunchback when trying to arrest him. 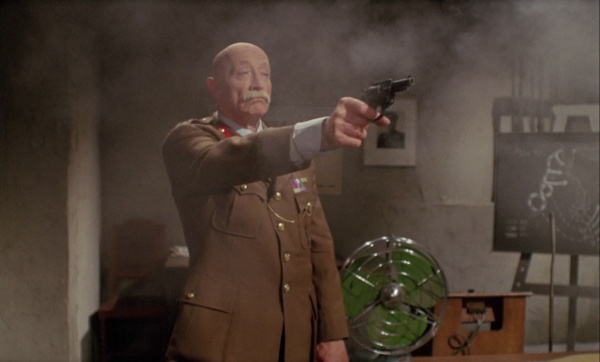 Gen. Perkins fires a revolver in the final scene.

A revolver is briefly seen in the gun cabinet in Gen. Perkins' estate. Judging by the shape of the grip, this gun is most likely a target weapon. 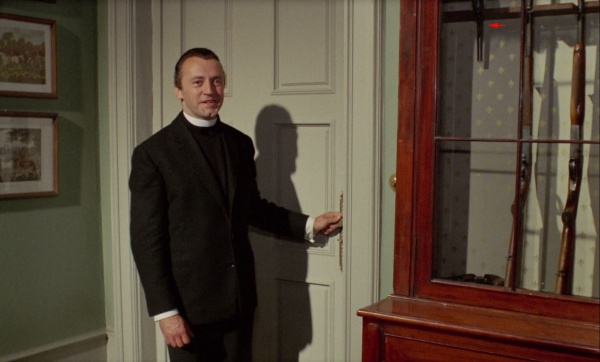 The barrel of the revolver is seen at the top left of the gun cabinet. 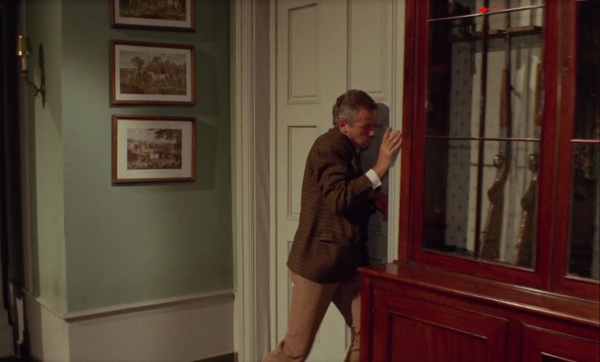 The shape of the grip of the revolver resembles target guns.

One more revolver (or maybe a target pistol) is seen on the bottom of the cabinet. 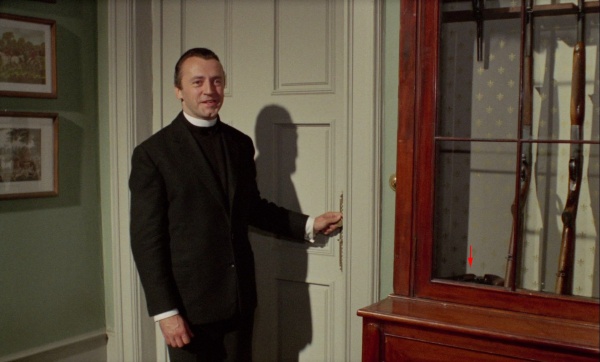 The handgun is seen on the bottom left of the gun cabinet. 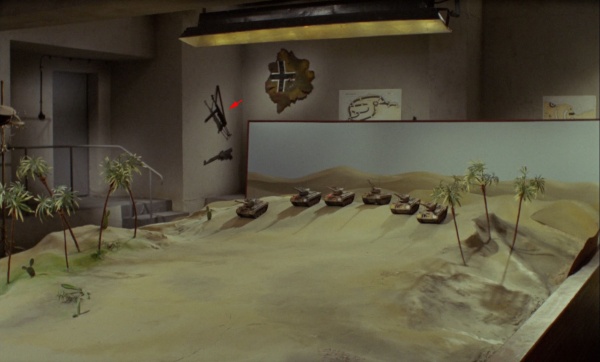 An MP40 and a Sturmgewehr 44 (without buttstock and magazine) are seen on the wall.

A Sturmgewehr 44 without buttstock and magazine is seen on the wall in Gen. Perkins' "war room". 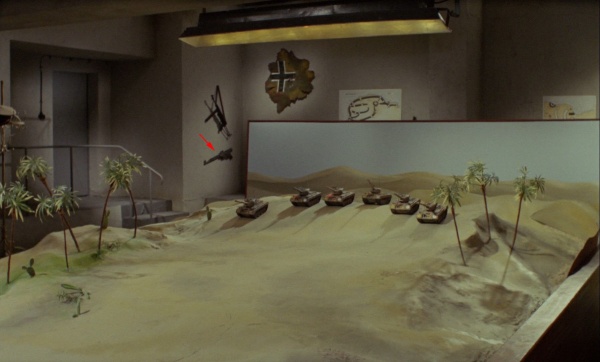 An MP40 and an Sturmgewehr 44 are seen on the wall. 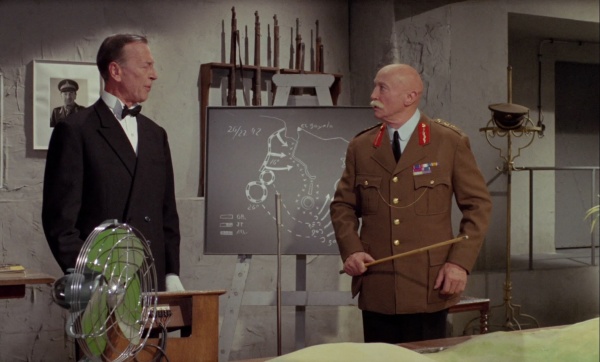 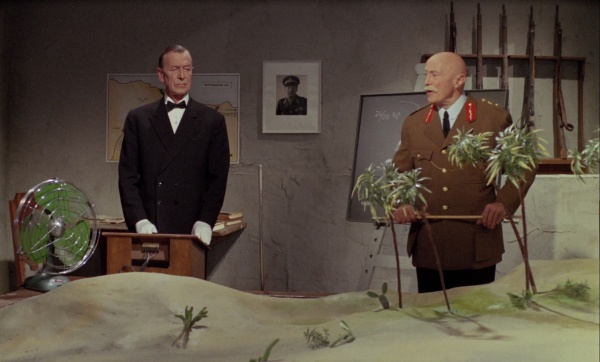 Another view of the gun rack. 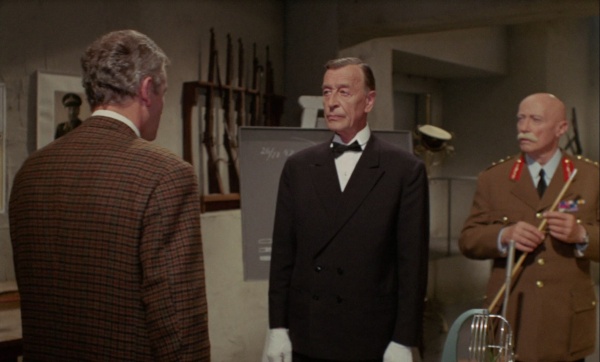 The stocks of two rifles are seen.

Five long guns are seen in the gun cabinet in Gen. Perkins' estate. 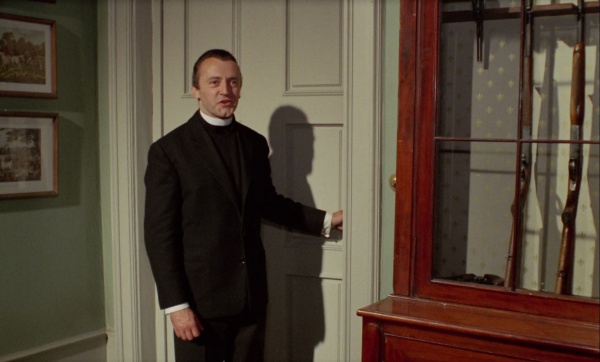 Two single barreled shotguns or top-break rifles are seen in the left part of the gun cabinet, together with two revolvers. 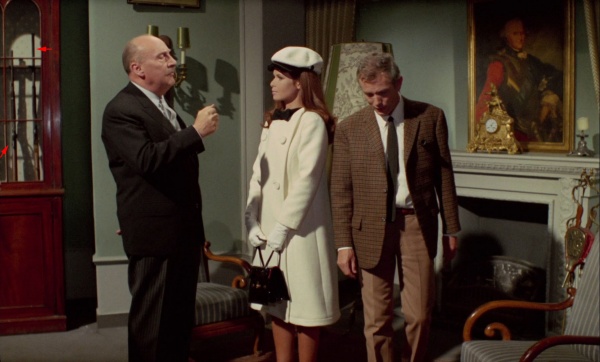 Two of the three long guns in the right part of the gun cabinet. The one at the right has a very long barrel. 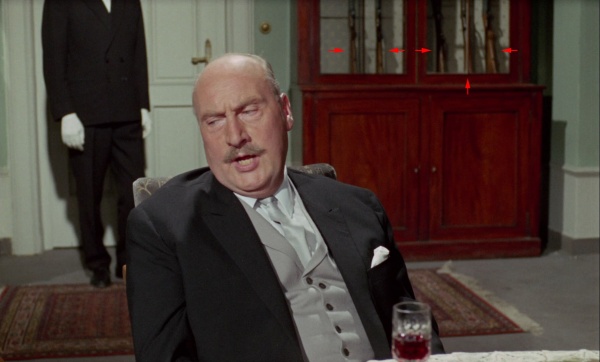 The stocks of all five guns are seen. 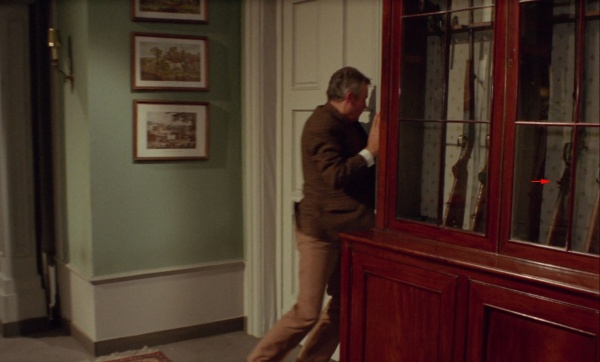 One of the guns in the right part has a large trigger guard connected with a kind of lever. Maybe it's a kind of Schuetzen (target) rifles with falling block action. 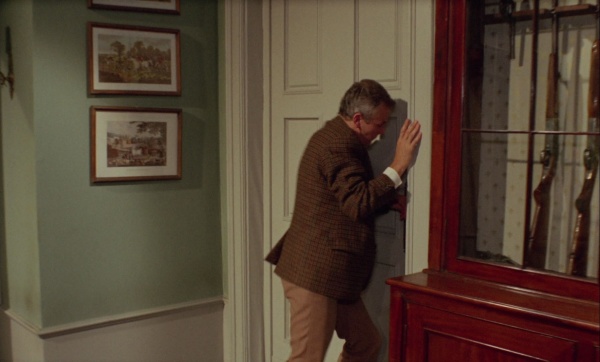 Two guns in the left part are seen. 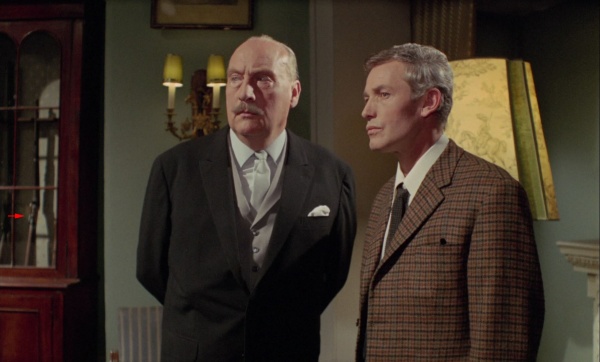 The gun at the far right also seems to have a kind of lever. 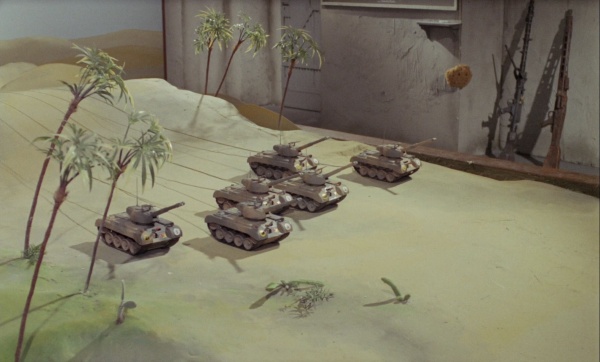 An MG34 leans against the wall together with an MG42. 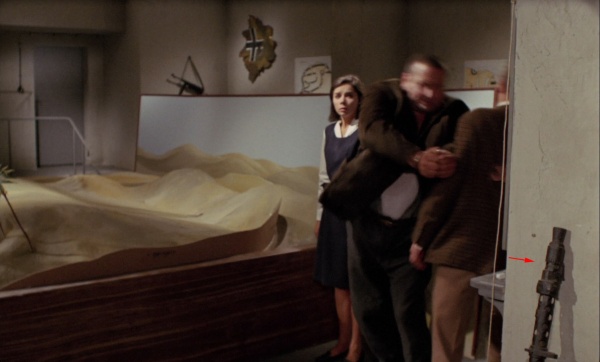 The barrel of the MG34 is seen at the right.

A very rusty looking MG42 leans against the wall together with an MG34.

In his "war room" Gen. Perkins recreates the Battle for Tobruk. Toy tanks that he uses to represent the troops under his command look very different from wartime models, especially from British ones. 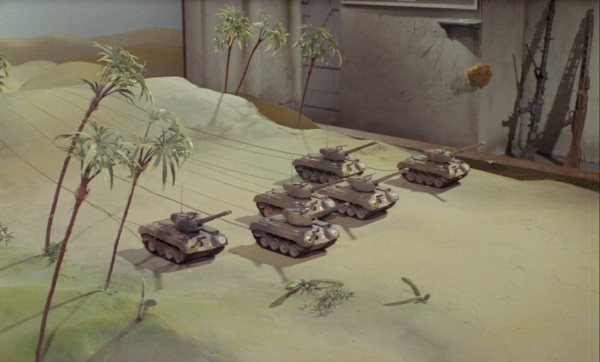 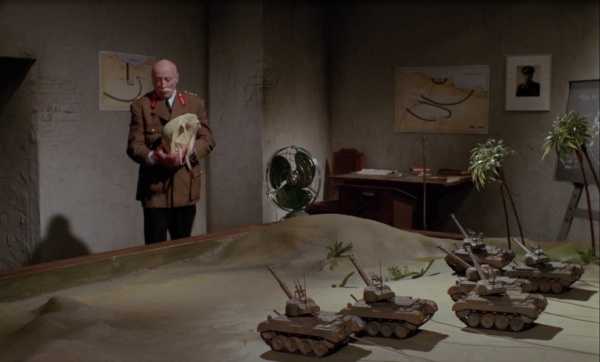